New Podcast Aims to Change the Conversation About Public Transit 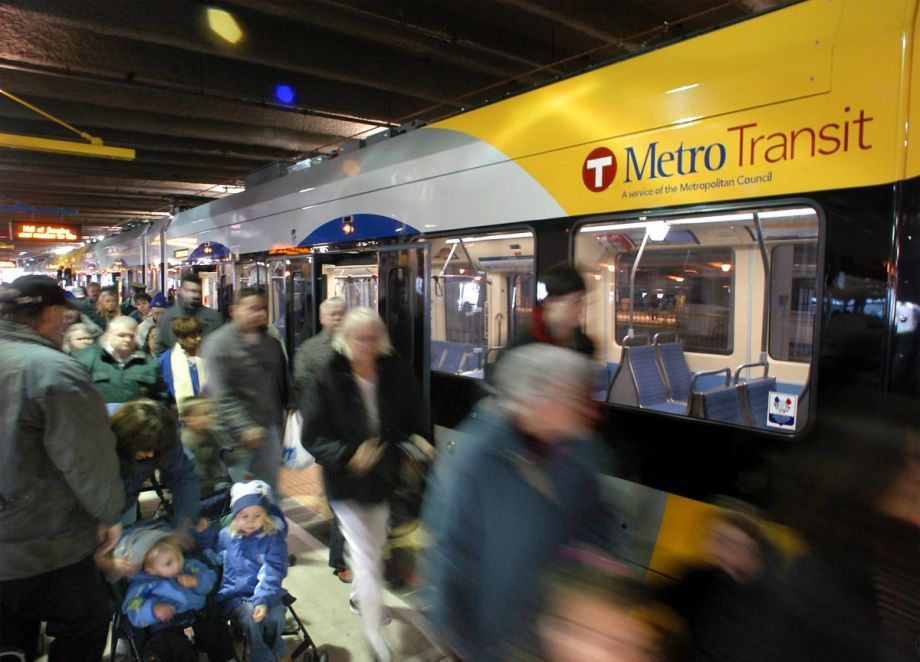 From the back seat of a Lyft to a walk in the neighborhood with an aging resident, a new podcast tags along with Twin Cities residents on their daily commutes in an attempt to illustrate how big transportation discussions play out in individuals’ lives.

Each episode of “Here to There,” by local public affairs agency Apparatus and the transportation advocates at Transit for Livable Communities and St. Paul Smart Trips (the latter two merged in January), takes on a different facet of transportation: health, sustainability, employment, accessibility and more.

Co-host Laura Monn Ginsburg says the show is driven by a simple reality. “I have to get from here to there every day. How do I do it, what are my choices, do I even really feel like I have a choice?” she asks. “If we’re talking about a topic as broad as health, as broad as equity, as broad as accessibility, how do we remember that there are individuals living these things out day to day?”

In the first half of each episode, she and co-host Leili Fatehi join a Twin Cities resident for an actual trip, and then talk to an expert or advocate for a broader perspective. For a show on transit and employment, they ride along with a Lyft driver and popular local DJ who talks about the uncertainty of making rent in the gig economy. In the second half, they speak to a transit union president about how, perhaps paradoxically, this rise of transportation gig work is coinciding with a labor shortage for more traditional transit jobs like bus drivers, despite their relatively good pay and dependable schedules.

In another — Ginsburg’s favorite episode so far, she admits — she interviews her own dad, a super commuter who has been crossing the entire Minneapolis-St. Paul metro area daily for 10 years. It’s not a perfect arrangement, he says, but he’s found ways to make the experience comfortable: exiting the highway when possible to drive through neighborhoods he describes as “relaxing” and “familiar.” And yet, though there’s no convenient transit option that would take him to work, he expresses support for public transportation.

“I think public transportation is a quality of life, and a quality of city life, that speaks to the vibrancy of your city,” he says, the rumble of his tires on the highway audible beneath him.

That nuance is too often missing, says Fatehi.

“The conversation around transportation has really been dominated by legislative controversy like funding for transit versus funding for roads,” she says. “We felt like that has dominated so much of the public face of what is the transportation conversation in Minnesota that we felt like we needed some sort of a venue to look beyond just that to what else is happening, what else matters.”

But talk of funding transit and multimodality does resurface, episode after episode. Jessica Treat, executive director of Transit for Livable Communities and St. Paul Smart Trips, sums up the issue this way: “We’re a region where, still, really car is king and seeing past that and building for the future has been challenging.” On top of that, she says, the impacts of a lacking transit system aren’t felt equally. “There’s a lot of people who can’t access jobs because the jobs are often disconnected from where low-income people and people of color are living.”

The Twin Cities assess a quarter-cent sales tax for transit, which recently funded a new light-rail line linking Minneapolis and St. Paul’s downtowns. For years, advocacy groups have been pushing to increase the sales tax, but it’s not been easy, especially now that both the state house and senate are Republican controlled.

“There’s this notion that multimodality only benefits people in the metro area, and everyone else in the state is paying for it and not reaping any benefits. And that’s just not accurate,” says Fatehi. But the perception of an urban-rural, driver-transit rider divide has fueled partisan gridlock.

Treat hopes the podcast is able to add complexity to the conversation, and demonstrate why funding transit is important for everyone — even those who mostly drive. The website for “Here to There” also hosts a survey that invites residents to share their own commuting stories. While the majority of respondents so far have said their primary mode is a private vehicle, many also report using a vast array of tools, and many of the drivers express frustration.

“Commuting in general is awful — I would rather teleport immediately to where I want to be,” says one anonymous respondent. “I absolutely hate driving a single passenger private vehicle, but have been unable to find anyone who commutes the same trip with flexible hours to accommodate my school schedule.”

Flexibility is the subject of another episode on car-sharing, and the impact on one resident when Car2Go left Minneapolis. The podcast also takes on the damaging legacy of highway construction and a project to mitigate it, the future of electric and self-driving vehicles, and the health benefits of cycling. In a future episode — Fatehi’s favorite — the hosts go on an accessibility walk with a local disability activist, navigating a supposedly pedestrian-friendly part of town in a wheelchair and wearing goggles that simulate blindness. “I really think anyone who is a planner should have to do this,” she says.

Six episodes are online already; all 10 will be up by end of July.