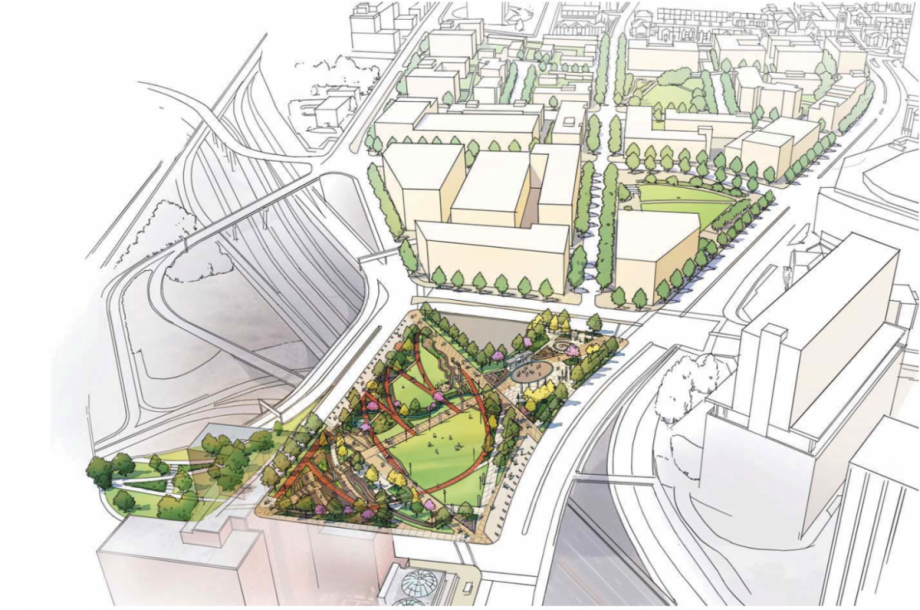 A new park in Pittsburgh will attempt to reconnect the Hill District to downtown, while striving to honor the past and future of this historically black neighborhood. Like many low-income neighborhoods of color, the Hill District was gutted by urban renewal projects and cut off from downtown by a highway project in the 1950s. Now a new park capping I-579 will create a pedestrian link and a much-needed green space, all in the spirit of the Sankofa bird.

As a sign in the new I-579 Cap Park will explain, the Sankofa is a symbol of a bird looking over its shoulder. It’s an Akan word from Ghana meaning “to go back in order to move forward.” While the Hill District community gave input on what they wanted from the park’s design, the Sankofa kept coming up, but it wasn’t clear how to incorporate it.

“And finally somebody realized that the overall shape of the sidewalks, somebody got a piece of paper and traced over it was like hey, this has been here this whole time,” says Dan McDowell, senior associate at LaQuatra Bonci Associates, the landscape architect firm on this project. The sidewalks layout already resembled a bird looking over its shoulder. “So it really worked out strangely. But it was an element that was there that we didn’t really necessarily design on purpose. It kind of just showed up.”

Awarded a $19 million federal Transportation Investment Generating Economic Recovery, or TIGER, grant, the $26.4 million park will include signage about Sankofa and the history of the Hill District. The Lower Hill had been a densely populated, largely African-American neighborhood when it was declared blighted after World War II. Over 8,000 residents and 413 businesses were forced to move; 1300 buildings on 95 acres were demolished. Very little replaced them, save for a sports arena and I-579. Both were devastating for the neighborhood. Surface parking replaced what had been a thriving neighborhood. The population dropped from 53,648 in 1950 to 9,537 in 2013. Unemployment in the Hill District was 21.2 percent in 2013, and 41 percent of residents were living below the poverty line.

These ill effects of highway-building on poor communities of color has gained increased recognition in recent years. Former DOT Secretary Anthony Foxx, drew attention to these inequities during his tenure in the Obama administration. “We now know — overwhelmingly — that our urban freeways were routed through low-income neighborhoods,” he said at a 2016 lecture. “Instead of connecting us to each other, highway decision-makers separated us.”

That’s certainly what happened with the Hill District. “When you’re walking by the site, I mean it is a giant hole,” says McDowell.

Today, says Doug Straley, project executive of Pittsburgh’s Sports and Exhibition Authority, the only pedestrian links from the Hill District to downtown are narrow sidewalks alongside major roads. There’s no real bike pathway to speak of. The cap park will provide both, while also creating a space for people to stay and linger.

During the design phase, LaQuatra Bonci and the Sports and Exhibition Authority, which is leading this project, sought input from the community. Three local artists worked with national artists to design components — Pittsburgh artists Amir Rashidd and Dr. Kimberly Ellis, Pittsburgh artist and designer Lakeisha Byrd, and Baltimore artist Jann Rosen-Queralt. Some of the elements they worked on included a set of sculptures inspired by braided hair, an outdoor classroom with musical instruments, and walls describing the historic lives of Hill District residents Martin Delaney and Frankie Pace. The community also helped design “Keisha,” an illustrated girl who will feature on park signage. She’ll point people to look up for the big dipper with signs referring to “Follow the Drinking Gourd,” one of the songs used by Underground Railroad operatives to encode escape instructions to head north. Many who followed the Underground Railroad, “Keisha” will explain, remained in the Hill District.

The park will also include an amphitheater, lawn, pollinator garden, novel stormwater management tools, and educational signs about them. The site will be ADA accessible. The city will start bidding for construction later this year, and expects the cap will take two years to build.

It’s all part of a larger change coming to the Hill District. The Civic Arena, for which so much of the Lower Hill was demolished, was itself torn down in 2012. Since then, the city has been in a years-long struggle with the Pittsburgh Penguins hockey team — which owns the site — to redevelop it. Last year, they unveiled a plan for a mixed use development, including an entertainment district, office space, and residential, to replace the existing seas of surface parking. That development is adjacent to the cap park, which will connect the new project to downtown.

UPDATE: We’ve added the names of the local and national artists who worked on this project.