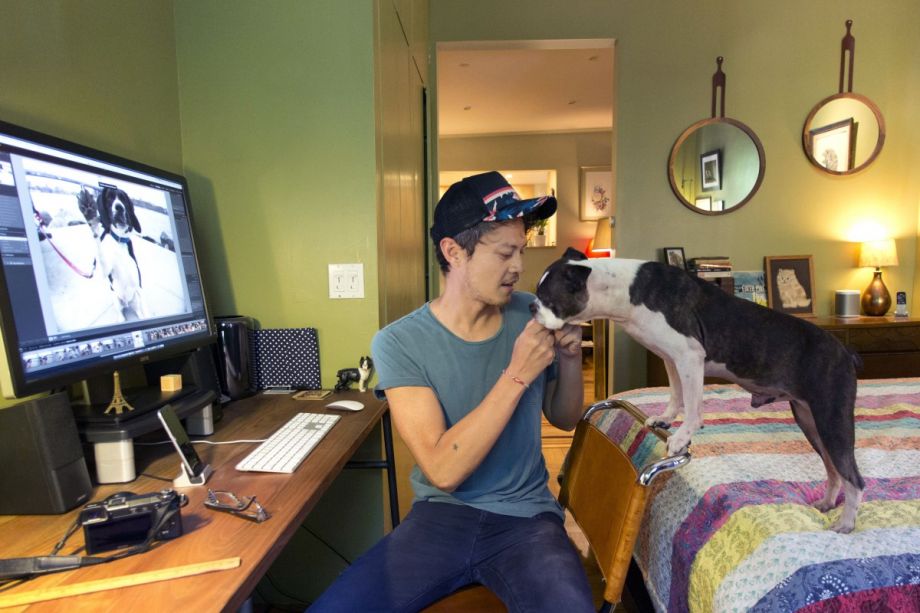 Freelance web designer Henry Brown pauses from his work at his New York apartment to give his dog Yogi a snack. (AP Photo/Mark Lennihan)

New York City may become the first city in the country to have a labor law protecting freelancers from wage theft. City Council unanimously passed a bill Thursday to ensure freelancers are paid in full and on time, according to Bloomberg BNA.

If Mayor Bill de Basio signs the Freelance Isn’t Free Act into law, as his administration has indicated he will, employers will have a 30 days after a freelancer’s work is completed (or another agreed upon amount of time) to pay the freelancer.

Employers who delay or deny payment will face harsh penalties, and workers will be entitled to double damages and attorney fees. The bill also requires written contracts for any projects for which the freelancer will be paid $800 or more.

According to a 2014 survey, freelancers lose an average of $5,968 in unpaid income yearly, detracting 13 percent of the average survey respondent’s annual income. Half of freelancers said they had trouble getting paid in 2014, and 71 percent said they have had trouble collecting payment at some point in their career.

The Freelancers Union, a group with around 150,000 members that advocates on behalf of “gig economy workers,” vocally supported the bill, calling it the “first of its kind” in the nation. The Freelancers Union worked closely with NYC Council Member Brad Lander and his policy team as Lander drafted the bill. Lander told Next City in September that policymakers still have a lot to learn about protecting gig economy workers.

“When you start to uncover the challenges of putting together a stable living, there’s got to be a way for people to have that,” Lander said. “It’s the erosion of the ability to put together a life around the job that you earn a living from and organize the rest of your life around. That has gotten even harder for people as a consequence of the flexibility that consumers are looking for and the profit that companies who rely on this model are pushing for.”