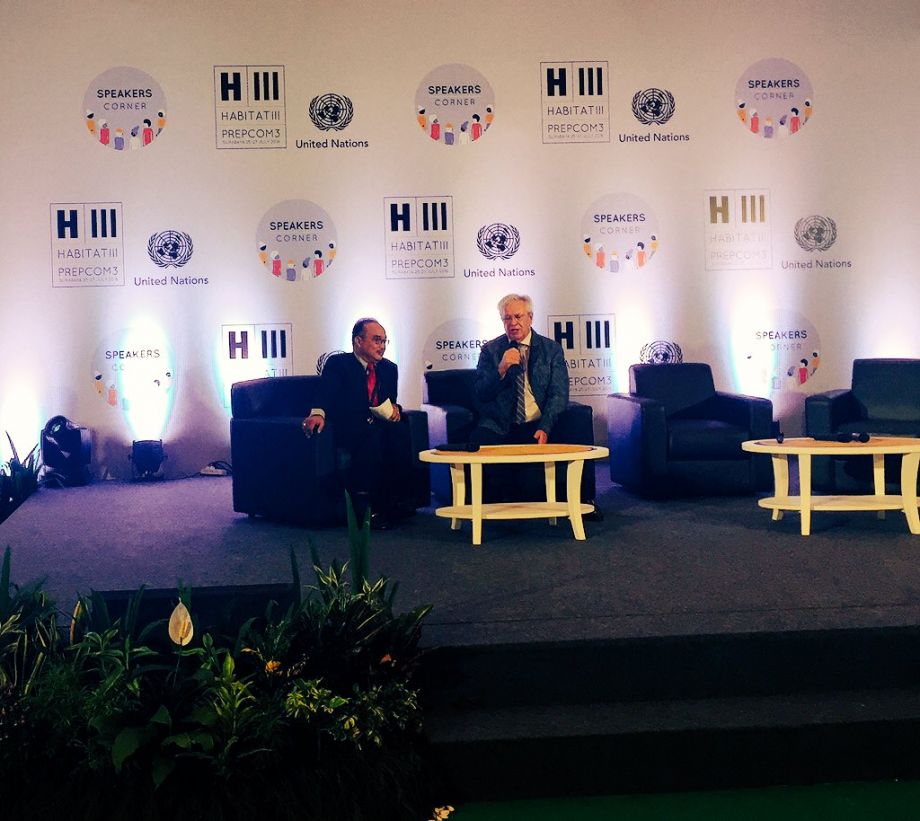 Three days of occasionally round-the-clock talks failed to deliver an agreement this week on the New Urban Agenda, the United Nations’ urbanization strategy set to be adopted at the Habitat III conference this October in Quito, Ecuador.

Diplomats met in the Indonesian city of Surabaya in an ambitious attempt to hammer out the non-binding document, which will provide national governments with guidelines on the growth and development of cities for the next two decades. Demographers predict nearly 70 percent of the world’s population will be urban by 2050.

The negotiations in Surabaya, known as PrepCom 3, were the final formal talks on the calendar ahead of the October summit. The first draft of the New Urban Agenda was released in May, and for the past two and a half months, diplomats have been recommending edits to the document at informal talks in New York.

That process had yielded two subsequent drafts (now joined by a third). The hope this week was that three days of negotiations in Surabaya, structured as formal talks, would bring in a wider pool of countries that would ultimately settle the document.

Such an outcome would have alleviated the need for intense negotiations in Quito and allow that four-day summit to focus more on the agenda’s implementation. With consensus assured, governments also would be more likely to send ministerial or higher-ranking officials.

But this was not to be. Negotiators now have indicated that informal talks will reconvene in New York in September, with the hopes of bringing a complete or near-complete agreement to Quito. Dates have not yet been set for that next round.

Progress stalled
Much of the negotiations in Surabaya were conducted behind closed doors. But despite sessions that stretched into the wee hours of the morning, the core set of players — Canada, Brazil, Colombia, Ecuador, European Union, Japan, Thailand and the United States — could not resolve fundamental impasses on key issues.

These tension points remained the same as they have over recent weeks, with disagreement centering particularly on role of human rights in the document and the future of UN-Habitat, the lead agency on urbanization.

After an announced 30-minute break turned into a six-hour wait Wednesday night, diplomats finally raised the white flag and signaled that talks had stalled at 2 a. m. on Thursday.

“Good morning, colleagues, again. Still a pleasure to be here — to some extent,” deadpanned Colombia’s Isabel Cavelier to muted laughter in the exhausted chamber. She led negotiations on behalf of the Group of 77 (G77) bloc of developing countries on the contentious final section of the document, which discusses how to track progress on the New Urban Agenda.

“Every time we are asked, we report we are making progress,” Cavelier continued. “We have now exhausted our ability to make progress.”

Her counterpart, the European Union’s Isabelle Delattre, concurred, saying that there was no immediate way forward in Surabaya.

“We are not yet able to agree on anything,” she said, although she noted that progress had been made with the issuance of a new draft on Wednesday at midday. But, she cautioned, “This is a fragile ensemble.”

Politics trumps policy
PrepCom 3 started on an encouraging note, with the host city rolling out the red carpet for the event, despite its procedural nature. Inside the plenary session, a parade of new faces reported their progress toward the 1996 Habitat Agenda — the result of the previous Habitat conference — and their hopes for the upcoming New Urban Agenda.

Upstairs, however, was where the negotiations took place, in what was known as “main committee.” As countries laid their cards on the table, it became clear that the needle had barely moved since the last round of New York talks and subsequent written comments.

A visitor writes on the wall of the Malaysian exhibition booth at Prepcom. (Credit: UN-Habitat)

On Monday, the G77 requested to meet privately and refine its positions, a move that curtailed the day’s talks. The action, in turn, did not heat up until Tuesday, but even then it quickly became mired in issues away from the core policy concerns of the New Urban Agenda.

Developed countries, led by the United States, fended off the inclusion of perennial debates in the UN’s social and economic documents. These include issues such as “common but differentiated responsibilities,” first agreed on in the Kyoto Protocol on climate change, and “unilateral economic measures” such as sanctions and tariffs.

“Precedence does not mean, by definition, relevance,” said a U. S. representative, Ian Klaus. “While negotiated documents have to reach careful political balance, language from one document cannot be imported into another document without taking context into account.”

A coalition of member states, led by Belarus, called for the inclusion of “family-friendly” language in the document, probably a parry against efforts by Canada and Mexico to insert references to LGBTQ rights.

Kenya, which coordinated the G77’s position on the meat of the New Urban Agenda — the middle section on commitments and implementation — delivered lengthy line edits. These included repeated requests that every time “urban” appears, it is preceded by “sustainable” and followed by “and territorial”. Several diplomats and observers in the room interpreted this as a stalling tactic to buy the G77 more time as it worked feverishly to hash out a deal on the UN-Habitat governance issues that have plagued the debate on the “follow-up and review” section.

When the talks arrived at that final section, Chad spoke on behalf of the African bloc of countries to reiterate its case for a strengthened UN-Habitat, which from its headquarters in Nairobi is seen as an important asset for countries in Africa and Asia. The Chadian delegate called for universal membership on the agency’s governing body and a “clear mandate” to oversee follow-up and review of the New Urban Agenda and coordinate the implementation of all other UN agreements on urban development and human settlements.

The European Union dismissed this call — which the African Group has been making for several months — out of hand. “This conference is not about the governance of agencies but about the policy,” the E. U. delegate retorted.

Nevertheless, it was clear that this issue dominated discussions behind closed doors, much more so than the other key point of controversy in the New Urban Agenda — the inclusion of a reference to the “right to the city.” This concept is not recognized by international human rights instruments but has a core group of supporters from Latin American governments and civil society.

One Latin American diplomat, speaking on the condition of anonymity, indicated that a proposal to keep a reference to the right to the city in the text appeared to have agreement. But since any such deal is part of a broader negotiation, the diplomat said, it is impossible to confirm that the issue is settled until the whole document is settled.

This story originally appeared in Citiscope and was republished via the Habitat III Journalism Project.