There’s a Reason MonkeyParking Thought Its App Would Fly in S.F. – Next City

There’s a Reason MonkeyParking Thought Its App Would Fly in S.F. 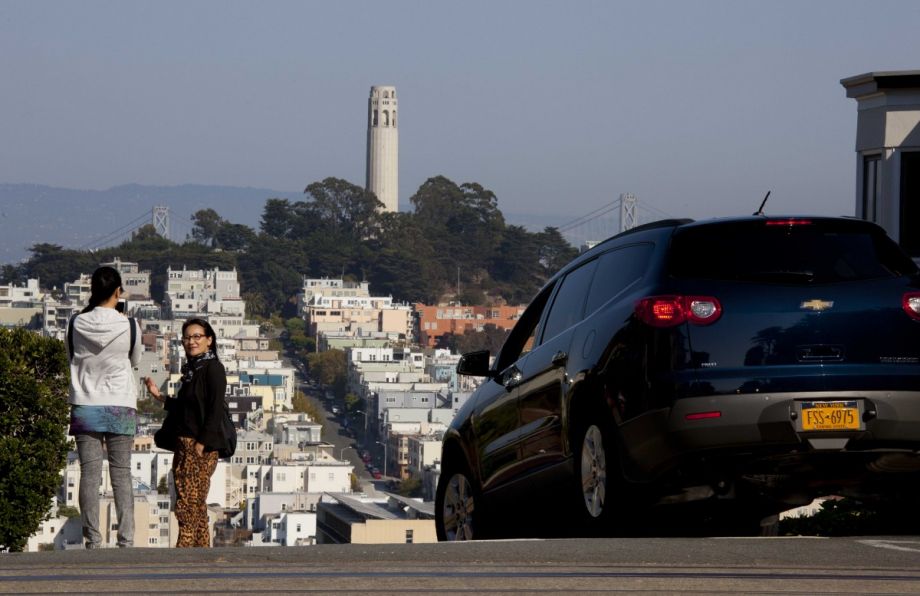 A parking space auction app might sound good to a city driver who has spent 45 minutes circling for a spot. (AP Photo/Eric Risberg)

MonkeyParking, an app that allows users to auction off public parking spaces, seems like an obvious fail. When San Francisco officials slapped its developers with a cease-and-desist Monday, post after post took its very existence to task. Making money off public streets? That violates what a Wired writer called the “kindergarten definition of sharing.” “Obviously you can’t sell public property,” a Techly.com contributor wrote.

Or can you? In the tech bedroom that S.F. is rapidly becoming, you don’t need to be a Rebecca Solnit fan to know exactly what the Google Bus represents. This is a place where Lyft undercuts state-regulated taxis; where 75 percent of public housing is slated for privatization; where the term “privately owned public open space” (or the cuter “popos”) is embedded in both the regional lexicon and the city zoning codes. Can’t you almost forgive MonkeyParking’s Italian developers for thinking that — at least in San Francisco — selling off bits of the shared cityscape just might fly?

This is how the app works: A map pops up full of smiling monkeys on green dots, each connected to a driver in a parked car who’s about to leave. You bid from $5 to $20 on a spot close to you. If you get the spot, you park and pay. Admittedly, it sounds far easier than circling a block for 45 minutes and then, finally, shelling out $15 to enter a parking garage.

“People are free to rent out their own private driveways and garage spaces should they choose to do so,” he says. “But we will not abide businesses that hold hostage on-street public parking spots for their own private profit.” (Dobrowolny plans to fight back.)

City parking may have a section 63© to clarify its public status, but buses, housing and parks do not. As tech firms and developers revamp, undercut and buy up these spaces, the city’s shared systems increasingly resemble parking spots on the auction block. Does this infrastructure still belong to everyone, or will it always go to the person with the highest bid?

Take transportation. It’s certainly not illegal for a corporation to provide its workers with transit. And the much-maligned Facebook, Apple and Google shuttles serve a real need, transporting employees to outlying tech suburbs where buses are scarce. But they also encroach on the tax-funded transit system. As newspapers have detailed, many illegally use the stops meant for MUNI, slowing everyone down. They operate on the same roads and infrastructure, but without collecting maintenance fares.

It can’t be said with certainty that corporate shuttles undercut public transit by stealing ridership — since they aren’t subject to public information laws, state workers investigating them have barely been able to determine their routes. But along with ride-shares like UberX and Lyft, they tilt the system in less obvious ways. A New York magazine article during the BART strike last year pointed out that private transit profits from such shut-downs — for a fee, from riders who can afford that fee. In other words, a strike or a late train or an unreliable bus inconveniences only the bottom-earners, while top-earners can shop around, creating a two-tier system with disparate efficiencies.

Then there’s public housing. As the Bay Guardian has been covering in great detail, the San Francisco Public Housing Authority is slated for privatization. Again, many advantages come with this switch to a mix of developers and non-profits — the SFHA had a backlog of about $270 million in deferred maintenance costs and its director was recently fired for discrimination, among other things. But privatization also brings many unknowns, including the processes by which new tenants will be screened and whether nearly 200 unionized jobs will be cut.

And as city parks are leased out for promotional events and galas, an even stranger example of the city’s investor-owned landscape has come into focus. Privately owned public open spaces are lobby plazas and rooftop balconies that few people knew about until recently. Their creation was a novel part of the city’s 1985 general plan, requiring that developers provide a set amount of space open to the public. It was a great idea, but until 2012, few of them were actually advertised — the San Francisco Chronicle described one enclosed space where the sign outside was five inches long at knee height. When the city became more specific in its signage rules, at least one business owner worried that these spaces would attract “homeless vagrants” and druggies, raising the question of how public these popos really are.

An app full of grinning monkeys may be the most obvious blunder in the city’s new sharing (for money) economy. But it’s not without precedent. Specific municipal codes undid this latest start-up, but the questions it raises about public space are far from clear. In the new San Francisco, what belongs to everyone? And what can be suddenly co-opted by someone with a novel idea and plenty of cash?