Minneapolis Parks Thinking About Inclusion for People With Invisible Disabilities 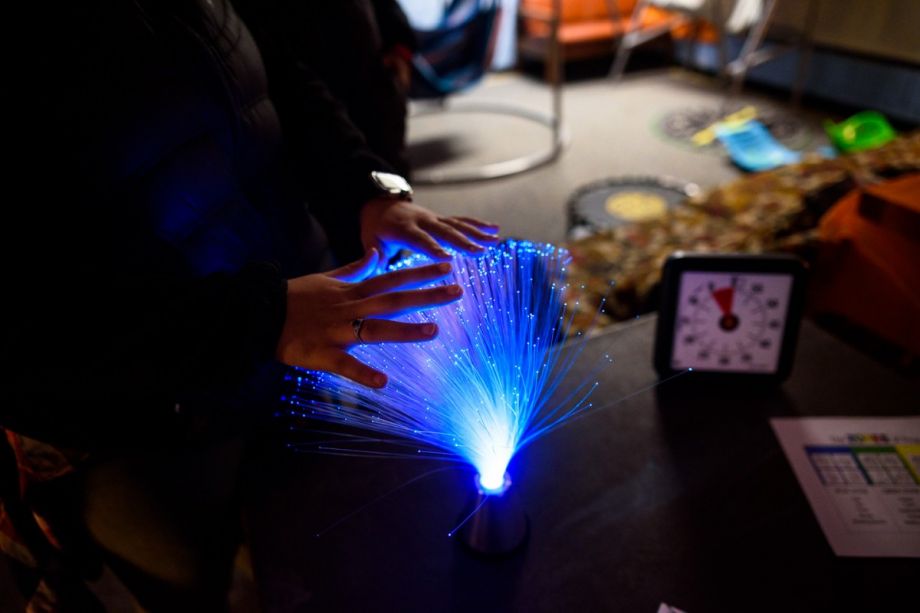 A fiber-optic lamp at an indoor sensory space in Minneapolis. Come summer, the parks and recreation board will take sensory-stimulating tools like this to parks events, calling it the Sense Tent for people with autism and other sensory processing disorders. (Courtesy MPRB)

Loud, crowded and often held in the hot days of summer—outdoor concert and movies in the park and summer festivals can be intense experiences for anyone. For someone with autism or another sensory processing disorder, the experience can be overwhelming, which can lead to increased trouble with communication, shutdowns and other problems. Because of this, some people with autism and families of children with autism choose to just skip such public events rather than risking the issue.

The Minneapolis Parks and Recreation Board doesn’t want people to have to make that choice. In an effort to make its events more inclusive, MPRB is piloting a program called Sense Tents. The tents will provide a space at events where people with sensory processing disorders can go to either or soothe or stimulate their senses when they’re overwhelmed.

“Creating an alternative space to take a break from the hubbub is a good way to provide sensory accommodation,” says Ellie Wilson, executive director of the Autism Society of Minnesota, which consulted on the Sense Tents project. “There are lots of people with invisible disabilities. This is about understanding the needs of the broader disability community, offering broader accessibility and creating opportunities for success for people with those disabilities.”

Though the Sense Tents project will eventually be held in literal tents at outdoor events, MPRB launched an indoor version at last week’s Martin Luther King, Jr. Day event. They had a room separated from the event with a collection of tools and toys meant to both calm and stimulate the senses.

For some people with sensory processing disorders, it can be just as important to get more of a given sense. So the Tents provide noise-cancelling headphones, but also headphones that play soothing music or sounds. They also have toys such as a fiber-optic lamp that changes color and has strings popping out the top, stimulating both touch and sight. They have foams and slime, scented crayons, a mini-trampoline, calming lights and more. In the summer, they’ll set up a sensory swing, which is sort of like a large hammock that hugs you.

“My goal is to make sure people feel comfortable,” says Sarah Thorsen, MPRB’s Therapeutic Recreation and Inclusion Coordinator. “With something like this, you can have a place to go, you can still experience the events. And we can keep people engaged in our events and programing.”

This summer, the plan is to use Sense Tents at outdoor concerts and movies in Minneapolis parks. They also plan to have something like Sensory Sundays where the Sense Tents will be set up. The primary goal of the program is to make events more inclusive. But Thorsen says they also want to use it as a teaching tool for people who may not know much about autism or sensory processing disorders.

Sense Tents was funded by a micro-grant from the National Recreation and Park Association. The Association funded four projects meant to make parks and recreation programs more inclusive for people with physical and cognitive disabilities. In addition to Minneapolis, the association funded a project to bring adaptive cycles to Austin, an effort to increase physical accessibility at Pritchard, AL’s community gardens and a Philadelphia Parks and Recreation Department program to teach pre-schoolers, both those who are neurotypical and those on the autism spectrum, about backyard nature. (The association also supports Next City.)

Wilson says that “the sensory friendly movement is getting bigger and bigger.” In Minneapolis alone there are several businesses and institutions recognizing that they have to make a conscious effort to be inclusive to people with sensory processing disorders. The Walker Art Museum offers tours for people with autism and other developmental disabilities. Stages Theater has sensory-friendly performances of some productions, as does the Minnesota Orchestra.

Sense Tents are not the parks board’s first effort to be inclusive to people with autism and sensory processing disorders. Prior to this, the board had created calming boxes for children participating in the before- and after-school rec programs. Similar to the Sense Tents, the boxes had different toys to address sight, sound, touch and other senses.

MPRB’s accessibility and inclusion efforts go beyond Sense Tents as well. Thorsen is in charge of the therapeutic recreation and inclusion program. She works with the rec centers to make sure programs are physically accessible as well as inclusive. Sometimes that just entails training staff on better ways of communicating. The program also provides inclusion facilitators to assist a child or adult with a disability.

Wilson is excited to see MPRB and other institutions doing work to be more inclusive and thinks everyone should take their lead. She says, “We want to challenge communities to think about accessibility as part of their infrastructure. The ultimate goal is that somebody won’t have to go at a special time or a special place to get what they need; that as members of the public and valuable parts of their community, people will want to accommodate them wherever they are.”