The Virtuous Cycle of Keeping Your City Affordable for Artists 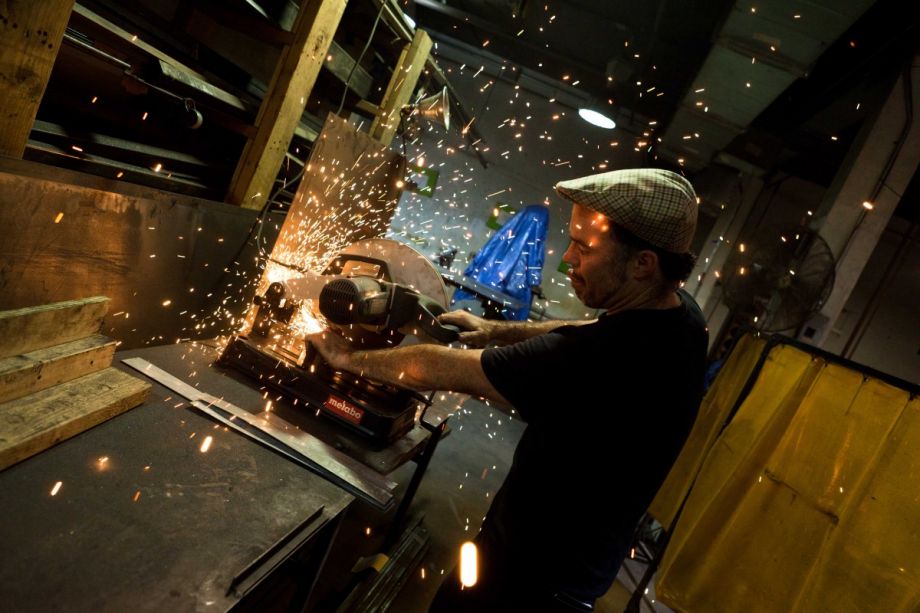 Ryan O’Connor prepares metal pieces for a class he instructs in an art space in Bushwick. (AP Photo/John Minchillo)

The creative sector is the engine of urban economic development. Designers, musicians, actors, artists and other creative professionals are a catalyst for growth – creating new businesses, enhancing existing ones and attracting new residents with their performances, designs, murals and other contributions to urban vibrancy. An investment in a city’s creative economy is an investment in its long-term growth and vitality.

New York City is a testament to this virtuous cycle. Recent employment growth has been driven by creative industries, including a 53 percent jump in film & television, 33 percent in architecture, 26 percent in the performing arts, 24 percent in advertising and 24 percent in visual arts. A recent report by the Center for an Urban Future found that employment in New York’s creative economy – consisting of ten industries (advertising, film and television, broadcasting, publishing, architecture, design, music, visual arts, performing arts and independent artists, writers and performers) and 25 occupations – grew by 13 percent over the last decade, from 260,770 to 295,755. Over this period, New York’s share of national creative sector jobs grew from 7.1 percent to 8.6 percent.

Moreover, the city’s creative sector has propelled its recent tech boom, with New York ad-, media-, art-, fashion-, design- and music-tech companies all achieving considerable success over the last decade. From Doubleclick and AppNexus to Buzzfeed and Gawker, from Artsy and Electric Objects to Gilt and Warby Parker, from Etsy and MakerBot to Next Big Sound and Genius—in nearly every creative field, the leaders in e-commerce, data analytics, social media and other tech enabled innovations have launched their companies in New York. These companies have leveraged New York’s pipeline of creative talent to build global enterprises.

Too often, however, the creative sector is a victim of its own success. Gravitating to affordable neighborhoods, creative professionals have become an emblem of gentrification, attracting interest in a new area while ultimately pricing themselves out. From SoHo to Chelsea, the East Village to Williamsburg, in cities like New York this is a recurring theme.

Over the last decade, this axiomatic story has been complicated and accelerated by a number of forces. As Americans renew their love affair with urban living, artists have been joined by 20-somethings of all professions, 30-somethings putting off marriage and childrearing and by Baby Boomers seeking a more livable and vibrant terrain upon retirement. As demand for housing soars, once available neighborhoods have become unaffordable to artists at a much faster rate, leaving them little time to cultivate the communities so critical to developing their practice. From 2000 to 2012, those New York neighborhoods most closely associated with the creative sector experienced the fastest increases in rent, with Greenpoint/ Williamsburg (76 percent rise), Fort Greene/Brooklyn Heights (58 percent), Bushwick (50 percent) and Bedford Stuyvesant (47 percent) leading the way.

With competition for housing escalating, artists are finding it increasingly difficult to afford space in the center of the city, where public transportation is most accessible and efficient. In New York, as creative professionals disperse from the Lower East Side to Williamsburg to Bushwick to Ridgewood, gaps in subway service are common and mobility within and between the outer boroughs highly restricted. For many creative professionals, commuting to auditions, rehearsals, performances and the office is becoming more and more time consuming.

This influx of new residents to cities like New York has been compounded by an influx of new businesses and business practices. As tech firms proliferate, they have eschewed the traditional cubicle and corner office layout for an open floor plan. Today, these firms are gravitating to the loft-style spaces that were once an affordable refuge for designers, visual artists and performing artists. As of 2012 information, media and tech firms occupied 25 percent of New York office space, up from 9 percent in 2002.

Soaring real estate prices, along with high student debt burdens and the proliferation of unpaid internships, are making it increasingly difficult for creative professionals to thrive. To combat these pressures, the Center for an Urban Future’s report lays out several recommendations.

First, cities around the country can take inspiration from New York’s Seniors Partnering with Artists Citywide (SPARC) program, where participating artists receive a stipend and access to senior center workspaces in exchange for providing arts programming and classes for the elderly. In New York and cities throughout the country, this program should be extended to libraries, recreation centers, public housing community centers, homeless shelters, public schools and churches. Providing artists with affordable spaces while offering arts programming to underserved populations like the homeless and public housing residents as well as the youth, senior and immigrant populations that frequent libraries, would be a win-win.

Second, cities and states should work to simplify affordable housing and healthcare applications for artists, many of whom are in non-traditional employment situations. Applying for government-subsidized housing programs hinges on the ability to project future earnings. For those whose income is a patchwork of different sources—as is the case with many creative professionals—this task can be onerous.

Finally, rather than developing isolated cultural plans, cities should embed cultural planning into all zoning and development documents. Culture is essential to healthy, happy, educated and engaged communities. City governments should take stock of existing artists, collectives, creative businesses, performing arts venues and arts education programs in each of their neighborhoods and work to cultivate a robust and balanced ecosystem.

Supporting and cultivating a vibrant creative sector is essential to success in today’s economy. As cities reassess their economic development strategies, they are realizing that attracting and developing talent is more fruitful than luring businesses with tax breaks and favorable rents. Creative professionals, in particular, help attract other talent and are highly entrepreneurial. To sustain and accelerate this virtuous cycle, governments must ensure their cities are affordable and hospitable to creative talent.

Adam Forman is a research associate at the Center for an Urban Future, a New York City-based think tank. He is the author of “Creative New York,” a report documenting the economic impact of New York’s creative industries and the obstacles to their continued success.