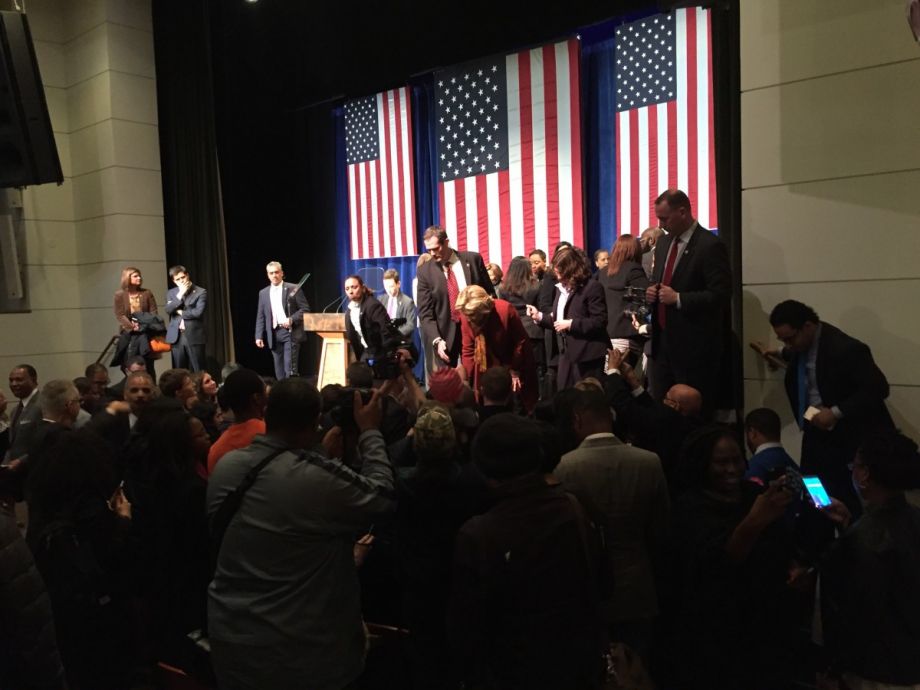 Harlem is not a monolith, nor are African-American voters. But according to a recent poll, 82 percent of African-American voters support Hillary Clinton for the Democratic nomination in this year’s presidential election. In Harlem yesterday, many people braved a cold monsoon-ish rainy afternoon to warmly welcome Clinton and hear about her plan to increase opportunity for African-Americans.

Intentionality was a key underlying theme of her speech. It’s not enough to address economic inequality without also taking into account racial inequality, she said repeatedly in different ways.

“I want to talk with you about how we break down the barriers that disproportionately affect African-Americans and build ladders of opportunity in their place,” Clinton said at the outset of her speech, at the Schomburg Center for Research in Black Culture.

“We have to begin by facing up to the reality of systemic racism. These are not only problems of economic inequality, these are problems of racial inequality. We’ve got to say that loudly and clearly,” she added. “These inequities are wrong. They are also immoral. It would be the mission of my presidency to bring them to an end.”

Some of the barriers she cited were economic (racial disparities in wealth, access to capital for small business or homeownership), some were educational (re-segregation of schools, the school-to-prison pipeline), some were related to the justice system (mandatory minimums, racial disparities in arrest rates and deaths at the hands of law enforcement). Some combined all three at once.

“Up to 60 percent of prisoners who reenter society face long-term unemployment,” Clinton said. “My jobs plan makes investments in re-entry programs for the formerly incarcerated.”

Specifically, she has proposed $5 billion for reentry programs for formerly incarcerated people. It’s just one small part of Clinton’s $125 billion Breaking Every Barrier Agenda to revitalize the economy in “communities left behind.” Clinton used her appearance yesterday mostly to highlight proposals within it.

She referenced $20 billion to support creating millions of jobs for youth. Part of that would go toward a new competitive grant program that would provide funds from the federal government when local employers, community leaders, local colleges and top government officials put forward strategies and resources for youth employment, including apprenticeship programs.

“The unemployment rate for young African-Americans is twice as high as that for young white people,” Clinton said. “Let’s give tax credits to businesses that actually invest in training, in apprenticeship programs to help young people who don’t go to a two-year or four-year degree.”

She also referenced a $25 billion proposal to support entrepreneurship and small business growth in underserved communities.

“We need a real plan to expand access to capital to support black entrepreneurs especially black women who represent the fastest-growing segment of new businesses in America,” Clinton said.

Her proposal promises providing incubators, mentoring and training to 50,000 entrepreneurs and small business owners in underserved communities; expanding and making permanent the new markets tax credit program and promises to double funding to the Community Development Financial Institution (CDFI) Fund, which is already supporting a lot of the work she proposes to expand.

Clinton also highlighted proposals to support African-American homeownership, as a means of creating wealth for families whose median net worth is one-thirteenth that of white families. One proposed program would fund community initiatives to match up to $10,000 in savings for responsible homeowners who earn less than area median income to put toward a down payment on a first home.

Clinton’s proposals go beyond economic programs. Yesterday she alluded to a proposal to create a $50 billion “Infrastructure for Opportunity” fund, dedicated solely to creating economic opportunity in underserved communities.

“We need to make sure we’re not only creating good jobs, but connecting black communities to where the good jobs are. We’ve got to be strategic about our investments in transit and infrastructure,” she said.

While claiming successes on 1990s policies like the earned income tax credit, new markets tax credits and economic empowerment zones (like the one in Harlem) in her speech, Clinton also admitted to policy mistakes during her husband’s presidency. In recognizing the frustration, disappointment and anger that some of those policies caused, she referenced none specifically. But in other parts of her speech, she did draw a loud applause for proposing to dismantle the “school-to-prison pipeline” that some attribute to policies her husband supported.

If Clinton’s mind or positions on certain policies or issues have changed since the 1990s, she alluded to one reason why.

“White Americans need to do a better job of listening when African-Americans talk about the seen and unseen barriers you face every day,” she said toward the end of her speech.