6 Photos Show an Interstate’s Impact on an American City 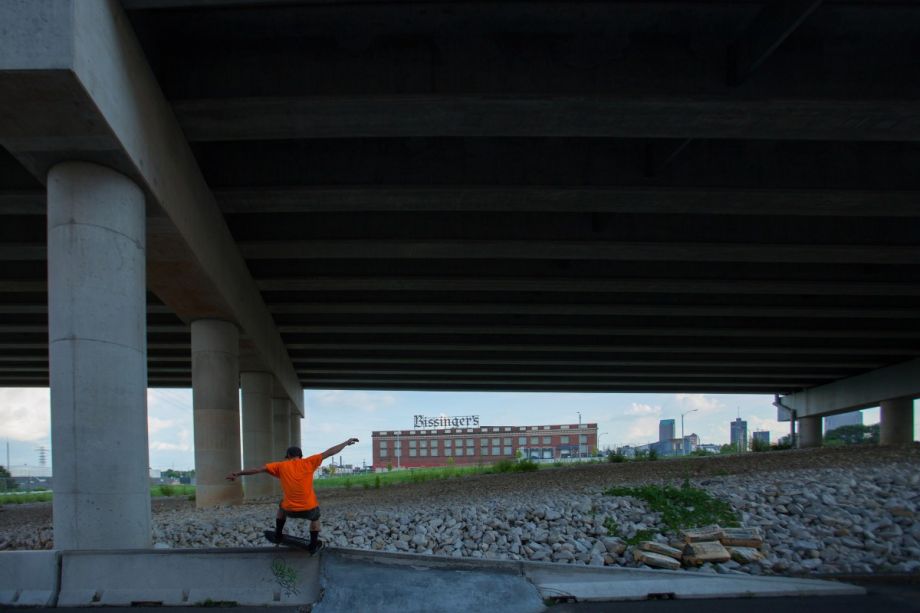 (All photos by Michael DeFilippo)

Michael DeFilippo and the U.S. interstate highway system have something in common: Both turn 60 this year. To commemorate that shared birthday, the St. Louis-based commercial photographer has been documenting the negative impact highways have had on his Missouri city’s neighborhoods. As Transportation Secretary Anthony Foxx pointed out in April, “We now know — overwhelmingly — that our urban freeways were routed through low-income neighborhoods. Instead of connecting us to each other, highway decision-makers separated us.”

On a map, St. Louis’ interstates and interchanges look like a spiderweb. Highways 55, 44, 64 and 70 converge and slice through nearly 40 of the city’s 79 neighborhoods, DeFilippo says. On the ground, the massive roadways have severed or destroyed neighborhoods, created dead zones below and beside themselves, and brought noise and pollution. “It was just crazy the way the roads just cut up the city,” says DeFilippo. “It’s also just visually ugly. It’s one of those things that you just kind of have to close it out, because if you look at it every day, it’s just depressing.”

But for this project, DeFilippo has been forcing himself to look. A visit to his son in Seville, Spain, made him see the destruction he could document in his own backyard. In the 2,200-year-old Spanish city, undivided by interstates, he saw a model for a city truly accessible by foot, bike and mass transit. “There’s a real downside to spending 50 miles a day inside your vehicle instead of walking 2 miles,” he says.

In addition to the blight his photographs capture, DeFilippo says he was motivated by the sprawl the interstates have facilitated. Between 1950 and 2000, St. Louis’ population grew by 48 percent while its land area grew over 260 percent. Nationwide, over 475,000 households were displaced to make way for highways that often serve those passing through better than they serve the people right next door.

The interstate highway system was initially conceived as a national defense tool. On its 60th anniversary, DeFilippo asks: “Have they weakened us as a country by contributing to sprawl and making us an oil-dependent culture?” As for his intentions, he says the project is personal, something he does because the topic interests him, but adds that “you never know how you can drive policy.”

I’ve selected six of his photos below; the rest can be seen on his website here.

“That was a church that had a neighborhood around it, and that neighborhood is gone. And the rest of it is parking lots,” says DeFilippo, who early in the project began by photographing landmarks. “We didn’t just lose neighborhoods. We lost parks, we lost businesses, we lost people. What you lose is, you lose density. You lose that critical mass that a city needs.”

“The strongest pictures have an element of serendipity in them, where something happens that you didn’t really expect,” says DeFilippo. Like the standstill traffic jam he discovered when he went to photograph the Compton Hill Water Tower.

“Any area that’s next to the interstate is least desirable property,” DeFilippo says, with a sardonic laugh. The interstate swipes past his own backyard, in the photo above.

“Sylvia Meriwether waits at a bus stop on Oakland Ave. in the Kings Oak neighborhood while traffic on I-64 whizzes by behind her. The green space was once the southern edge of Forest Park before the highway carved a two-mile swath through it,” DeFilippo writes.

Not all is lost for St. Louis. For decades, I-44 has cut off the city’s famous arch from the Old Courthouse — also a part of the Jefferson National Expansion Memorial and the place where the Dred Scott decision was made — and from the rest of the city. But next year, a highway cap is expected to open, reconnecting the monument, city and waterfront. “I see that as like a baby step to overcome this blight, this destruction of the urban landscape,” DeFilippo says.