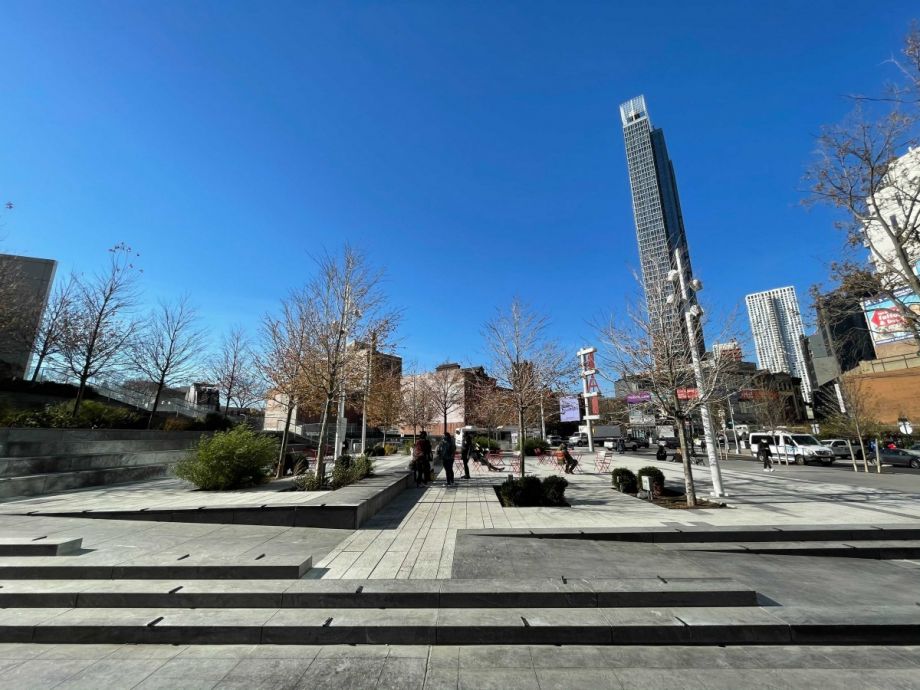 Grain Collective, a five-person landscape architecture firm in Brooklyn, designed this public plaza for the Brooklyn Academy of Music. Thanks to the Fed's Main Street Lending Program, Grain Collective may last to design many more spaces. (Photo by Oscar Perry Abello)

The loan terms could definitely be improved upon, but they’re good enough that Runit Chhaya is feeling much better than he was a few months ago.

“We work with public agencies, our work involves how to talk to people, especially [public housing] residents or a school in Brownsville,” Chhaya says. “Therefore having the right team members matters.”

In September, he got a loan from Brooklyn Cooperative Federal Credit Union for $250,000 — enough, he says, to cover at least nine months, maybe an entire year of salaries depending on how quickly the projects in his firm’s portfolio get moving again. He has five years to repay the loan, he won’t have to make any payments for a year, and then it’s interest-only payments for one year before principal-plus-interest payments start. The interest rate is a very low 3.25 percent. There was no collateral required.

Under normal circumstances, this tiny credit union with only $42 million in assets wouldn’t be able to make a loan like that. The risk of default on a loan of this size, given the pandemic, given the lack of collateral, would fall beyond the credit union’s risk tolerance. But in this case the credit union is only risking five percent of the loan amount, because the Federal Reserve supplied the other 95 percent in what’s called a loan participation. That’s how the Fed’s Main Street Lending Program works.

But the Main Street Lending Program rollout has been slow, to put it politely. Out of $600 billion in lending capacity available starting in July, as of October 31 only $4.1 billion in loans have gone out to just 438 businesses nationwide — including 136 businesses in Florida alone, by far the most of any state. Brooklyn Cooperative Federal Credit Union has done two of these loans so far, including the one to Grain Collective.

It’s been a stark contrast to the furious rollout of the Paycheck Protection Program. While it had its own serious challenges reaching some of the most vulnerable small business owners, and evidence is mounting it was rife with fraud, in four months that program saw more than $518 billion in loans go out to nearly five million businesses.

One obvious barrier has been the minimum loan size. When the Fed first announced the Main Street Lending Program, the minimum loan size was $1 million, far too much debt for many small businesses to take on, even with the favorable terms. On October 30, the Fed lowered the minimum for the third time, to now just $100,000. But that’s just the start of the program’s challenges. Outgoing Treasury Secretary Steve Mnuchin has said he doesn’t plan to extend the program past its current December 31 deadline, although the incoming Biden-Harris administration could decide to reopen it after taking office — and maybe even tweak it to be more accessible to small businesses.

“It allows us to do much larger loans, which is exciting,” says Daniel Gonzalez, chief lending officer at Brooklyn Cooperative Federal Credit Union. “But the structure is unlike any loan I’ve ever seen. It’s not at all how we would ever structure a loan voluntarily.”

Even with many kinks to work out, the fact that there is a Main Street Lending Program operating at all is part of a profound change in the nation’s banking system.

Under normal conditions, besides serving as the federal government’s bank and fiscal agent, the Fed is a bank’s bank. It holds deposits from private banks, and when it makes loans, it makes them primarily to other banks as part of ensuring a smoothly functioning banking system.

But under what’s known as Section 13(3) of the Federal Reserve Act, in “exigent circumstances” the Fed can temporarily make loans to other businesses and even individuals. Until the last financial crisis, it could do this unilaterally as the Board of Governors of the Federal Reserve System saw fit. The Dodd-Frank Act passed in 2010 requires the Fed to ask for prior approval from the Secretary of the Treasury to use its Section 13(3) powers.

As the COVID-19 economic shutdown gripped the country in March, the Fed started rolling out a series of Section 13(3) programs representing trillions of dollars in available credit for businesses of all sizes and even, for the first time ever, state and local governments and agencies. All of those programs are set to expire at the end of 2020.

The state and local government lending program has also had challenges rolling out, with only two borrowers so far — the state of Illinois and New York City’s Metropolitan Transportation Authority. But those two borrowers are the first state or local governments and agencies to ever get a direct loan from the Federal Reserve.

Some racial justice advocates are calling for the Fed to abolish the municipal debt market entirely, replacing it with zero-interest loans for state and local governments and agencies on a permanent, ongoing basis.

The Fed has made loans directly to non-bank businesses before, with and without participation through a local lender, under the banner of the Reconstruction Finance Corporation, active from 1934 to 1953. But the nation’s banking system was radically different in those times. Small banks dominated the market. State and federal policy changes since the 1980s have resulted in large banks dominating the banking system today.

The Paycheck Protection Program laid bare the reality that larger banks tend to focus more on larger clients, relegating millions of small businesses to second-class status. But there is evidence that loan participations, like those offered through the Fed’s Main Street Lending Program, can tip the scales toward smaller lenders.

“These are absolutely unusual times, so I’m sure that [at the Fed] they’re breaking up the old paradigms and saying we’ve got to think differently now,” said Eric Hardmeyer, president and CEO of the Bank of North Dakota, in an interview for an April 2020 story Next City co-published about the Main Street Lending Program.

Loan participations allow smaller lenders to respond to the needs of their clients that exceed their appetite for risk. This Fed program may be specific to the pandemic, and the loan terms need a lot of work, but now that the program is operating, the Fed has a process and documentation to create a permanent modern-day loan participation program for small businesses that is tailor-made to support community banks and small credit unions.

“Generally without Main Street our maximum loan size is $100,000, and above that we need a participation,” says Gonzalez.

It’s not uncommon for credit unions and private banks to participate in loans with each other. Gonzalez says his credit union usually does at least one a year. But it takes a lot of extra time. When he’s reached out to other credit unions and community banks about needing a loan participation, Gonzalez says it usually takes two weeks and at least one follow-up message just to get a reply from his peers, who are also under-staffed and swamped even under non-pandemic conditions. If the reply is positive, it might take several weeks after that for the participating lender to go through their own underwriting and approval process.

So far Gonzalez has found the Main Street Lending Program to take about two weeks from initial inquiry to decision.

“Main Street, for all its faults, is quite fast compared to participations with other credit unions,” says Gonzalez.

Chhaya also prefers the loan participation to getting a direct loan from the Small Business Administration, —he’d rather work with a trusted intermediary.

“It’s incredibly strange, a very odd structure,” Gonzalez says. “It seems explicitly designed for much larger corporations that can pay enormous lump sums of principal on a whim, which is simply not the case for small businesses.”

The Fed has already tweaked the details of the program, by lowering the minimum loan size from $1 million to $500,000 to $250,000 to finally, $100,000 at the end of October. If the incoming Biden-Harris administration extends the program, the Fed could make more changes. It could change what businesses are eligible for the loans — the Fed’s Section 13(3) powers can only be used to support businesses that were “financially healthy” before the emergency, but that definition could be tweaked, or it could change that “odd” loan structure.

Gonzalez would prefer the principal and interest payments spread out more evenly across the final three years of the loan. Or even better, give the credit union the freedom to work it out with clients whatever repayment structure works best for both sides. There’s no reason — other than the opinion of the Secretary of the Treasury and the Board of Governors of the Federal Reserve — for the loans to have this structure — or to have a minimum loan size.

With support from the Treasury Department, the Fed could even make the Main Street Lending Program ongoing, expanding access to capital for thousands upon thousands of businesses — while also bolstering the small banks and credit unions that are small business owners’ preferred source of credit, according to annual Federal Reserve small business surveys.

“The best thing was there was a bank involved, not the SBA directly,” Chhaya says. “They’ll follow their system of checks and balances versus me dealing with SBA. Here I knew Daniel [Gonzalez] and [CEO Samira Rajan] would be involved. They have trust in me, I trust them. They gave me my first line of credit for this business.”