How Village Healers Can Help Quell Urban Infections – Next City 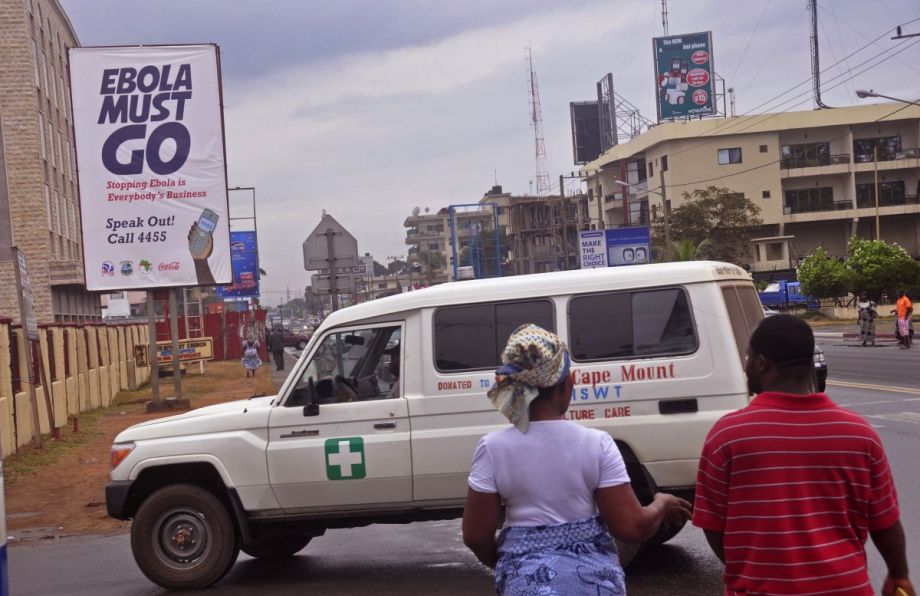 An “Ebola Most Go” billboard in the city of Monrovia, Liberia (AP Photo/ Abbas Dulleh)

It’s tough to be an informal worker in a crisis. Informal workers (the ones who are not monitored or taxed by governments) are well over half of all workers in West Africa. In the nations where Ebola hit hard, economic downturn was an inevitable part of the outbreak.

Government-imposed curfews and cordons sanitaires reduced the contact necessary for marketplaces, shops and transportation systems to function, pushing Guinea and Sierra Leone into economic contractions and depriving workers of income and jobs — most notably the informal, self-employed ones. A survey in Sierra Leone in November found that 64 percent of self-employed workers weren’t working. In Liberia, 60 percent of women and four of every 10 men working at the outbreak of the crisis are no longer employed, with informal workers most vulnerable.

But there is one category of informal workers whose lives have been altered by Ebola in a different way. Traditional healers — a category of informal workers who provide diverse forms of healthcare for injuries, illnesses and, as Sierra Leonean healer Fallah James puts it, “people who are said to have been cursed” — became a surprisingly essential part of managing the Ebola outbreak. After helping to dispel the fear and fatalism that fueled the epidemic, the question is whether they’ll retain their new role after the epidemic finally sputters out.

Traditional healing itself is, as the name implies, not new; the field is a part of the long-standing culture of sub-Saharan Africa. But the category also captures a diverse range of practices. London School of Tropical Medicine and Hygiene (LSTMH) researcher Fred Martineau says, “Many informal practitioners will use formal [biomedical] treatments as well,” incorporating techniques that can range from evangelical Christian doctrines to biomedical work meant to ameliorate doctor shortages. “It’s a first port of call for many people,” he says, including ones who have had “a bad experience of biomedical providers.”

Despite a conservative streak that emphasizes a rejection of the new and foreign, Ebola sparked an innovation in this field.

The current Ebola outbreak began in early 2014 in rural Guinea. As it spread across Sierra Leone and Liberia, panic followed close behind — fueled in part by the high mortality rate and by the belief that little or nothing could be done for victims. For a time, public mistrust hampered Ebola community health teams from reaching individuals in need of help.

In Guinea, incidents of violence, including the murder of eight community health workers, stopped outreach work cold at certain moments. More typically, however, anxiety resulted in mild but persistent resistance and misunderstanding of biomedicine. Martineau, a member of LSTMH’s Ebola Response Anthropology Platform, suggests after prospective biomedical patients “find out that there’s no treatment, as is the case with Ebola,” he says, “then people will interpret that by saying that obviously this isn’t a biomedical illness, this is something that is treated a slightly different way,” consistent with their spiritual or supernatural beliefs.

In that milieu, traditional healers were compelling bridges into communities in need of care. Building on previous efforts to connect traditional and biomedical healers, organizations like the International Federation of the Red Cross and Red Crescent initiated collaborations with informal healthcare workers in Guéckédou, Guinea; Kailahun and Kenema, Sierra Leone and urban Monrovia, Liberia. (Because the crisis jumped from rural to urban areas, healers clustered in villages helped quell urban infections.)

The international groups provided training to build the healers’ capacity to educate patients on Ebola, avoid unsafe care or burial practices, and improve community trust in biomedicine by harmonizing a traditional worldview with a scientific one. Rooted in tradition and close to the people they served, the healers brought life-saving calm to afflicted communities, improving engagement with life-saving Ebola wards.

It wasn’t the only effort formal organizations made, of course. The Ebola crisis prompted massive interventions from multiple international agencies, governments and nonprofits, including ones aimed at reorganizing or improving the national health system. In the midst of upheaval came great opportunities for building, in other words — which involved still greater upheaval.

In that context, informal healers stand out. In a time of panic, their innovation was to put the brakes on new ideas, revert to long-held traditions and allow a population whipsawed by crisis to experience a more familiar style of healthcare. In a time of great fear and uncertainty, this non-innovation innovation was particularly potent. By helping get ill people into hospitals and reduce disease spread, the effort also reinforced the most ancient medical concept of them all: First, do no harm.

Integrating traditional perspectives with biomedical care has been attempted for HIV in South Africa, mental health in Bangladesh and other illnesses worldwide — sometimes becoming stable efforts over time. Ebola, by virtue of its unpredictable periodic emergences, seems to have never formed such a connection. In the wake of this massive outbreak, could informal healthcare workers become entrenched as a standard part of the health system of Sierra Leone, Liberia and Guinea?

Martineau expresses doubt, and it’s not hard to see why. While West African health systems have increased during the Ebola onslaught, they now face a rocky transition from crisis mode to stable scale-up. This is a challenge in a place where the health system has been called “virtually nonexistent” and a vector of disease — and one that, for better or worse, will rely on the imported expertise of international organizations and foreign governments.

With few international actors versed in informal healthcare, integrating them successfully in a national scheme may prove a stiff challenge. Indeed, there may be little overtures toward that at all. While the U.S. has announced a multilateral Global Health Security Agenda designed to stem the worldwide threats of infectious diseases, nearly all the included measures focus on international organizations. It’s difficult to find any references to community engagement, much less the traditional African worldview.

But in a region where grave loss remains a reality for many and the number of Ebola cases has climbed once again, a blend of spirituality, familiarity and efficacy remains compelling. Traditional healers, true to their name, are unlikely to go anywhere.