In This Healthcare System, a Bus Can Double as a Pharmacy – Next City

In This Healthcare System, a Bus Can Double as a Pharmacy 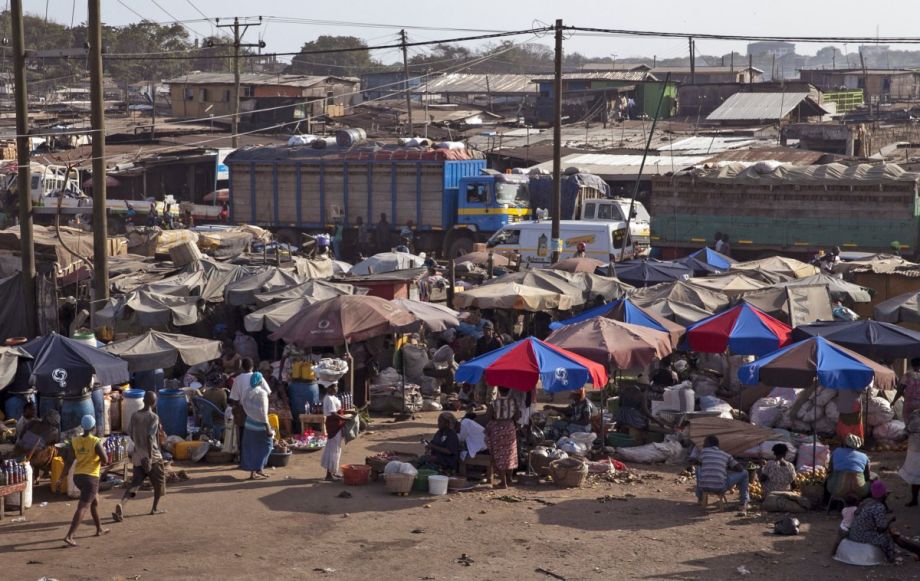 It was a hot December day in Accra, Ghana, and the tro-tro was already full when the last person stepped on. A tro-tro, the dominant form of transit in the West African nation, is a van that traverses a set route. Stationed in Ghana’s packed marketplaces, they move only once full of passengers. This one, loaded with 15 tightly packed bodies, was about to set off into the city of two million.

The street-seller found his way on just before the door closed. He was short enough to stand nearly upright in the low-ceilinged vehicle. As the driver started the engine, he turned toward his captive audience and began a rapid-fire spiel in English and the local language Twi, holding aloft a small packet of albendazole, a medicine used to treat intestinal parasites. As the van sped down the road, he ran through the medicine’s benefits, pausing only briefly to pluck small bills from a few extended hands. By the time the tro-tro reached its next stop, the seller had made change, distributed the deworming tablets, and praised Jesus aloud. He nodded to the driver and debarked, ready to repeat it all on someone else’s commute.

That is System D.

System D — the D stands for débrouillardise, a French word meaning “to get by” — is another term for the “informal economy,” a term coined in Accra in the mid-1960s by British anthropologist Keith Hart. The terms represent the portion of the world’s transactions made without government monitoring or taxation.

In the United States, the informal economy accounts for just 8.8 percent of all transactions. (In the U.S., where government oversees, licenses and monitors perhaps more than any other country in the world, the sector is often illegal due to the very fact of its informality.)

In a place like Accra, the informal system looks far different. The sector makes up 38 percent of Ghana’s total economy (a percentage that rises sharply when agriculture is counted in). Streets vendors are so common that one can live there almost indefinitely without entering a store — buying instead from hawkers who offer everything from bananas to plumbing parts to pharmaceuticals. Other developing nations’ informal sectors often account for an even bigger percentage of their national economies.

Despite that ubiquity, it’s hard to precisely describe informal economies. By definition, the jobs are unmonitored. They can also be unstable, unrecognized as “real work” even by those who do them, or associated with outlaw status (as with drugs).

In Accra, Ghana, one can live almost indefinitely without entering a store. The large informal economy means you can also buy medicine on a commuter tro-tro, pictured above. (Photo by Eigene Fotografie)

But the main reason the informal sector escapes description may be the blurred lines between it and the formal economy. Informal workers often provide formally manufactured products (like cigarettes, or in the case of the deworming tablet-seller, pharmaceuticals) in spaces partially controlled by governments (like tro-tros, which are nationally registered, or streets patrolled by cops). “Everyone is in the formal economy and the informal economy,” Hart points out.

Health issues in informal sectors are especially neglected. Rachel Glennerster, an MIT economist researching Ebola’s effects on informal workers in West Africa, points out that “people advocate for their own sector, and there isn’t anyone advocating for the informal sector. You can distract attention from where the worst problems are.”

In a year when the agenda for global health and development is being rewritten, informal workers’ health is ripe for investigation. While unregulated transactions can be found all along the socioeconomic ladder, workers closest to the bottom rungs of the global economy — in Cote d’Ivoire’s cacao farms, for example, or in Mumbai’s notorious Dharavi slum — are most likely to have no choice but informality. Hart describes a world of “women with babies on their backs selling oranges, being controlled by gangsters.”

Informal workers don’t have employment-based health insurance plans, and the relationship between informality and health is complex. “The informal sector does not observe formal health and safety regulations,” Hart says. Investigative journalist Robert Neuwirth describes “so much demonization” of these workers, a stigma that can impede well-being.

Yet informality is not only a health drawback. As Neuwirth writes in Stealth of Nations, “System D emerges whenever people who have been passed over by the dominant economy start to act.” Informal jobs can allow people otherwise shut out of capitalist development a way to secure basic wages, reducing inequality and helping ensure nutrition, healthcare access and a measure of dignity.

System D offers healthcare innovations too. Informal health workers range from the hawkers of surgical equipment clustered outside Indian hospitals to the traditional birth attendants of sub-Saharan Africa. Many fill in gaps in formal healthcare systems, selling otherwise inaccessible products or providing care where doctors are short-handed. Driven by necessity to find accessible means of staying well, the informal sector also blooms with healthcare solutions and strategies for resilience.

The story is rich, and it’s mostly untold. For the next year, I’ll be writing stories from African, Asian, and Latin American cities on how the workers no one recognizes are thriving. I’ll trace a path around the planet, talking to healthcare corporations, labor activists, and the average woman selling oranges in places like Khayelitsha, Capetown, South Africa; Kibera, Nairobi, Kenya; the slums of Karachi, Kolkata, and Kathmandu; and Manila, Philippines. I’ll make my way to Accra, Ghana, to a neighborhood called Nima, where study of the informal economy was born.

I know I’ll find change — Hart told me last week that Nima, where he once lived side-by-side with petty criminals, is now mostly a sleek four-lane highway — along with challenges, innovations and strong communities.

If I end up needing any deworming tablets, I’m sure I’ll be able to find those, too.