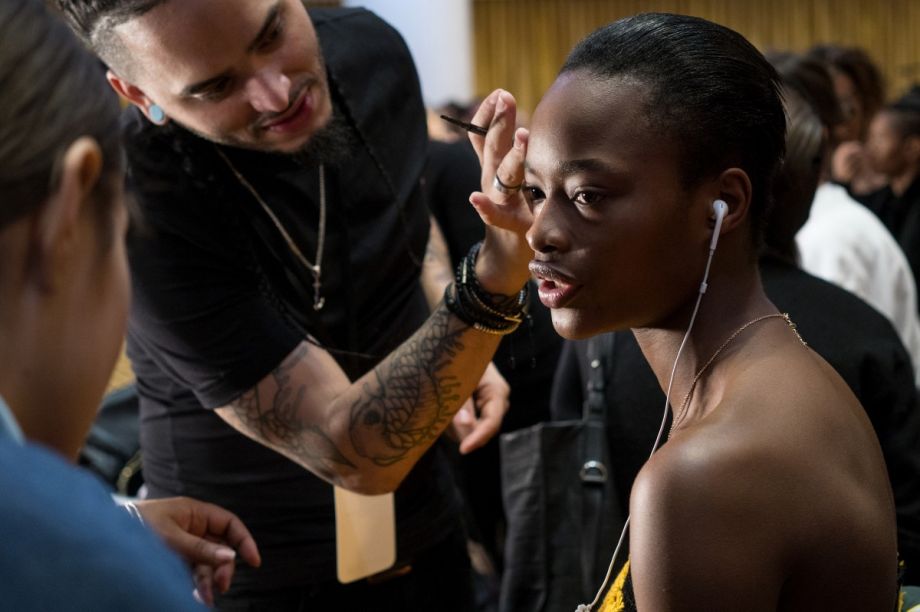 Backstage at New York City Fashion Week 2018. Makeup artists were among those who filed complaints under the Freelance Isn't Free Act, the first law of its kind in the United States, giving protections to freelance workers against late payment or nonpayment. (Credit: AP Photo/Craig Ruttle)

It’s been a year since the Freelance Isn’t Free Act went into effect in New York City. A new report from the Department of Consumer Affairs, the agency charged with enforcing the new law, shows the law’s early impact.

Thanks to the Freelance Isn’t Free Act, freelancers in New York City recovered $254,866 in payments over the past year, with an average recovery of $2,039 per complaint. Sixty-one percent of the time, freelancers recovered payment within 90 days of complaining.

The first law of its kind in the country, the Freelance Isn’t Free Act gives added layers of protection to New York City’s estimated 400,000 freelancers. It requires contracts for services worth at least $800 and payment within 30 days of service unless otherwise specified in the contract. Under the new law, the Office of Labor Policy and Standards within the Department of Consumer Affairs is a freelancer’s ally in city government, available for consultation, conflict resolution and preparation in bringing cases to civil claims court.

“We saw a problem, the law is a solution and we think it’s working,” says Consumer Affairs Commissioner Lorelei Salas. But, she added, “the numbers are still low and we want to see them go up if the need is there, and we think it is.”

“There’s a real epidemic of nonpayment in the freelance community. Smaller [nonpayment or late payment] claims are routinely happening and are adding up and really impacting people’s income,” says Caitlin Pearce, executive director of the Freelancers Union, which campaigned for the bill, working with NYC Council Member Brad Landers. “The results show that this law has been a tremendous success, and when freelance workers have protections, they’re doing better.”

The law was designed to incentivize employers to settle disputes quickly and out of court, while also encouraging freelancers to seek legal help. For example, the law prohibits an employer from retaliating when freelancers exercise their rights under the Freelance Isn’t Free Act. The law also mandates that the employer must pay double the amount of payment owed plus damages and lawyers’ fees if a freelancer brings a suit to civil claims court and wins.

According to the report, 21 percent of payment violation complaints resulted in payments after an initial consultation with the Office of Labor Policy and Standards; while 77 percent of complaints resulted in payment after the office sent an official notice of the complaint to the party accused of a violation. Of the five suits filed in civil court by freelancers, in three cases the freelancer and accused party reached settlement before the first court date. In the other two cases, the freelancers received judgments in their favor and were currently awaiting payment at the time of the report’s release.

The law still faces challenges, especially when it comes to who so far has been able to access the rights it recognizes. The Office of Labor Policy and Standards estimates 150,000 freelancers in New York City experience late payment or nonpayment every year.

“If the person has an important job, it’s easy to find a lawyer to sue your employers,” says Favio Ramirez-Caminatti, the executive director of El Centro del Inmigrante and El Centro’s Community Job Center on Staten Island. But that’s not possible for the day laborers and domestic workers, he says, who make $120 to $180 per day on the days when they have jobs.

Freelancers who contacted the Department of Consumer Affairs regarding the Freelance Isn’t Free Act didn’t necessarily reflect the diversity of freelancers in New York City, demographically or in terms of industry. They tended to be white, English-speaking, and highly educated. They made $17,500 more per year than the average New York freelancer, and 46 percent who filed complaints were between the ages of 18 and 29, an age group representing only nine percent of the city’s freelance population as a whole.

Seventy-two percent of those who filed complaints worked in the arts and entertainment industries, including hair and make up artists, camera operators and video editors. The agency also saw complaints from IT specialists, computer programmers, journalists and photographers.

“I think there’s still some people not aware of this and they can benefit in using it,” Ramirez-Caminatti says. “It’s a process to educate people about the law and explain why it’s better for the people working freelance and also for the [employers]. It’s clear what their responsibility is.”

To that end, the Department of Consumer Affairs and its partner organizations plan to launch public awareness campaigns and on-the-ground outreach to target freelancers under-represented in the report, including both documented and undocumented immigrants, who can be hesitant to reach out to government agencies. The outreach efforts will focus, too, on employer education, ensuring they understand the legal risks they’re exposed to if they do not comply with the law.

“There’s always pushback every time there’s a new law that imposes additional requirements on employers,” Salas says. “We try really hard to provide employers with the tools they need to comply with law.” For instance, the agency provides templates for contracts.

Overall, the city’s goal is to use the Freelance Isn’t Free Act to elevate standards across industries, eliminating the norm of businesses routinely paying freelancers late or not at all. Looking ahead, advocates are hopeful that New York City will serve as a model for how legislation can protect freelancers in other cities, where chapters of the Freelancers Union are organizing to pass similar laws.

“We want to send a message that we are actively enforcing these laws, not just responding to complaints, but being proactive,” Salas says. “We want to create a culture of compliance.”