In Flint, Block Clubs Make a Difference Worth Millions – Next City

In Flint, Block Clubs Make a Difference Worth Millions 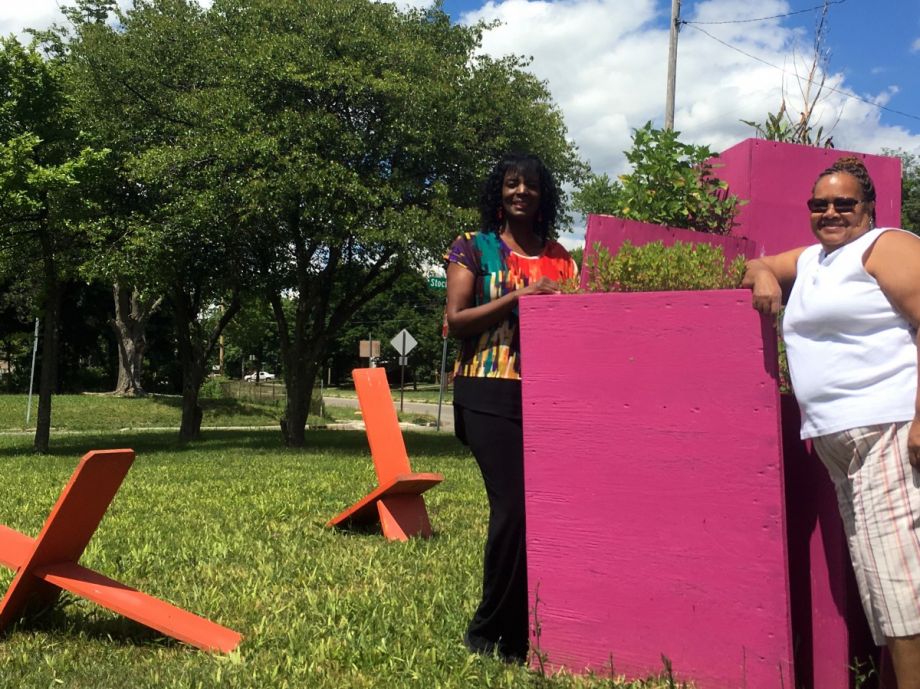 Lorrie Knighten, left, and Marijoyce Campbell stand in a park between the two neighborhoods their block clubs look after. The two worked with a local arts organization to install seats and planter boxes in the park. (Photo by Scott Atkinson)

Lorrie Knighten met Marijoyce Campbell for the first time at the New Community Baptist Church in Flint, Michigan, on Mackin Road. The street marks the boundary of the Ballenger Square Community Association, which Campbell organized and has run since 2012. Knighten knew what Campbell had been up to because she’d seen the results of the community cleanups, the lawns of vacant properties finally being mowed. And she saw where it stopped, right there at Mackin Road.

Knighten showed up at a block club meeting in the church and introduced herself. “I said, ‘Oh, you would be perfect to start one right next door to our boundaries,’” Campbell recalls.

Knighten didn’t know what to do, but Campbell told her not to worry. She hadn’t either when she started. All she knew was that one day she returned home from a workout at the YWCA downtown to find a smashed front window, a brick on the floor and two TVs missing. Afterward she stood in her yard, “dumbfounded,” she says, remembering what the man who’d installed the window had assured her: It would take someone throwing a brick to get into her home. So it had.

Crime wasn’t unusual on Campbell’s block. Her neighbors on either side and across the street had all been broken into, but it was still shocking for it to happen to her. More shocking, though, was when a man from down the street returned with her television. “That’s when I realized that people cared, and that people will get involved. That was just amazing to me,” she says.

Campbell started the block club by passing out fliers just to the people on her street. She wanted to talk about what to do about the blight and crime. About 13 people came over — not bad for a neighborhood where many of the homes sit unoccupied. A few months later, after more fliers and finding a home for meetings at the church, about 45 people showed, wanting to know what they could do.

It’s a familiar story in Flint, a city strapped for cash and struggling with park maintenance and vacant properties. But where the city’s capacity falters, residents, in the form of community groups large and small, are picking up the slack. Block clubs are vital in that mix, bringing focused determination and advocacy to the neighborhood level, street by street.

“In a sense they ensure that basic municipal services are provided that cities like Flint don’t have the manpower for,” says Kevin Schronce, Flint city planner. “It’s interesting because you go to other cities, even in Michigan, and there’s an expectation as it relates to city government. I think in Flint it’s basically the MO that, we can’t rely on them … they know they have to rely on other things.”

Block clubs aren’t a new concept of course. Amanda I. Seligman, chair of the history department at the University of Wisconsin-Milwaukee and author of “Block by Block” and “Chicago’s Block Clubs,” says that in areas where certain services are lacking, residents tend to organize to take action.

“This kind of organization is very complementary to local governments … that don’t have the overall tax base to provide [services],” Seligman says. “In other cases [like Chicago] the city is just too big, so if you’re the resident of a certain block you may not be able to get the government to notice it. So people might organize with their neighbors to make that change.”

In Flint, a strong network of partnerships between local groups and nonprofits, as well as the city and larger organizations, like the Genesee County Land Bank, has developed.

In 2012, community groups worked directly with the city to inventory every residential parcel in the city — an impromptu program that continues. There’s a group on Flint’s north side that’s working with the city, the land bank, and others to start a food co-op. Fifty-nine of Flint’s 70 public parks have been adopted and are fully maintained by community groups.

“I think it’s important to realize the reality is local government does not have the resources, does not have the funding, to deliver services fully. And so because of that residents often pick up that slack, everything from maintaining vacant property on their block to maintaining parks organizing crime watches,” says Natalie Pruett, an independent planning consultant in Flint who spearheaded the neighborhood inventory project.

For five years Pruett also managed the Clean and Green program at the Genesee County Land Bank, an organization that acquires and maintains vacant properties in Flint and the surrounding county. Pruett says that while similar programs exist throughout the U.S., she believes the one in Flint has at least one unique characteristic that is common across its neighborhoods.

“I will say what I think is different about Clean and Green is it defers decision making to community-based groups. The land bank minimizes their role in maintenance plans and maximizes the role of the community groups,” she says.

Sitting next to each other in a neighborhood Tim Hortons earlier this year, Campbell and Knighten laugh like sisters. Flint may have a strong network of nonprofits and philanthropic organizations, but when Knighten talks about her group, the New Community Block Club, she talks about Campbell and her mentorship.

“She is really a hard-working lady,” Campbell says, laughing with Knighten while they lean into each other. “She surpasses me.”

“We work together,” Knighten says, “and that’s what it’s all about.”

For all their efforts, and the hundreds of other volunteers throughout the city, Flint still has a dwindling population and tax base. Blight and crime are still a major problem. If nothing else, Campbell says, she’d like to see the city better enforce its existing codes and laws. For all her group does for its 32 blocks, it doesn’t have the power to hold people accountable for dumping trash on a vacant property or not mowing lawns. Campbell started her club in an effort to curb crime, but in the past year she’s had cars and houses on her street shot up by drive-by shootings. One woman she knows was shot in the face, she says, when a carload of men opened fire on her home.

Not everyone who lives in the city can afford to leave that behind, but Campbell can. Every year she spends a few weeks with relatives in Houston. This last year, she couldn’t help herself. She stayed eight months before she came back. She could stay in Houston permanently. Her family all but begs her to, in fact. She’s got a job waiting there if she wants it. But she comes back to Flint.

“I’ve been here 23 years, so I know what it used to be like,” Campbell says. And while she’s seen so many leave, she also knows who, like her, is left. “Everybody has this love in their hearts,” she says. “There’s a lot of love here. I see it.”

This article is one in a series on resident-led revitalization efforts in Flint, Michigan. Reporting is underwritten by the Center for Community Progress, through a grant from the Community Foundation of Greater Flint. Click here for more.