When It Comes to Keeping Up Flint’s Parks, It Takes an Army – Next City

When It Comes to Keeping Up Flint’s Parks, It Takes an Army 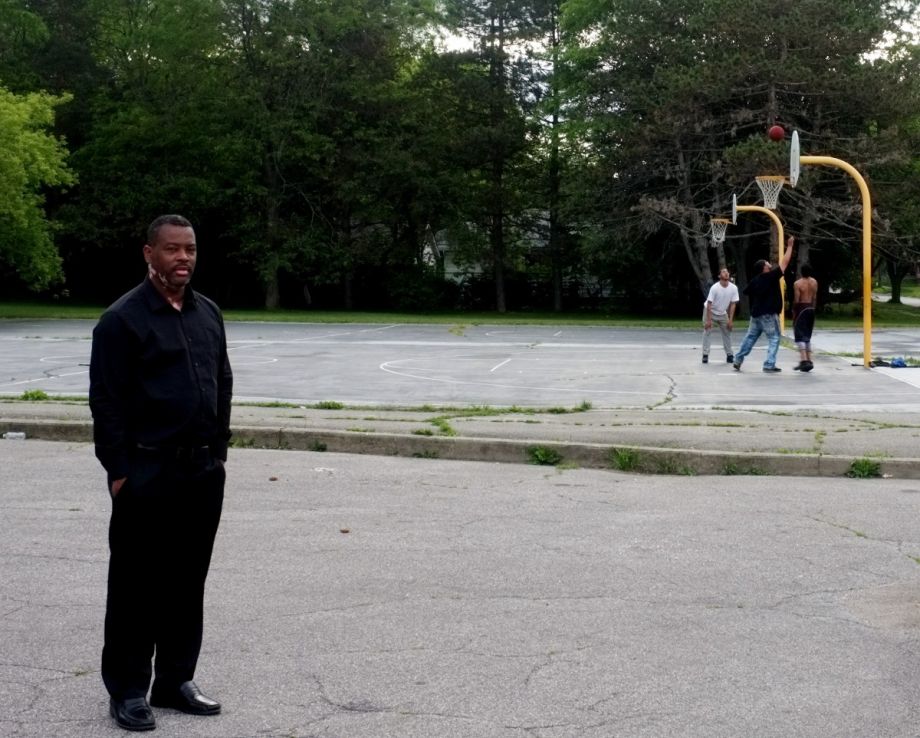 Quincy Murphy stands near the basketball courts at Dewey Park in Flint, Michigan. Now a community gathering place, the park was once “infested” with drugs, Murphy says. (Photo by Scott Atkinson)

“What’s up, Q?” a man says, dribbling a basketball at Dewey Park while Quincy Murphy, a local who looks after the space, gets out of his pickup. The first time Murphy met the tall, lanky man, who’s maybe in his mid-30s, the man was selling drugs.

Murphy didn’t call the cops, and didn’t avoid the man or any of his friends. Dewey Park, located on the north side of Flint, Michigan, was “drug infested,” Murphy says, “they sold drugs, they gambled, there was high crime, parents didn’t want their kids going up to the park.” Murphy didn’t even tell the dealers to get out.

That didn’t mean the people who’d sold drugs would just disappear — and Murphy didn’t think they should. Instead, he asked them what they wanted their park to look like. And then he put them to work.

This was just before Flint adopted its updated master plan in 2013. The city had been holding community meetings seeking input on how residents wanted their city to grow and change, and Murphy thought these guys at the park might have some ideas too.

“We wanted to incorporate them in the planning process. We wanted to give them a sense of belonging. So we went up to them and said, ‘What do you think about this?’ And, ‘Go pick this up, go clean that up.’ At first they used to think, ‘OK, I’m selling drugs, but I’m going to pick up this rake and act like I’m cleaning up. If the police come, they’ll think I’m cleaning up.’ But eventually, they were actually really cleaning up, having a sense of pride, a sense of belonging, and it allowed them to have input in their park. Even though those guys did wrong, this is our park.”

Dewey Park isn’t large. It takes up the center of a big city block that has houses on one side and a converted, closed-down elementary school on the other. There’s a playground and basketball courts. What once was a tennis court, now has weeds growing up through cracks; much of its chain-link fence is missing. Curved paths wind beneath old oaks. It’s one of 70 parks throughout Flint. There’s also 57 mini, neighborhood, and community parks in the city, five large urban parks, and four historic golf courses, as well as special use parks and trails. The park system was created in 1920 with the idea that every resident in the city should be within walking distance to a park. Combined, Flint has 1,881 acres of parks.

The parks are still there, but the funding that fueled them at the start is all but gone. The 2008 parks budget in Flint was about $780,000, a number that fell to about $323,000 in 2014. That year, the city dissolved the parks department, liquidated its assets, and merged it with the planning and zoning department. In 2003, the department had the equivalent of nearly 100 full-time employees. Now, there’s less than one.

“Pick your favorite half of me, and that’s our parks department,” says Adam Moore, associate planner for Flint.

The budget for city parks has continued to shrink, and about 80 percent goes toward mowing and utilities.

The rest is up to community partners. And there are a lot of partners. Genesee County Parks and Recreation is responsible for 11 of Flint’s parks, but that still leaves a lot to look after, and that falls to the “army” of volunteers, as Moore puts it.

Including the partnership with the county, 59 of the 70 parks have formal partnerships with community groups, nonprofits, block clubs, churches, and other individuals or organizations through the Adopt a Park Program through Keep Genesee County Beautiful. The latter is an effort by Genesee County Parks and the city of Flint. Participants are expected to pick up trash and litter at least once a week, hold an annual spring cleanup, and find volunteers who are able to help keep up with the work.

Lots of groups do more. For a city like Flint, it’s not so much an extra asset as a needed one. The dollars simply aren’t there. When Moore receives a complaint about a downed tree limb or an overflowing trash can, he doesn’t make an in-office call. He calls a community partner.

But the park is key, the center of a community, a symbol that neighbors want a gathering place. In addition to the park upkeep, Murphy has installed a new pavilion, started a movie night in and kept the playground equipment safe. He has plans to resurface the basketball courts and for other beautification projects.

Moore says Murphy goes “above and beyond,” but doesn’t sound very surprised when he says it. In 2016, despite the economic woes that affect most of the city, more than three-quarters of Flint voters supported a tax that would secure the city’s limited funding for parks.

Grant money has paid for four new community playgrounds to be built in Flint parks, and despite inclement weather — extremely hot or extremely wet — Moore saw more than 100 volunteers come to help construct the equipment. During the master planning process, Moore says he heard the things you’d expect residents to be concerned about in Flint: blight, crime and education, “but right up there in that top five, you always heard from residents, parks.”

There’s still a lot to be done, but so far in Flint there seems to be no shortage of people stepping up to do it.

Murphy is an official partner with the city, one of many, but he’s got his own army, on and off the books, and that’s what keeps him optimistic.

“So volunteer to me means a whole lot of people coming from different directions, giving their gifts in whatever capacity they can give,” he says.

This article is one in a series on resident-led revitalization efforts in Flint, Michigan. The series is being reported with underwriting from the Center for Community Progress, through a grant from the Community Foundation of Greater Flint. Click here for more.