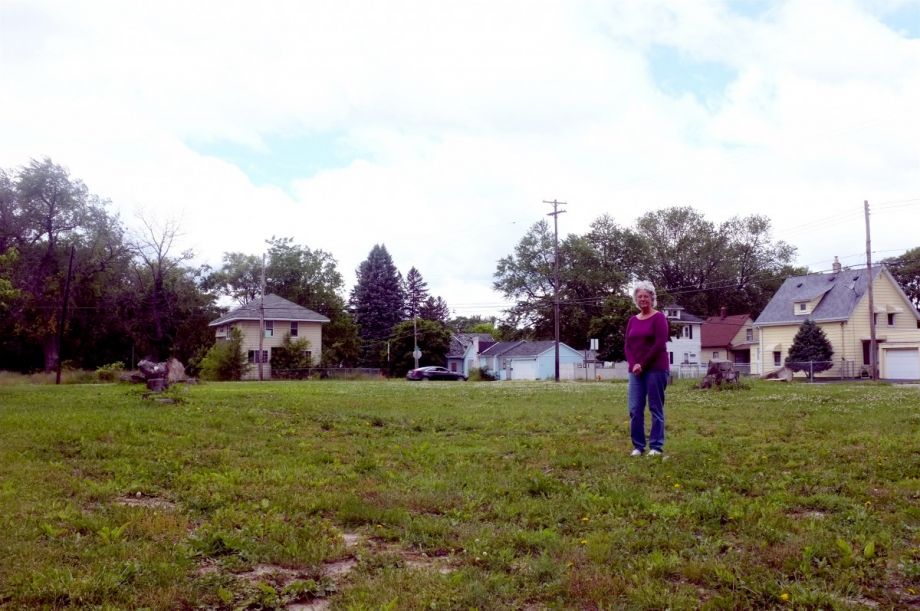 Edna Sabucco, pictured, and the Eastside Franklin Park Neighborhood Association will soon plant fruit trees and vegetables in several vacant lots, above, in their Flint neighborhood. (Photo by Scott Atkinson)

When Edna Sabucco was a teenager, her family moved to Flint, Michigan’s Eastside neighborhood. Now 60, she has never lived more than a block from the house where she grew up. She knows all her neighbors and greets her mail carrier by his first name. She acts the way you would want your neighbor to — friendly, conscientious.

The neighborhood has changed drastically since Sabucco arrived. Houses sit empty and falling apart; arson has been a problem, as well as crime. Businesses have closed down all along nearby Davison Road, the main Eastside corridor. Flint schools were once the envy of the U.S., but just a short walk from Sabucco’s house is a large open space where a three-story elementary school had stood for almost 100 years, until 2010, when it was burned by arsonists. Before it was set alight, it sat vacant for seven years.

According to U.S. Census data, Flint has a 41.2 percent poverty rate, almost triple Michigan’s 15.8 percent, and the Eastside is one of the areas in the city where that financial disparity is most apparent. A map from the Genesee County Land Bank, which acquires and maintains vacant properties in Flint and surrounding Genesee County, shows that there are few blocks in Sabucco’s neighborhood that don’t have at least one Land Bank-owned property. Some blocks are more than half owned by the Land Bank.

In 2014, Sabucco was part of a neighborhood group where, she says, she only heard talking. It has since disbanded but, “I told them, if you’re going to do something, for Pete’s sake, do it,” she recalls. “Don’t talk about it. Roll up your sleeves and get moving. The neighborhood is going to hell in a handbasket.”

In October 2015, she started the Eastside Franklin Park Neighborhood Association. The group is small, and Sabucco refers to herself as president only with air quotes. She says there are other officers in the group, “if you want to call them that.” The official titles are only a necessary part of the strategy, something that must exist on paper to do the work that needs to be done. But that paperwork isn’t what it might be if the association were a nonprofit. The group has instead pursued a “Doing Business As,” or DBA, status. Though that could make it tough to raise money, it hasn’t stopped them from getting helpful grants, thanks to their tenacity and a flexible program run by the Community Foundation of Greater Flint.

And the community work is getting done, bit by bit. A neighborhood cleanup tackled 17 vacant lots. A local pizza parlor gave them a break on pizza; they rented a port-a-potty and two dumpsters, and coordinated their efforts with a local church to hold their cleanup on the same weekend the church was holding theirs.

After proving they could make a difference, the group became more organized. They secured a mini grant of $1,000 from the Community Foundation and partnered with other Flint groups and nonprofits. That $1,000 came through the foundation’s program that targets small groups like Eastside Franklin Park Neighborhood Association that don’t have nonprofit status.

Not having a “501(c)3 nonprofit” designation can make it tough when applying to foundations, but Lynn Williams, community engagement officer for the Community Foundation of Greater Flint, says that not all groups need to go the nonprofit route, which includes a lot of red tape. DBA gives Eastside Franklin Park Neighborhood Association an official status — and a bank account. The latter is necessary because foundations won’t write checks to individuals, only organizations.

The Community Foundation monitors the small groups that are grantees and, over time, it’s possible for them to apply for larger grants.

This year, Sabucco’s group got to that next level. Their latest grant was for $5,000.

“Rarely do groups go from the first-year grant directly,” Williams says. “Usually they work at that first level for a while. But they went right away, they moved quickly and formed significant partnerships all over, not just the Eastside.”

Community partnerships are central to the project the association is using the $5,000 grant for: a neighborhood green space with a garden.

“It will be a shady area. There will be a few benches, a picnic table,” Sabucco says. “A place for people to come and read a book and enjoy the space. It will be an open space … and plus, it will produce fruit.”

Horticulture experts from Flint’s historic Applewood Estate are advising the association on what to grow. For example, they’re now planning to plant semi-dwarf fruit trees instead of the more shrub-like dwarf fruit trees they’d originally chosen.

Edible Flint, which helps residents learn to grow their own food, is also helping with gardening plans. Flint’s Neighborhood Engagement Hub is the fiscal sponsor, a partnership that allowed them to secure grants of $5,000 or more.

Williams emphasizes the importance for smaller groups to find nonprofit partners that can help secure further funding. Other local nonprofits can serve as fiscal sponsors that can write and receive grants they can then disseminate to smaller groups like Eastside Park.

The green space will be on the site of eight vacant lots directly across the street from Sabucco’s house. She’s been leasing them from the Genesee County Land Bank on her own since before she started the neighborhood association. She was afraid of what would become of them if she didn’t take control.

The Land Bank owns about 13,000 parcels “in various states and stages,” says Michele Wildman, the Land Bank’s executive director, and 766 of those are being cared for by 385 individuals, groups and organizations around the city.

The Land Bank helps to connect residents’ goals and the city’s master plan, which was updated in 2013.

“Some places are considered green innovation zones, so we want to make sure that the plans residents have fit within the master plan,” Renee Harvey, land access coordinator for the Land Bank, says. “Edna is in a green neighborhood.”

Sabucco hopes the new park will inspire others in the neighborhood to get involved, which would increase their capacity for projects.

“I think it will be a source of cohesion in many ways, in that many more people will see that we’re not just blowing smoke, we’re actually doing something,” she says. “We’ve had more and more people express interest.”

The gardens will need to be maintained, and Sabucco has already identified other lots that “need love.”

She’s optimistic — and realistic. Much of Flint’s woes are due to General Motors pulling out of the city, and she knows that those days aren’t coming back. But there are still things that can be done, she says. The city can find its way, if not “back,” then to whatever is next, even if that takes longer than she has.

At 60, Sabucco knows she will not live to see the completion of what she’s started. But she plans to continue.

She points at one wall in her home toward the house of a neighbor, whose children, grandchildren and now great-grandchildren she’s watched grow up. She points in another direction, toward another neighbor who just turned 95 and has lived in the house since her father bought it when she was 4 years old.

This article is one in a series on resident-led revitalization efforts in Flint, Michigan. The series is being reported with underwriting from the Center for Community Progress, through a grant from the Community Foundation of Greater Flint. Click here for more.