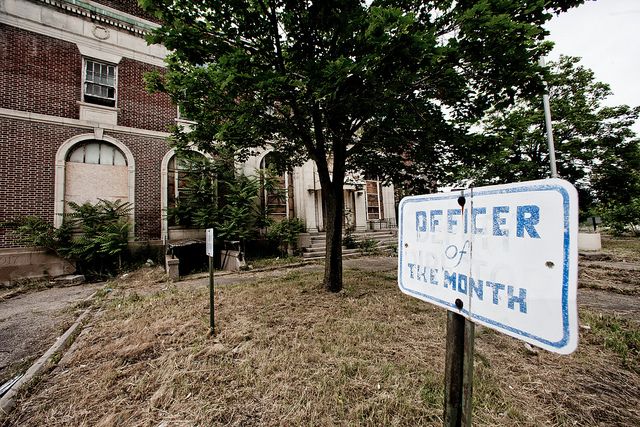 Former police department headquarters in Highland Park, Mich., a city adjacent to Detroit that was put under emergency management in 2000. Credit: Thomas Hawk on Flickr

As observers and urban economists both professional and armchair try to parse out what brought Detroit to become the largest U.S. municipality to ever file for bankruptcy, one major issue that pops up again and again is that of pensions for city workers. Detroit’s two largest unsecured creditors, after all, are its general pension fund and police and fire pension funds, both of which sued state-appointed emergency manager Kevyn Orr and Michigan Gov. Rick Snyder over the decision to file for Chapter 9.

One judge in Ingham County, which includes the state capital of Lansing, has even ordered Snyder to withdraw the bankruptcy petition over concerns about cuts to pensions, although Snyder faces no legal consequences should he fail to do so. The judge has said she expects the state to appeal her order.

The Motor City is hardly the only place to have found itself in a dire pension situation. Since 2007, a growing number of cities have struggled to find the money to pay their obligations to city employees and retirees. As the costs of benefits increase each year, some of the nation’s largest cities have seen pensions become their most pressing dilemma.

“A lot of cities do have this issue of legacy debt,” said Tracy Gordon, a Brookings Institution fellow in the economic studies program and an expert on local finances. “It’s basically a consequence of having once been a big city with a big workforce, and now being a smaller city with a smaller workforce and not sufficiently pre-funding your pension obligations.”

“There still are several cities and states that are in trouble with their pensions” Gordon continued, “so it might be helpful [in Detroit] to have a judge weigh in about what are the obligations that a city or state has to it its pensioners, as opposed to its taxpayers and bondholders.”

The Pew Charitable Trusts has a handy chart for determining which cities had a rough time of it, pension-wise, between the recession years of 2007 and 2010. According to Pew’s numbers, Detroit was meeting its pension liabilities until 2009, when it let $553 million worth slip by unfunded. Things got worse from there.

Other cities have fared even worse on the pension front. Below, we have a primer on the five largest U.S. cities at the bottom of Pew’s list:

Even when the Great Recession began, Chicago had been in a tight spot with regards to pensions. In 2007 it only funded 61 percent of its pension liabilities, which translated to nearly $9 billion. And things have only worsened with each passing year — in 2008 the amount the city owed topped $10 billion, and climbed to more than $14 billion by 2010.

Researchers at the Pew Charitable Trusts had predicted Philadelphia’s pension woes back in 2008, and their words of warning came just in time. That year and the year prior, the city hadn’t exactly done great job at funding pensions, but it at least had kept its debt consistent, leaving about $4.8 billion worth unfunded each year. In 2009, though, that number shot up to nearly $7 billion.

The weirdest city in the Pacific Northwest also started from behind, with about $1.6 billion in unfunded liabilities at the beginning of the economic downturn. Those only increased, naturally, and by 2009 Portland had fallen behind on some $2.7 billion in unfunded pension money.

Omaha’s unfunded pension liability nearly doubled in four years, growing from $426 million in 2007 to $823 million in 2010. During that time the city went from meeting about 60 percent of its recommended pension contributions to 44 percent.

New Orleans had left about $270 million worth of pensions unfunded back in 2007 — and this after the city had fired nearly half its workforce two years prior. In 2008, that amount creeped up by nearly $100 million. By 2009, it skyrocketed to about $770 million, and reached $855 million it 2010. Meanwhile, the amount of money the city set aside for pensions dropped from 76 percent of its total liabilities in 2007 to only 56 percent in 2010.

Bill Bradley and Ariella Cohen contributed reporting to this story.