Young Farmers Of Color Can Help the U.S. Meet Its Climate Goals. Is Washington Listening?

Young Farmers Of Color Can Help the U.S. Meet Its Climate Goals. Is Washington Listening?

Getting young, climate-conscious farmers on the land "is the best way we can fight climate change,” one advocate says. 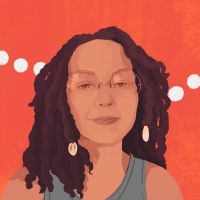 This article originally appeared in Nexus Media News and was made possible by a grant from the Open Society Foundations.

At Sanctuary Farms on Detroit’s East Side, Jøn Kent and a team of volunteers use cardboard and paper bags to starve invasive weedy plants instead of herbicides; they plant marigolds and lavender amid squash, melons, and collards instead of pesticides; and turn food scraps into lush, clean compost.

He and his business partner, Parker Jean, wanted to grow fresh produce for their working-class community, which Kent describes as a “food desert.” They also wanted to make sure their farming practices didn’t contribute to the area’s water pollution crisis.

“In Michigan, we have been left with polluted waters in Black neighborhoods from Benton Harbor to Flint,” he says. So Kent and Jean, who launched Sanctuary Farms in 2020, turned to regenerative agriculture practices, like alternating flowers with crops to attract pollinators and repel pests, to have a positive impact on the environment.

“The goal here is to really create a food sovereign, energy efficient, zero-waste place, so our community knows it’s possible to live off the land,” says Kent.

Many young farmers share Kent’s commitment to sustainability, according to a new report from the National Young Farmers Coalition (NYFC). In a survey of over 10,000 farmers across the country, 86% of respondents under 40 said they used regenerative farming practices, which the survey defined as “an approach to farming and ranching that builds healthy soils and ecosystems, supports climate-resilient farms and communities, and addresses inequity in agriculture.”

Of course, as the survey notes, regenerative farming practices aren’t new. Indigenous communities — many of whom were pushed off the land they stewarded for millennia — innovated and practiced these farming techniques for generations.

Overhauling the United States’ agriculture system will be crucial to meeting its climate goals. Farms cover about 40% of all U.S. land, according to the most recent census, and agriculture accounts for about 11% of the country’s greenhouse gas emissions.

Some regenerative farming practices, such as no-till farming, cover cropping, and rotational grazing can help the U.S. reduce those emissions.

Fifty-nine percent of respondents said finding affordable land to buy was “very or extremely challenging.” Among those those who identified as Black, Indigenous, and other people of color (BIPOC), that figure was 65%. Respondents also reported difficulty accessing capital, affording healthcare and paying off student loans. In all cases, BIPOC respondents reported greater difficulties than their white counterparts.

These challenges may explain why more young people aren’t taking up the profession. The average age of a U.S. farmer is over 57, and is steadily increasing, according to the most recent Census of Agriculture. According to that report, less than 8% of farmers are under age 35.

Kent, 29, spent his early childhood in Detroit. “My community is often hit with the reality that the government doesn’t always come through for us,” says Kent, who is Black. Kent, who only recently paid off his student loans, says accessing capital to finance Sanctuary Farms was a challenge, but adds, “In spite of our lack of finances, we have faith,” he says. “We just gotta keep puttin’ in that work.”

Climate change poses another challenge. More than 73% of respondents said they experienced at least one “climate impact,” in the form of extreme weather, hotter temperatures or excess precipitation, on their farm in the last year. That figure is up from 66% in 2017, the last time NYFC released a survey.

For some, climate change has wrought devastation.

Carolina Mueller, a farmer from Austin, Texas, and coalition manager with NYFC, says she suffered over $30,000 in losses when a winter storm in February 2021 froze much of the state.

“Winter storm Uri last year was incredibly traumatic and damaging,” Mueller says. “Temperatures plummeted quickly, and we lost a lot of our livestock and produce.”

Among young farmers, there is an increased awareness of the need to adapt to the changing climate, says Debi Kelly, a field specialist and horticulturist with the University of Missouri’s Extension program.

“Some of those old ways of agriculture can’t continue anymore,” says Kelly. “With all these weather events and with population growth, we have to learn how to do things a little bit differently.”

Kelly says that younger farmers she works with tend to be more willing to take risks and change their practices than older farmers. She says she also noticed younger farmers tend to be more concerned with how their operations affect their surrounding communities. According to the NYFC survey, 83% of young farmers reported that “one of their farm’s primary purposes for existing is engaging in conservation or regeneration.”

The NYFC report comes out as lawmakers are debating the 2023 Farm Bill, a massive omnibus bill that goes before Congress roughly every five years and includes farm subsidies, climate resilience initiatives and food assistance programs.

If the U.S. is to meet its climate goal by 2030, which requires a reduction of 50-52% in greenhouse gas emissions from 2005 levels, Polanco says she believes it will need a transformative farm bill, one that addresses the climate crisis and the rising costs of land.

“Land is climate infrastructure for our young farmers,” Polanco says. But land costs are soaring. According to the US Department of Agriculture (USDA), farmland values increased by $420 per acre, or more than 12%, in 2021.

The report, which notes that “land ownership is rooted in the dispossession of Indigenous land,” also calls on the USDA to support Indigenous communities in securing greater land sovereignty and for the agency to seat the Tribal Advisory Committee, a body created in 2018 to facilitate coordination between Native groups and the federal government.

Polanco says she’d like to see a farm bill that invests in community-led projects, prioritizing projects led by and benefiting socially disadvantaged and economically distressed farmers and ranchers. She says a successful bill would also invest in climate-smart farming adaptations.

These adaptations would look like an expansion of programs like the USDA’s recently launched Partnerships for Climate-Smart Commodities initiative, which supports the production and marketing of climate-smart commodities; increases funding for first-time farmers and ranchers and improves access to crop insurance programs. The Inflation Reduction Act, which set aside $20 billion for USDA conservation programs, presents an important opportunity for young farmers as well.

Getting young, climate-conscious farmers on the land “…is the best way we can fight climate change,” Polanco says. “But we desperately need climate investments that are part of a safety net for farmers, so they can continue stewarding the land when a disaster strikes.”

Britny Cordera is a published poet, nonfiction writer and journalist in St. Louis who investigates the intersections between environmental justice, climate solutions and (pop) culture. Her poetry and nonfiction can be found or is forthcoming in Grist Fix, The New Territory, Rhino, Narrative and PANK. When she is not reporting or writing poetry, Cordera teaches for St. Louis Poetry Center and roller skates in her free time.

Follow Britny .(JavaScript must be enabled to view this email address)

I've always loved to read Next City's coverage of global solutions to urban issues. It's surprising how often solutions to everything from micro-mobility to pollution, from as far and wide as Syria and Singapore, can help us rethink our own approaches to these universal issues.