$18 Billion in Debt, Detroit Files for Bankruptcy – Next City 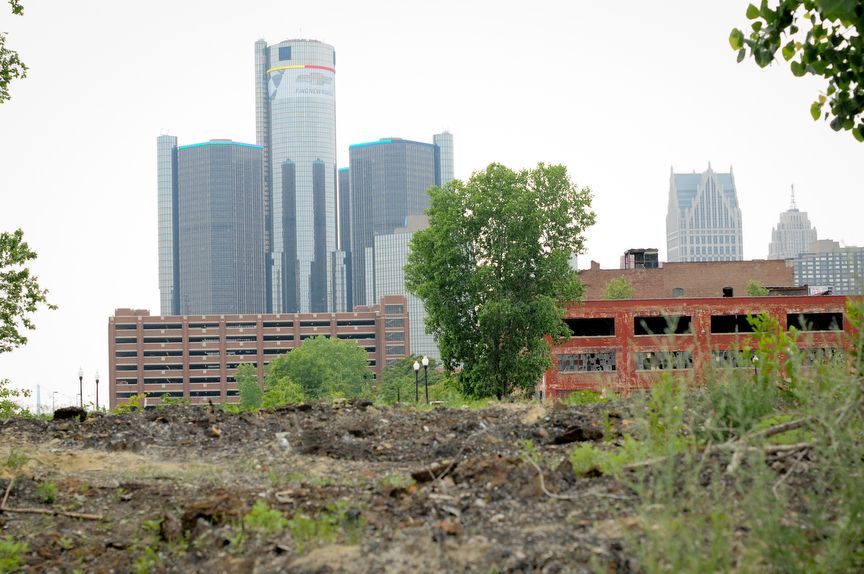 In the largest municipal bankruptcy ever, Detroit emergency manager Kevin Orr declared Detroit bankrupt today. This comes after Orr hedged the issue, declaring Motor City insolvent but never once mentioning the word “bankrupt” in a 41-page report on the city’s finances issued back in May.

Many had expected this day would come soon enough. Detroit has been under state-mandated emergency management since Michigan Gov. Rick Snyder appointed Orr to the position in March 2013. The following month, Orr singed an order placing himself in charge of the city’s policy apparatus, meaning that for the moment Detroit officials can’t enact anything without his approval.

Snyder, whose approval the filing also required, laid out a four-part rationale why he let Detroit turn to bankruptcy:

Right now, the City cannot meet its basic obligations to its citizens.

Right now, the city cannot meet its obligations to creditors.

The filing for bankruptcy comes after decades of staggering loss. Though the Detroit metro area retains more than 4 million people, only 700,000 live in the city core — down from the city’s peak population of more than 1.8 million. With more than 60,000 vacant properties, a median household income of just over $26,000 and a racially segregated population, the city has struggled to figure out a path toward economic sustainability. As bankruptcy has loomed for the past few years, the question was less if, but when, the city would file.

Municipal Bankruptcy Across the Country

Detroit is not the first — nor will it be the last — American city to go bankrupt. To see all of the municipalities that have filed for Chapter 9 in the last three years, check out the following map from Governing magazine. The red markers represent cities, counties and towns, while the gray markers represent utilities and other municipal authorities. 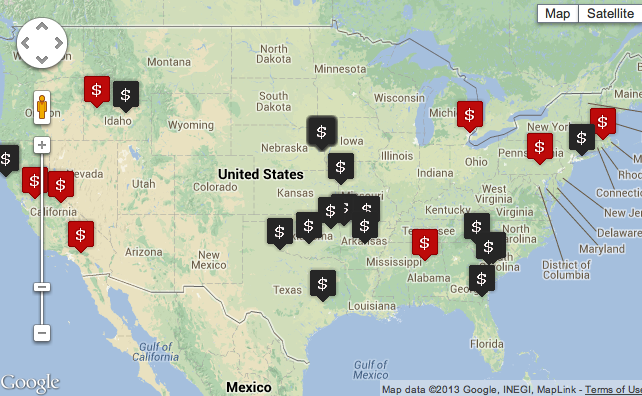 Until today, Stockton, Calif. had been the largest U.S. city in bankruptcy since filing in June 2012. What, if anything, will Detroit learn from this inland city in northern California? Speaking with Next City today, Stockton Public Information Officer Connie Cochran said it was hard to comment on Detroit’s condition, given that Stockton and Detroit had different reasons for going under.

“We had been adjusting our budget since 2008, [implementing] service reductions for years before filing bankruptcy,” Cochran said when asked how bankruptcy affected Stockton. The city has reduced its fire and police services by more than 25 percent, resulting in what Cochran called “minimal services.“Cochran said, “Our city council has been faced with a lot of really tough decisions and we’re working really hard with everyone to address our issues.” In particular, she pointed out a $600 million unfunded liability, adding, “It’s been painful.”

The City of San Bernardino, also in California, is right now “struggling through” its municipal bankruptcy, according to Rebecca Kramer, Community Relations Supervisor. While paperwork for bankruptcy was filed in July 2012, the bankruptcy has yet to be finalized in court. San Bernardino is the second poorest city in the country, after Detroit. When asked how the bankruptcy has affected the city, Kramer says “Has it been a challenge? Absolutely. Was it something we needed to do? Absolutely.”

Much like Detroit, San Bernardino has been the victim of a multiplicity of economic problems. “Certainly we had the financial downturn, drops in terms of our property values and the tax revenue, rising costs of operations happening while you have decreasing revenue. Finally, we had restructuring in the state and the conomic programs. If there was a tipping moment, [the dissolution of redevelopment] was the final tip. It’s kind of like a perfect storm.”

“This is a situation that’s been 60 years in the making in terms of the decline of Detroit,” Gov. Snyder says in a video explaining his decision, before rattling off alarming numbers about the city’s debt and the poor services it provides to its citizens.

Snyder calls the bankruptcy filing “an opportunity for a fresh start.” Richard Florida, the Rise of the Creative Class who inspired Michigan to undertake a ““Cool Cities Initiative” seemed to agree, saying:

Detroit actually looks better economically than it has in some time. Bankruptcy is not a death sentence. Could signal turning point.

That fresh start will take a while, according to Reuters:

It may last up to two years and involve a lot of litigation. New precedents about the treatment of bondholders, swaps counterparties, employees and pensioners will likely be developed. Conflicts will arise between the Michigan Constitution and federal bankruptcy law. The fights and protests may be vicious. But in the end, Detroit may be reborn with finances it can sustain and public services that should make the city livable.

And as seen in other cities like San Bernardino, bankruptcy will anger those who lose their pensions and retirement benefits. There former police officer have taking to writing a blog about the city’s demise and recovery. See their feedback for city government below:

Detroit has made quite a few Next City headlines over the past year. Most notably, Anna Clark took a deep look at Detroit Future City, a 50-year plan that hopes to turn the city around using an amalgamation of progressive urban planning strategies.

In another long story last summer, Clark wrote about the non-profit economic development corporations that keep some central Detroit neighborhoods afloat and well serviced despite the dire situation in the city at large.

More recently, there have been a number of promising, albeit small-scale, developments coming out of Motor City. This week a developer announced his intentions to purchase and rehab the massive, long-vacant Packard Plant. The public-interest business incubator Practice Space will open its doors in Corktown this September.

See this roundup for more.

To read the whole bankruptcy filing, see the document below: