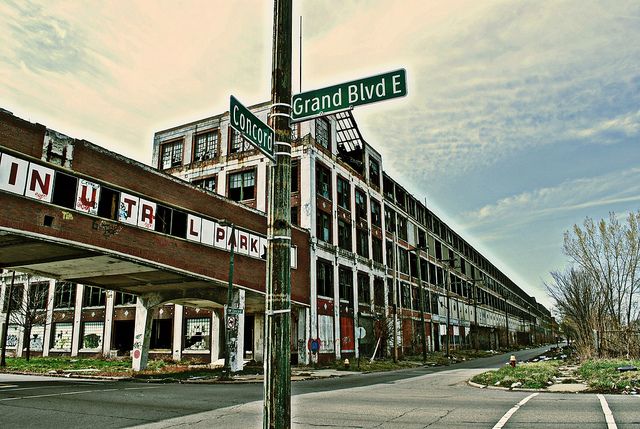 Illinois developer Bill Hults wants to buy the storied factory out of foreclosure for $974,000 in unpaid taxes. He plans to rehab and turn the decayed, 3.5 million-square-foot structure into a mixed-use space, according to the Detroit News.

The roofs are collapsed, no one knows the extent of asbestos and there is so much detritus — including, notably, various watercraft — that the cleanup and rehab will be, to put it lightly, an undertaking. As one commenter remarked of the plant, which closed in 1956, “One drive by of the old Packard Plant and you would have to question the man’s sanity…”

But we have to applaud Hults’ audacity. The Packard Plant has been an urban explorer’s playground for years and used to host some historic raves in the ’90s. No one ever thought it could be anything but a ruin, and Hults will have to plug his ears to drown out the critics. They won’t believe him until it’s finished.

The project could cost upward of $350 million and take between 10 and 15 years to complete. Hults is working with various local and out-of-state investors — which he would not name — and a humanitarian group that wants to shell out $85 million for veteran and senior housing. He said there will be market-rate and affordable housing, though he didn’t specify how much of each. The one promising thing to take away, according to the News, is that the developer is also in talks to buy a facility for manufacturing precast concrete walls for the rehabilitation. Hults has “pledged to give hiring preference to city residents.”

If Hults does go through with this, the development could see a spike in jobs, from cleanup and demolition to construction and concrete manufacturing. Detroit isn’t short on skilled workers, and the development might do its small part to create some jobs, even if they are temporary. There are plans for retail, restaurants, a boutique hotel and a coffee shop. And, no surprise here, Hults is in talks with start-ups who have expressed interest in the space.

But Hults does have a rocky past, with a trail of unpaid debts in the Chicago area. Records put the amount at $208,000. Hults said it’s only $50,000 and “should be resolved soon.” He chalked it up the 2008 crash, which affected developers across the country.

Detroit is attractive to developers and people flush with cash (see: Gilbert, Dan), but financing isn’t what it is in Silicon Valley. Capital isn’t growing on trees. The Detroit Free Press reported in May that developments like The Auburn and the recently-opened Broderick Tower, smack in the heart of downtown, needed 50 percent of their financing from “nontraditional sources.” It can take years to get the cash flow, which can slow or halt the timeframe for completion.

The Westin Book Cadillac downtown, which is mentioned in nearly every magazine feature about the city’s rebound, needed 22 sources of financing. Just because people love the Packard Plant and its significance to the Motor City doesn’t mean they’re lining up to invest $15 million. And Hults’ checkered past might give them pause.

I will happily eat crow if Hults follows through on this, especially if he upholds the promise of housing for veterans and seniors and hiring locals. But we’ll keep an eye on every move he makes — he could cut back on affordable housing options for more market-rate apartments, for instance — as this pie-in-the-sky idea goes from dream to potential reality.