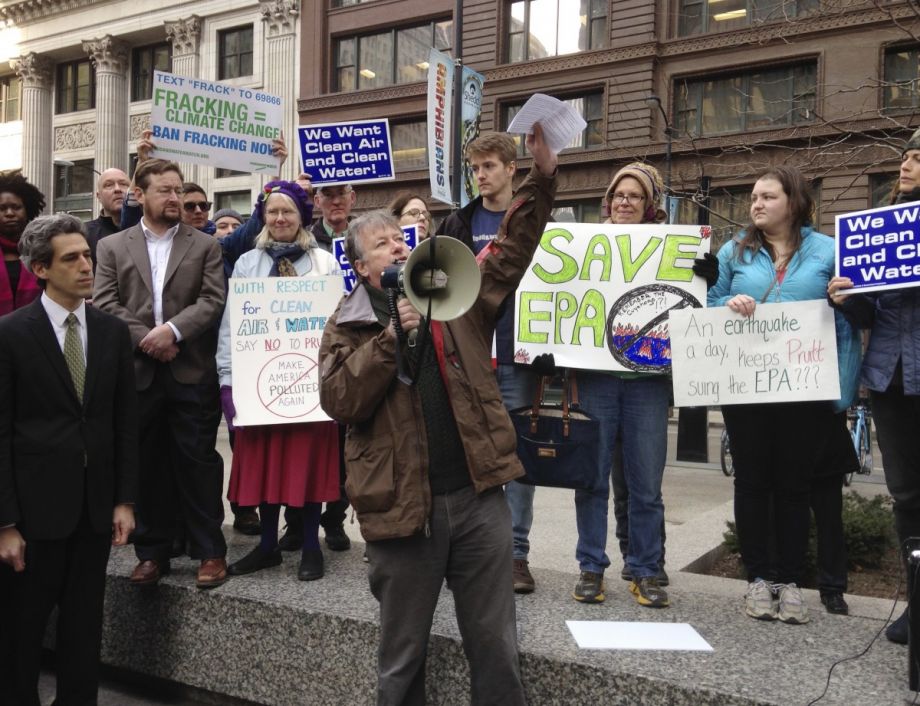 In February, Environmental Protection Agency employees and activists in Chicago protested the nomination of Scott Pruitt for administrator of the agency. (AP Photo/Carla K. Johnson)

President Donald Trump’s budget blueprint calls for the closure of two EPA offices — and officials in Chicago are worried they could be on the chopping block.

So far, nothing’s definite. Chicago Sun-Times columnist Michael Sneed cited an unnamed city source in an April 17 article reporting that the regional branch office in Chicago could be closed and consolidated with one in Kansas.

Whether or not Chicago, specifically, is on the chopping block, the EPA is in for a rough ride under Trump.

In March, The Atlantic reported:

Faced with a cut of $2.6 billion, [the EPA] would stand to lose approximately one-third of its total budget, cutting its resources to the lowest level in 40 years, adjusted for inflation. The cuts to the EPA are significantly greater than those suggested by congressional Republicans — who proposed a modest $291 million cut from former President Obama’s last budget request — and they’re achieved in part by eliminating 3,200 positions, one-fifth of the staff.

In Chicago, those cuts could translate into more contaminants in the Great Lakes. They would also deal (yet another) blow to Flint, Michigan. The EPA’s Region 5 has been criticized for its delayed response to the lead crisis in Flint, but, as the Detroit Free Press points out, in the end it “was EPA officials who learned that the state Department of Environmental Quality had not required corrosion treatments when Flint switched to using the Flint River for its water, resulting in lead leaching from aging pipes.” The paper adds that the “city has since switched back to Lake Huron water and is treating its water, though lead levels remain a concern.”

A new Chicago Tribune op-ed by Frank Corrado, the first director of public affairs for Chicago’s regional EPA office, sheds some fascinating (and potentially devastating) light on what the agency has accomplished locally since its creation by Richard Nixon (“yes, that Richard Nixon”) in 1970.

“I had just been hired in the old water pollution program when the EPA was created and the great battle to save the Great Lakes was getting underway,” he writes.

The pollution problems were staggering — massive discharges from the northwest Indiana steel complex, the Wisconsin paper industry in Green Bay, the taconite tailings in Lake Superior, emissions from automobiles produced in Detroit, farm wastes in northwest Ohio, and sulfur dioxide from power plants in southwest Ohio, not to mention those right here in Chicago.

Leaking gas station storage tanks, discharges from Dow Chemical in northeast Michigan, waste contamination in the Mahoning Valley in eastern Ohio and outdated sewage treatment plants everywhere were part of a long list of problems created during the heydays of Midwest manufacturing.

Addressing those threats to public health is what Region 5 has stood for since its creation, he says. The laws put in place to curb that kind of mind-bending pollution are laws that “the Trump administration is now attempting to destroy.”