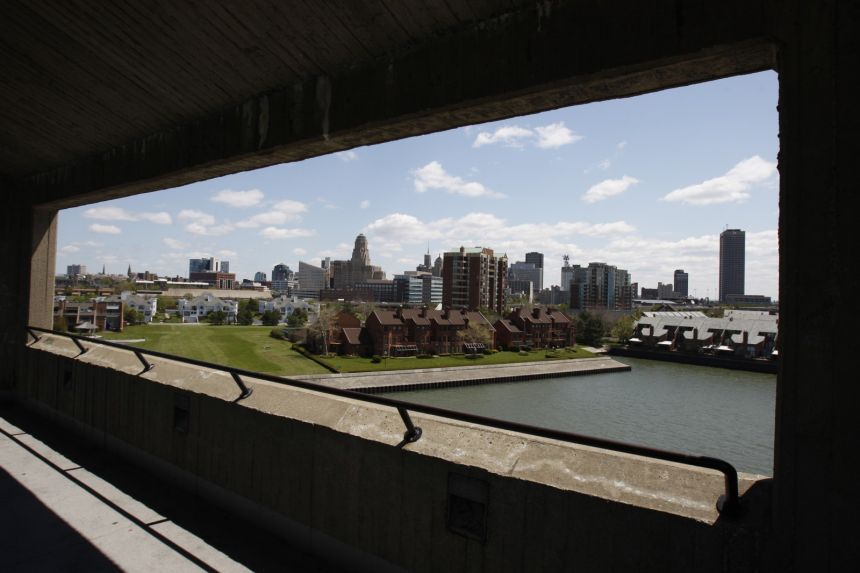 The city of Buffalo is shown from a Lake Erie waterfront overlook tower. (AP Photo/David Duprey)

Cuts to the U.S. Environmental Protection Agency budget reportedly being considered by President Donald Trump are raising alarm in the Midwest among those worried that a potential $2 billion trim will mean the near death of the EPA’s Great Lakes cleanup program. In the last several years, the initiative has seen millions spent on revitalizing waterways connected to the lakes — improvements that politicians on both sides of the aisle have argued are critical to everything from economic development to public safety in U.S. cities.

To adjust for what would amount to a 25 percent budget cut, Oregon Live reported last week, the EPA would curtail funding for or eliminate 42 programs, with the Great Lakes Restoration Initiative’s funding dropping from $300 million a year to $10 million. That would be a 97 percent dive for a program that has consistently been funded with about $300 million annually since its beginning in 2010.

In response to the reporting, the Alliance for the Great Lakes, a Chicago nonprofit, released this statement: “Memories are short. But it was not so long ago that our country united for change, shocked by images of a river on fire. Federal laws are the cornerstone of bringing clean water to people, and they only work when enforced. We have seen the tragedy and heartbreak that occurs when our nation’s clean water programs fail. Lead-tainted drinking water flowing from taps in Flint, Michigan. Toxic algal blooms shutting down Toledo, Ohio’s drinking water system.”

Additional reaction has been swift and bipartisan. The GLRI funds state and local projects that combat invasive species, restore wildlife habitats and clean up watersheds polluted by a Rust Belt economic legacy, across eight states and two Canadian provinces.

“We have previously communicated with the new administration that our Great Lakes must be a priority and the Great Lakes Restoration Initiative must be fully funded,” Rep. Fred Upton, a Michigan Republican, said in a statement. Senate Minority Leader Chuck Schumer, a Democrat from New York, told the Rochester Democrat and Chronicle, “Most Americans didn’t vote to ease up on polluters and leave themselves with dirtier water and air.” A rep for Ohio Senator Rob Portman, a Republican, said in a statement: “This initiative has been a successful tool in our efforts to help protect and restore Lake Erie, and Rob will continue to fight for it just as he did when the Obama administration proposed cuts to the program.”

Rich Cochran, president and CEO of the Western Reserve Land Conservancy, an Ohio nonprofit focused on conservation, says the pushback reflects a big shift in attitude toward the Great Lakes in the Midwest that’s occurred over the past few decades.

“People have appreciated the lakes in certain rural parts of these states for many years, but people in urban areas, where the industrial pollution was centered, have undergone a 180-degree change in attitude,” he says.

His group has used GLRI funding to clean up sediment pollution (which can cause toxic algal blooms) from a large river in suburban Cleveland that flows into Lake Erie, and to regenerate old industrial areas in the city to help with runoff into the sewer system. “The cities finally realize that clean Great Lakes are an essential asset of our entire region, and the lakes are not just a place to dump pollutants,” Cochran says. “It’s now about healthy drinking water, economic vitality, an asset for recreation and living, and clean industrial growth. Clean lakes are now part of the foundation.”

With the new attitude crossing party lines, the Trump administration may find the road to cuts difficult. Connected to the U.S.-Canada Great Lakes Water Quality Agreement, the GLRI has had overwhelmingly congressional support since its start in 2010, and fights against small cuts proposed by the Obama administration were won. A letter was sent to Trump on Feb. 13 advocating for keeping the funding at the $300 million level. It was signed by 45 members of the U.S House of Representatives, with 27 Democrats and 18 Republicans putting their names on it. More importantly, 14 of the 18 Republicans came from Ohio, Michigan and Wisconsin, which Trump won five months ago in the presidential election. These are states he needs to win reelection if he runs in 2020.

“Republicans and Democrats are tripping over each other to say who is the greatest friend of the Great Lakes,” says Nicholas Schroeck, director of an environmental law clinic at Wayne State University in Michigan. “We are seeing a unique blend of support from environmental cleanup supporters and the business community. Clean water resources, fishing and recreation activities in the lakes, and making the water a focus of urban design attracts talented young people and their families to cities now.”

As Next City covered in December, the money helped Buffalo with river rehabilitation that has allowed the city to reinvent its “waterfront and in the process, become a model that other legacy cities are looking to as they strive to reconnect with their rivers and lakes.” In an op-ed in The Hill Tuesday titled “Cuts to the Great Lakes Restoration Initiative: A plan to sink American cities,” Democratic Rep. Brian Higgins, who represents Buffalo, wrote that thanks in part to GLRI, “Water restoration efforts have led to more than $81.2 million in new private sector projects adjacent to the Buffalo River since 2013, helped contribute to more than $750 million in further investment nearby and interest continues to grow.”

“So many cities have turned their backs to their most valuable asset through the years, but are now finding that investing and cleaning up the water is sound economic development, and that is an important part of this program,” says Lynn Richards, president and CEO of the nonprofit Congress for the New Urbanism.