The Ethical Argument for Architects to Stand Against Trump – Next City

The Ethical Argument for Architects to Stand Against Trump 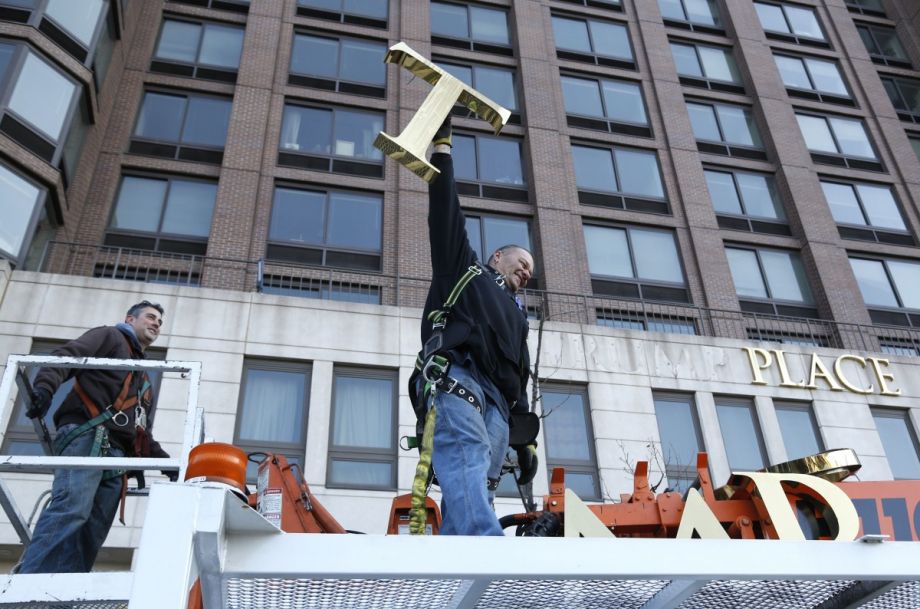 A workman holds up the letter “T” as they remove the letters from a building formerly known as Trump Place in New York in response to protest from residents who do not want to be associated with the president-elect. (AP Photo/Seth Wenig)

Post election, I’ve found myself referring to a specific quote by novelist and activist James Baldwin far more often then I would like to believe necessary in 2016.

“We can disagree and still [work together] as long as your disagreement is not rooted in my oppression, the denial of my humanity or my right to exist.”

It is with this quote in mind that I am struggling to reconcile with the AIA CEO Robert Ivy’s ill-advised, unwarranted and unnecessary statement of support for the president-elect. The profession of architecture has suffered from a crisis of internal and public confidence for a while and is currently going through a bit of a revolt after Ivy’s letter and subsequent attempts to clarify his intentions, after a loud backlash including a #NotMyAIA Twitter campaign. Mr. Ivy’s letter and follow-up suffer from three fundamentally flawed assumptions.

First, and probably most obvious, is that it was wholly irresponsible to conscribe all 89,000 members of the AIA into a commitment to work with this objectively bigoted administration, when in fact, you will likely see a large number of architects firmly planted on the side of the resistance for the next four years and beyond.

The second assumption was believing that the AIA membership had any interest in its leadership broadly speaking to our collective politics without the consent of the general body. You better be sure to speak with the people, if you intend to speak for the people.

Third, and potentially most critical, there’s an assumption that this conversation is primarily political in nature. It is not. It is a moral and ethical protest to the AIA agreeing to aid and abet an administration that premised itself on the idea of creating unsafe spaces for people of color, LGBTQ communities and people of the Muslim faith.

The initial letter was an act of carelessness deserving of contrition. That contrition came in the form of a vague memo to the editor of Architecture Newspaper written after the newspaper editorialized against Ivy’s letter and the surrounding uproar. Ivy’s memo calls for us to unite in the best interest of our country under the “eloquent” words of President Obama, and while I am certain it wasn’t meant to be, it rings of condescension. Never has the best interest of a country came in the form of an army of demagogues, nor has it been defined by creating walls that divide us (metaphorically or literally).

The de facto professional oath of the American Institute of Architects obliges us to be considerate of all aspects of architecture and design directly related to the health, safety and welfare of the constituents we serve. I often refer to the third, and possibly most atrophied principle, which calls on us to design spaces that engender a demonstrably positive emotional and physical response among and enable [equitable] access to everyone interacting with a space. I would argue that there is nothing demonstrably positive about the spatial implications of increased stop and frisk policies, continued housing discrimination, building a wall at the Mexican border, religious profiling, eliminating the affordable care act and planned parenthood clinics, increased spending for federal and state prisons, and defunding sanctuary cities. I would argue that this all has the potential to create negative emotional and physical responses in the built environment and further detach the profession of architecture from the public at large.

Nearly sixty years after the AIA was admonished by the National Urban League’s Whitney M. Young for lacking the courage to speak out on issues of injustice, we find ourselves in the same position of indifference to the most oppressive struggles of many Americans. He noted:

“You are not a profession that has distinguished itself by your social and civic contributions to the cause of civil rights, and I am sure this has not come to you as any shock. You are most distinguished by your thunderous silence and your complete irrelevance.”

It is still not a shock, and I would say even more egregious, to side with those opposing the civil rights of others. I believe we owe it to ourselves to be a better profession. One that stands on the side of the people. We must seek to be thunderously loud and completely relevant towards the cause of civil rights as much and as often as it has implications in our work.

We have fallen short and Mr. Ivy, in this instance, does nothing to belie the concerns of the membership. It is all too easy for us to be cynical and skeptical at times like these, when the more precise tool (and one we are built for) is to be critical and creative. The AIA made a mistake and has apologized both publicly and privately, but apologies mean nothing without action. Now is the time to press the Institute to act. Act as an apolitical (not bipartisan) force for social good in the built environment. I wholeheartedly believe that to protest is to have an unyielding faith in the potential for a just society. As a member of the AIA, I am not removing myself from the conversation. Instead I will continue to stand and I will continue to protest, when necessary, in hopes of a better profession.

To that end, I encourage those within the profession to acknowledge the cultural implications of our work and become forceful advocates for true equity and design justice. I am calling on the AIA to reject its historically passive stance on issues of social importance and take an active position on the social issues that have direct implications in the built environment. Moving forward, the AIA should elevate investment of resources into the research and initiatives focusing on equity and justice. Additionally, the AIA in partnership with The National Organization of Minority Architects, Arquitectos, the American Indian Council of Architects and Engineers and other cultural architecture organizations should develop a multipoint platform for Design Justice that outlines the ideals of a just city and a just profession.

In all of this, we must always remember that architecture has the power to speak the language of the people it serves, but we have to be willing to serve the people without power.

Bryan Lee, Jr., is an architect, educator, writer and Design Justice Advocate. He is the Founder/Design Director of Colloqate Design, a nonprofit multidisciplinary design practice, in New Orleans, Louisiana, dedicated to expanding community access to design and creating spaces of racial, social and cultural equity. He has led two award-winning youth design programs nationwide and is the founding organizer of the Design Justice Platform. He was most recently noted as one of Fast Company’s Most Creative People in Business for 2018, a USC MacArthur Civic Media Fellow, and Colloqate was the youngest design firm to win the Architectural League’s Emerging Voices award in 2019.