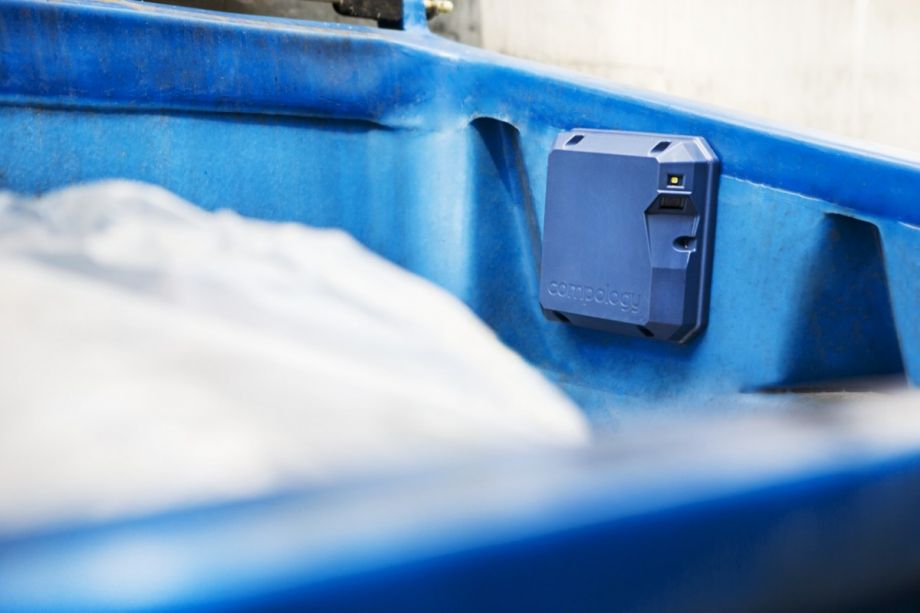 Garbage collection can, unsurprisingly, be somewhat wasteful. Conventional practice dictates that trucks drive set routes through cities, picking up containers on a fixed schedule, whether they’re full or not. Waste processing — what happens to material after it’s collected — has seen a slate of tech innovations in recent decades (though companies are still searching for the silver bullet that could fully automate single-stream recycling). Consumers and waste generators have been encouraged to change their relationship to refuse by reducing, reusing, recycling and composting (though recycling rates remain stuck around 35 percent). Entrepreneurs Jason Gates and Ben Chehebar saw an opportunity to optimize another side of the equation: garbage collection.

They created a sensor, which they sell through their company, Compology, to read the volume of material in any dumpster — from the small containers found behind restaurants and apartment buildings up to the large containers found at construction sites — by using a proprietary visual analysis technology. About the size of a hardcover book mounted on the upper right interior of any dumpster, the sensor communicates that data with a software that helps waste haulers manage their fleets dynamically, building a new route for trucks every morning based on which containers need pickup and where. The software syncs to a tablet in the driver’s cab and provides him or her with a route and tracks information about mileage and timing.

Gates says this cuts down on redundant stops for drivers, so they might pick up a full container from a given apartment building once a week, instead of a half-full container twice a week. Waste generators “know they are paying a waste hauler to dump air,” says Gates, and waste haulers know they are burning fuel to drive around and collect that air. Both parties stand to save money with a more efficient process. The city of Santa Cruz has been able to reduce the number of trucks in its fleet by about 40 percent since installing Compology sensors, according to Gates.

Waste management companies often enter into contracts with municipalities based on the resale value of the commodities they collect. As the value of recycled materials has dropped and stayed low — leading some to suggest that manufacturers should take full responsibility for the life cycle of products — the market has become unprofitable for haulers. Houston recently dropped its contract with Waste Management, the country’s largest hauler and a Houston-based company, after the company wanted to raise rates to approximately $10 million for a three-year contract. Waste Management said it was losing $1 million a year and couldn’t continue to operate at current rates.

Of course, recycling is beneficial, even if short-term profits are low, and its value will increase as raw materials become more expensive. Instead of raising waste collection rates to keep recycling afloat, Gates argues, the way to go is making haulers more efficient to save money. (Waste Management does utilize some Compology sensors already, though not yet across their 2.5 million containers nationwide.)

Because the sensor detects volume visually, it can also allow agencies to see who is putting what in their recycling bins, and give targeted feedback to customers who are filling their containers with non-recyclables. (Compology sensors can be installed on containers for landfill waste, recycling or compost.) Gates says building managers also sometimes ask haulers for their waste data to be used for LEED certification or corporate sustainability initiatives.

A similar concept for street-side garbage collection, the solar-powered BigBelly trash receptacle, also provides real-time data to waste management companies about volume, allowing agencies to pick up only when necessary. Cities continue to adopt the containers, with Boston among the recent implementers. But a single BigBelly container costs about $3,000, and requires replacing existing cans. Gates won’t say exactly what a Compology sensor costs — the waste management companies purchase them and pay per container per month for access to software tools — but they don’t require all new fleets of dumpsters.

Compology also now has a program for municipalities looking to optimize waste collection at their facilities, like libraries, police and fire stations, and other public buildings. Gates says municipalities have a chance to shape the history of this industry by example and by legislation. “The interesting thing about the waste industry in the U.S. over last 30 years, innovation has all been driven through regulation,” he says, like mandated composting and recycling. “Putting regulations in place and then enforcing them, that’s a really big driver of change.”