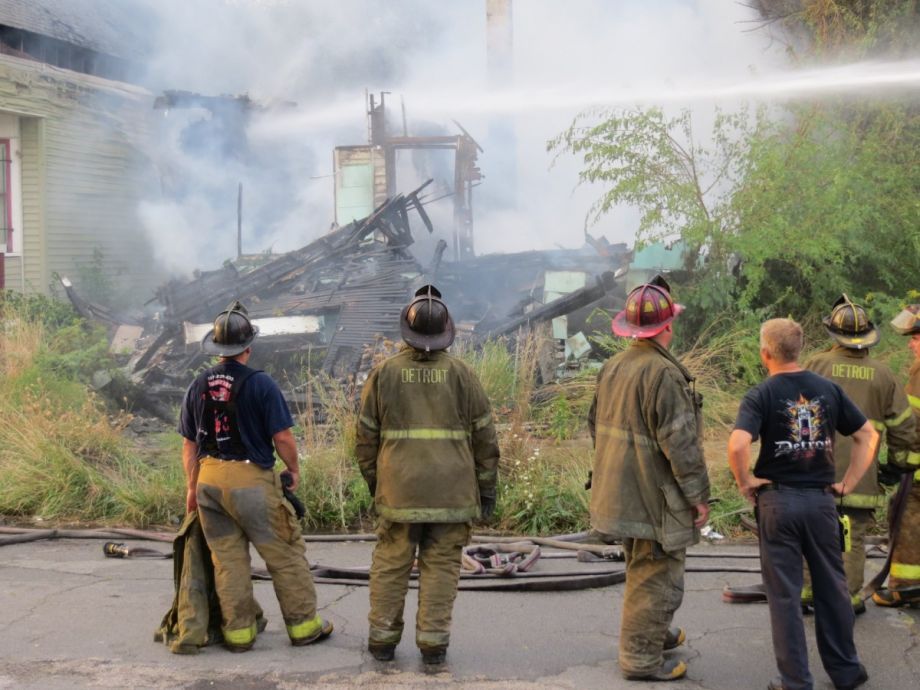 Detroit firefighters putting out a fire. Yesterday, the pension boards reached a tentative deal with the city that keeps monthly pension checks for fire and police intact. Credit: Sean Marshall on Flickr

Detroit’s pension boards reached an agreement late Tuesday with the city on retiree benefit cuts. Retirees took a lighter hit than was initially predicted — a victory for those who were facing steep and potentially life-altering cuts.

“These ‘tentative settlements’ tonight are the result of months of hard work and good-faith negotiations,” a statement released by the two pension fund boards said.
The key word here? Tentative.

Detroit’s local papers — and, to a small extent, national outlets — have glossed over some of the details of what has been called the “Grand Bargain,” an $815-million rescue fund that would allow the Detroit Institute of Arts — whose artwork could still potentially be sold to pay off debts — to spin off as an independent institution. The $815-million deal would shore up pension debts over the next 20 years. Nine local and national foundations have pledged $365 million dollars. The DIA has pledged $100 million. And there is a tentative deal for $350 million in state funds, which must be approved by the legislature.

It’s that last wrinkle that gives me pause. The entire state of Michigan is not exactly fond of Detroit’s woes, nor do they have any interest in bailing the Motor City out. But many in the media make it seem as though it’s a foregone conclusion that the legislation will pass smoothly. Another factor that could complicate the process is the looming fall election for Michigan’s House of Representatives, which could force some incumbents hands who might have otherwise approved the deal.

State lawmakers will break for recess at the end of May. That only gives Gov. Rick Snyder six weeks to push for the deal before the city enters the confirmation hearing for its “plan of adjustment,” Emergency Manager Kevyn Orr’s framework for a path forward, in mid-July.

But the Detroit Metro Times posed a question in this week’s issue, on stands today, that can’t be stressed enough:

Behind all of this mess, the group that’s left in the lurch is the multitude of city retirees. Even if they accept Orr’s cuts, what happens if the state fails to approve its $350 million pledge — how steep would the cuts be then?

Calls I made to Kevyn Orr’s office earlier this week asking the same daunting What If question weren’t returned. And while pensioners should be thrilled that they aren’t going to be left out to dry with dramatic pension cuts, they’re not out of the woods yet. It’s up to lawmakers to decide their fate.