Creating a Global Geography of Wheelchair Accessibility – Next City 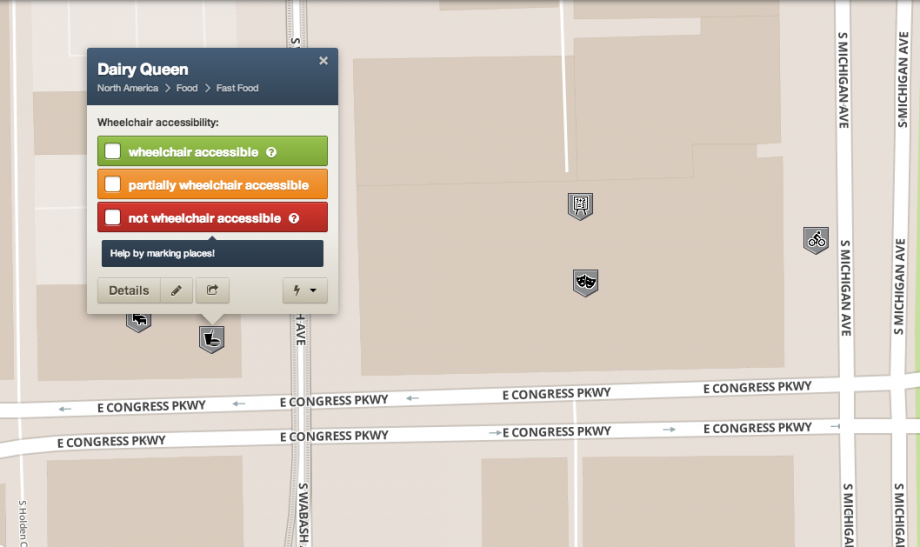 A Wheelmap view of Chicago.

When OpenStreetMap began in 2004, creator Steve Coast’s simple ambition was to access a map of his neighborhood. (He lived in the U.K., where maps were held by the government’s Ordnance Survey.) In the intervening years, OpenStreetMap has evolved into the Wikipedia of the world’s geography — anyone can edit it, and both its map tiles and underlying data are freely usable. OSM has become the base layer for everything from Foursquare to Craigslist to Wikipedia itself. And people the world over are constantly building it out for all sorts of purposes, from mapping roads in the aftermath of the recent Philippines typhoon to mapping golf courses, just because.

One of the more intriguing uses of OpenStreetMap at the moment, promoted as part of this week’s International Day of Persons with Disabilities, is annotating OSM with a layer of knowledge on places that have disability implications. Of particular note: wheelchair accessibility. OpenStreetMap has a convention for disabilities in place already — “wheelchair=no,” for example — but there are tools like WheelMap, created by Berlin-based non-profit Sozialhelden, that make it easy to indicate whether restaurants, stores and so on are wheelchair accessible. There are mobile apps for doing it, which make for particularly quick work. There are even built-in ways to ask friends in other cities to check-in on an establishment, growing the world’s knowledge of accessible spaces without demanding much effort.

Wheelchair accessibility is the sort of geographic granularity that may be of marginal interest to, say, the Google Maps team, but is hugely important to those whom it affects. That makes it a bit like the orphan drugs of geographic work; that is, the sort of solution that is life-changing for those living with the problem, but of such limited impact that it doesn’t make sense for the powers-that-be to pursue it. In this case, however, disabled people and those who care about them can make the fixes with their own hands.

Having that data on wheelchair accessibility freely available and already tied to maps opens up all sorts of possibilities, like creating apps that plan out wheelchair routes in the same way others plan out bike routes. Here, for example, is one such tool from Germany.