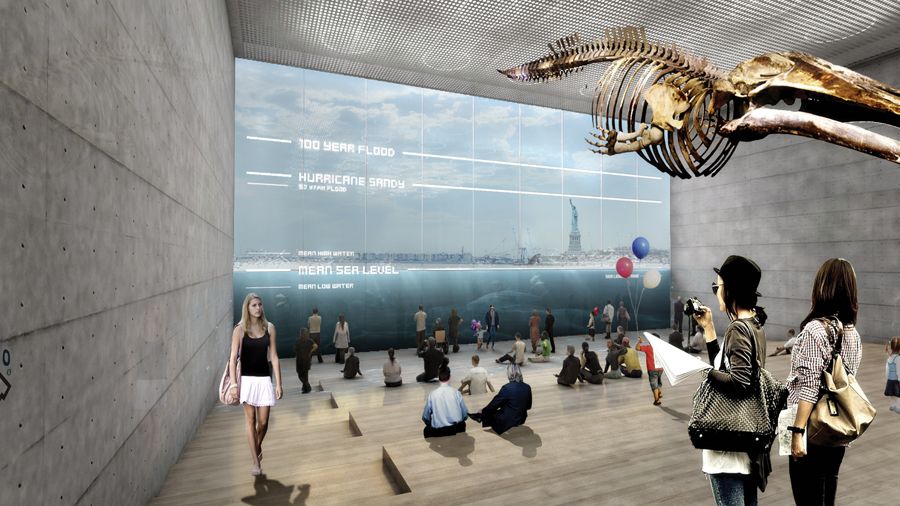 A rendering of one part of The Big U proposal (not included in the first, funded phase of the project). Credit: The BIG Team / Rebuild by Design

The Rebuild by Design competition, sponsored by the Department of Housing and Urban Development, is an innovative federal effort to deviate from the standard post-disaster response. Instead of simply assisting in rebuilding what existed before, thus ensuring the area in question will be vulnerable again once the next storm hits, the idea here was not just to rebuild, but to rebuild better and safer – to bounce forward, so to speak. The competition made every effort to achieve this objective. But did it succeed?

In the short term, definitely, yes. The winner of the largest grant was The Big U system, a storm-surge berm of parkland and other structures intended to wrap around lower Manhattan from the East River to the Hudson. Yet I have a concern: such protection will work well at least into the 2050s, maybe even longer. But will it give residents and businesses a false sense of longer-term protection? Will it discourage much needed investments into solutions behind The Big U that will be needed to mitigate risks from continued sea-level rise by, say, the end of this century?

This is a problem that bedevils many cities’ climate change adaptation plans in general. Even New York’s overarching storm-protection and adaptation plan – a $20 billion multi-pronged strategy hatched under Mayor Michael Bloomberg and easily the most comprehensive plan in the U.S. – uses only those parts of models that predict climate trends through the 2050s, but no further than that (although its own climate change and sea-level rise models have just been extended to 2100.)

New Orleans had storm-protection infrastructure, too. The construction of those protective levees began largely in the 1960s, also in response to a devastating storm – Hurricane Betsy. But the city suffered half a century later, when Hurricane Katrina overwhelmed the trusted protections that had not been upgraded for unanticipated sea-level rise and local subsidence.

Like the levees in New Orleans, The Big U is largely designed to resist moderate storms. But such fixed-height defenses can be overwhelmed by bigger storms, and in time, sea-level rise will make lower Manhattan vulnerable to even moderate storms. Therefore I suggest that The Big U plan be amended by programs that prepare for the longer run. To truly learn to live with water, New York needs to make, at least in current and future flood-prone areas, its infrastructure submersible; remove vital building systems from basements to higher floors or roofs; and eventually connect skyscrapers with “high-lines” like the recreational park not far from the Hudson River. By 2100, we need to have transformed many city streets into Venice-like canals so that businesses can continue to flourish; that goods, services, people and waste can get in and out unhindered using watertight subways, and where needed, barges, ferries and water taxis.

Protection is not forever, not in a world of rising seas. We need to learn how to live with the rising waters. We cannot reliably keep out the rising seas forever.

Dr. Klaus Jacob is a special research scientist at the Lamont-Doherty Earth Observatory of Columbia University.