The Fight to Preserve Urban Parks for People – Next City

The Fight to Preserve Urban Parks for People 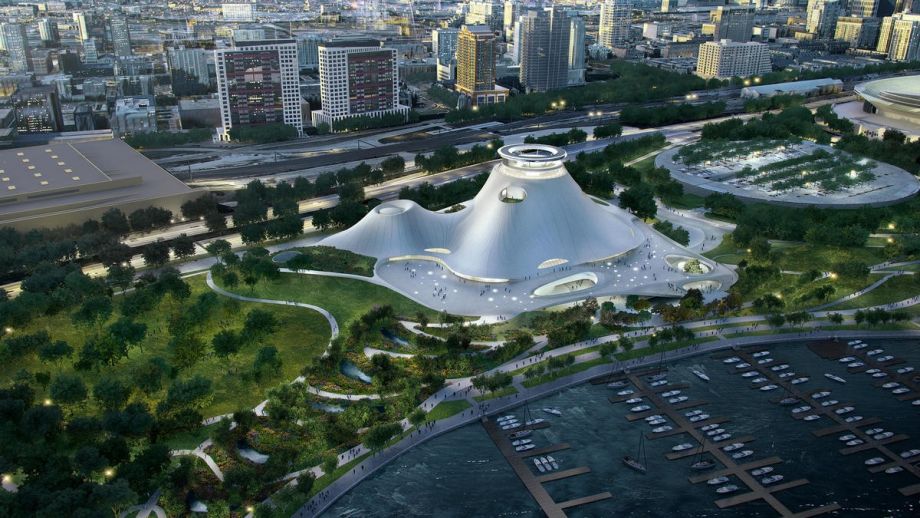 When President Obama announced last summer that Chicago’s Jackson Park — the 500-acre Olmsted-and-Vaux-designed park in his old South Side stomping grounds — would be the site of his new presidential library, reactions were mixed. On one hand, the city would gain a historic cultural institution that would also potentially benefit nearby neighborhoods. But as many park advocates countered, building it inside the historic park also meant permanently taking vital, irreplaceable open parkland away from residents.

Interestingly, at the same time this conversation was unfolding, the Chicago nonprofit Friends of the Parks had just emerged the victors in a protracted fight against proponents of George Lucas’s $750 million Lucas Museum of Narrative Arts, a project planned for public parkland along Lake Michigan.

It’s no surprise, given the scope and gravitas of both projects, that parkland taking has become a highly publicized issue in the Windy City. But Chicago is far from the only place struggling with the problem. Despite the noted benefits of open recreational space in urban areas, parks in many growing, revitalizing cities are increasingly vulnerable to the view that all open space — including designated parkland — is fair game for development and for other uses. Park advocacy groups around the country have been lobbying against everything from proposed athletic stadiums and private golf courses on parkland to urban infrastructure projects that hinder access or enjoyment of the park.

“It’s not that some of these projects aren’t valid,” says Charles Birnbaum, the president and CEO of the Cultural Landscape Foundation. “They’re just not valid through the confiscation of parkland.”

Even in the absence of a direct threat of development, some park advocacy groups have taken steps to protect local parkland from potential loss. Consider Philadelphia, where the city’s Parks Alliance worked with the allies inside the government, citizens and other stakeholders to push for legislation that would weigh potential projects against the principle of “no-net loss of the parks, recreation and open spaces.” The resulting Open Lands Protection Ordinance was signed into law in 2011.

Many cities and states have similar legislation in place, though such laws aren’t always a blanket safeguard. They do, however, give advocacy groups a powerful tool in the quest to preserve their parks. This was absolutely the case with Chicago and the Lucas Museum, says Juanita Irizarry, executive director of Friends of the Parks. The group filed a federal lawsuit in 2014 asserting that allowing private development on the lakefront violated the public trust doctrine that had been set up to ensure Chicagoans’ free, unfettered access to that land. Some two years later, with the suit still tied up in court, Lucas decided to pull the plug on the project.

“The public trust and a lakefront protection law gave us legal leverage,” Irizarry says. But for park advocates who don’t have the benefit of law, she says, there’s still a range of options for taking action. “The first thing is that groups need to get connected with other stakeholders who care about this issue, and make a lot of noise. Sometimes the squeaky wheel gets the grease; sometimes it doesn’t. But folks need to challenge the decision-makers more fully with ideas, push them to consider the implications of proposed projects.”

In fact, says Tupper Thomas, executive director of New Yorkers for Parks ​— a nonprofit that has lobbied against so-called parkland alienation for more than a century now — one of the first vital steps for park supporters might simply be organizing.

“One of the things I’ve found the most shocking as I’ve worked in parks is how few cities have park advocacy groups,” Thomas says. “One of the most important things to do, even if you don’t think you have a problem, is to develop something.”

Even a small group, she adds, can be effective. A dedicated group can conduct basic studies and collect data (including research that already exists from national advocacy resources like the City Parks Alliance) and then use that data to talk to and lobby elected officials, she says. A group can also vet political candidates for their positions on park-related issues; it can apply for federal or state grants from entities like the Land and Water Conservation Fund; it can work alongside the city and communities to help ensure fair and thoughtful use of parkland; it can be a source of information for and allies with smaller neighborhood groups concerned about their own local parks.

Birnbaum also points to the role that social media can play in park preservation. Last year, when a proposed Frick expansion threatened to build over an adjacent Russell Page-designed garden, the ruckus raised in both social and traditional media platforms help boost awareness and engagement about the garden’s real cultural value, he says. The expansion plans were later scrapped.

“You have to reach across different arenas to all the groups who care about open space — the bikers, the birders, the landscape architects, the preservationists,” he says. “The challenge for all these groups is to educate decision makers and the public as to the value of that open space. Because once it’s gone, it’s gone.”

Join the next City Parks Alliance webinar, Saving Parks for People to learn more about the public trust doctrine featuring examples from New York and Chicago.