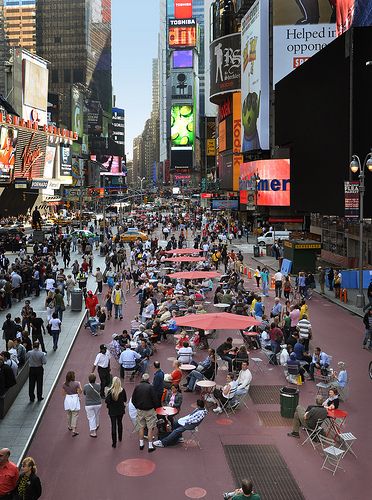 The good news we were all waiting for here in New York City was finally announced yesterday by the mayor’s office: the dramatic reimagining of Times & Herald Squares in midtown Manhattan from traffic clogged throughways to relaxed pedestrian plazas bordered by protected bicycle paths is going to be permanent. Even though the closure of Broadway between 47th and 42nd streets and 36th and 34th streets was completed back in Fall 2008, the past year has officially been a trial period, testing to see whether or not traffic travel times improved along 6th and 7th avenues. But while an improvement in motorist travel times was the alleged purpose of the program, it was clear from the start that Bloomberg and the DOT Commissioner Jeanette Sadik-Khan were more interested in a large scale experiment in livable streets. So, even though travel times in midtown improved slightly in some areas and even worsened in others, the administration was comfortable declaring the project a success and here’s why:

* Injuries to motorists and passengers in the project area are down 63%. * Pedestrian injuries are down 35%. * 80% fewer pedestrians are walking in the roadway in Times Square. * The number of people walking along Broadway and 7th Avenue in Times Square is up 11% and pedestrian volume is up 6% in Herald Square.

Perhaps most satisfying is the incredible support the project now enjoys among businesses in Times Square: 60% of Times Square workers, property owners and building executives support the redesign as do a whopping 70% of local retail managers. Back in 2008, the people raising the biggest stink about the proposal were the local business owners who somehow got in it in their heads that if people weren’t able to drive into their district, that their business would drop. This, of course, flies in the face of commonsense as pedestrian conversions like the new Broadway plazas increase foot traffic which, one would think (and studies have shown), would lead to more customers for local businesses.

Public opinion, which really was mixed at the start of the project, now falls overwhelmingly on the side of the redesign, with 74% of New Yorkers and 65% of people who live in the region support the new Times and Herald Squares. In the face of this success, other business districts in New York are clamoring for their own pedestrian plazas.

And for us livable streets activists, this may be the biggest victory yet. The Major is pulling no punches in his support for this project (and presumably similar future projects) by citing enhanced “livability and mobility.” Even when pressed by reporters in a Q&A session caught by StreetFilms that the ostensible goal of reduced travel times up and down 6th and 7th Avenues hadn’t been met, Bloomberg quickly countered: “Are the roads for multiple uses — everybody, pedestrians, bicyclists, and motorists, or are they just for motorists? In this day and age if you go around the world, all the other great cities have already tried to reduce the number of cars on their street and convert some of the open spaces into space for other people.”