Chicago’s One Step Closer to All-Seeing Sensors – Next City 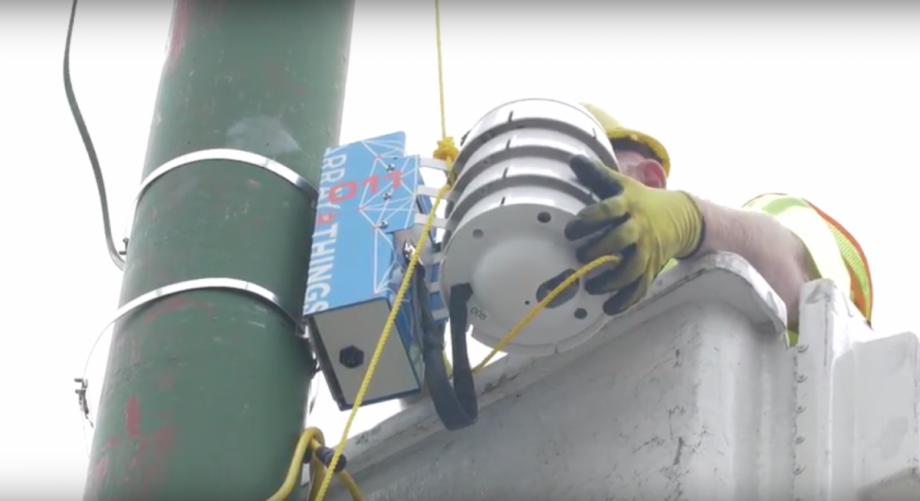 Last week, Chicago debuted the first two of 500 “fitness trackers for the city” — modular sensor boxes mounted on light poles that will collect data on air quality, weather, noise levels, vehicular and pedestrian traffic and other vitals. According to USA Today, the data they collect will go live and public by October. By the end of the year, 50 of the beehive-shaped nodes will be installed. Once all 500 planned nodes are live by 2018, they will provide the city and public with access to block-by-block data that could inform everything from Vision Zero planning to routes to school for asthmatic children.

The nodes are part of the initiative Array of Things, launched last year by researchers at the University of Chicago and Argonne National Laboratory, and funded by a $3.1 million National Science Foundation grant. As Zoe Mendelson reported for Next City last fall, the research team sought to install sensors in places where people were already interested in measuring vitals like air quality or pedestrian traffic, where a group of scientists were already studying the area, and where there already existed an “opportunity for change” — a place where the city of Chicago was considering investing or addressing a concern. Charlie Catlett, lead investigator of the Array of Things project, told Mendelson the team wants the project to be “more than just a sterile experiment” and instead “something communities can actually use.” The first two sensor boxes were installed at the intersections of Damen and Archer Avenues and Damen Avenue and Cermak Road.

Each 10-pound box is outfitted with sensors that can measure air and surface temperature, barometric pressure, light, vibration, carbon monoxide, nitrogen dioxide, sulfur dioxide, ozone and ambient sound intensity. Two cameras in each node will collect data on vehicle and foot traffic, standing water, sky color and cloud cover. To address concerns about surveillance, the researchers scrapped original plans to include a Bluetooth modem that would have tracked foot traffic by detecting the number of smartphones moving through an area. Researchers say the cameras will delete images within “tens of minutes,” after the information has been downloaded to a central system.

Brenna Berman, Chicago’s chief information officer, told USA Today that the city has immediate plans to use the data to guide decisions about bus service, and that it will use both vehicular and pedestrian traffic data to inform policy and infrastructure changes as part of its Vision Zero approach.

“Five years out, if we’re successful, this data and the applications and tools that will grow out of it will be embedded in the lives of residents, and the way the city builds new services and policies,” she told USA Today. “It will be viewed as a utility — the same way [we] view our street lights and the way we view our buses. They are there for us and they help us get through the city more easily. … They are just part of our everyday life.”

The public will also have access to that data through the city’s website. Berman envisions them using it to guide personal and community decisions. “For residents, the ability to have real-time information when you bike to school or to work and to choose the lowest pollution route, once all the nodes are up, is something we envision for the future,” Berman said. “What it means for the city is if we know there are pockets of poor air, we can work with environmentalists and community groups to improve air quality in those areas of the city that need that focus.”

The first-of-its-kind initiative is already under consideration for replication elsewhere. More than a dozen other cities, including Atlanta, Chattanooga and Seattle, may implement a similar plan.