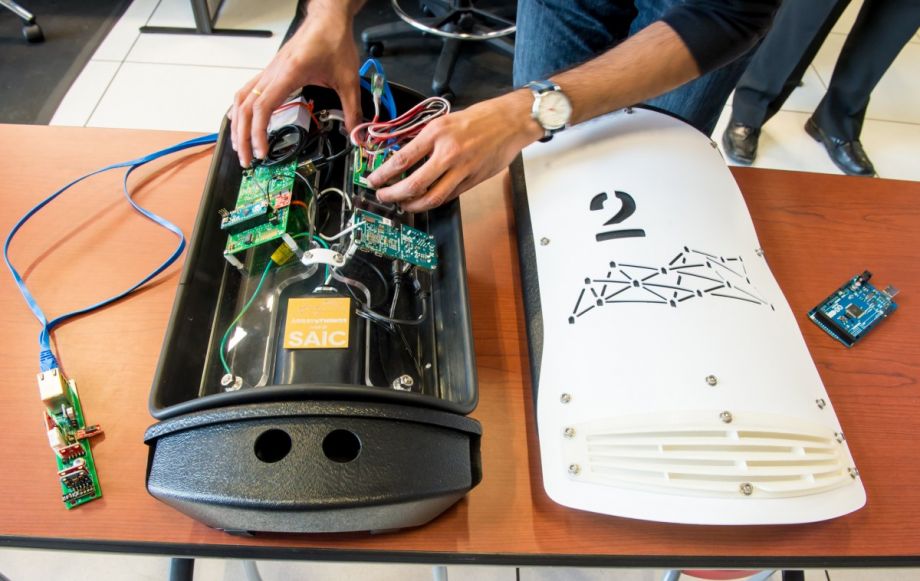 Array of Things began as a failed workshop for high school students. Three years ago, Charlie Catlett, director of the Computation Institute’s Urban Center for Computation and Data and senior computer scientist at Argonne National Laboratory, and fellow researchers were helping students assemble simple air quality monitors with the intent to deploy them in downtown Chicago to teach about collecting data in a major city. (The Computation Institute is a joint initiative between the University of Chicago and Argonne.)

“We had enthusiastic support from commissioners in the mayor’s office but it was practically impossible to find power, Internet access, and places to put the sensors where they wouldn’t be stolen or vandalized,” recounts Catlett. The students ended up bringing their sensors home and collecting data in residential neighborhoods, but Catlett still went to the city and proposed a network of devices that would support a large community of scientists and entrepreneurs.

He teamed up with Rajesh Sankaran, and Pete Beckman from the Computation Institute/Argonne, and Douglas Pancoast and Satya Mark Basu from the School of the Art Institute of Chicago and created the Array of Things. They’ve had 20 sensor nodes collecting data on the campus of the University of Chicago and a few up at Northeastern Illinois University since May. And last month they received a $3.1 million grant from the National Science Foundation as part of the national Smart Cities Initiative.

With the grant they will deploy nodes all over the city on public poles. They’re gearing up to deploy the first 50 early next year, 150 by the end of next summer, and 200 by this time in 2016. At that point they will stop to evaluate, and make any necessary changes to the internal components or external enclosures before deploying another 300 by the summer of 2017. The final goal is 500 nodes.

Each node contains multiple sensors, and the combination of sensors varies depending on location and what researchers wish to study (sound intensity, light, temperature, humidity, barometric pressure, vibration, air quality, etc.). And according to Catlett, that’s “not just generic air quality.” The sensors will specify gases like ozone and nitrogen dioxide and also specific concentrations that give clues to other factors in the environment like nitrous oxide from heavy trucks and particulate matter from combustion engines. “Generic only tells you good or bad, by sensing individual gases, we can get an idea of where each comes from,” says Catlett.

To find the most strategic locations in Chicago’s 234 square miles, the team looked for three things: 1) some important factor about that part of the city to the people who live and work there, like flooding, or air quality, or frequent pedestrian use — essentially they looked for things people already wanted to measure; 2) a pre-existing group of scientists studying the area; and 3) an opportunity for change — they wanted to find places where Chicago was already considering investing or addressing a concern. They want the project to be “more than just a sterile experiment,” says Catlett, and instead “something communities can actually use.”

The team foresees innumerable uses for the data that will be gathered. For example, it could inform the city’s implementation of traffic controls to improve air quality in certain neighborhoods, or response to problems like standing water and flooding (by providing rainfall measurements on a block-by-block basis).

And Chicago government will hardly be the only beneficiary. The data will be free and open, and the academic community will gain a great asset. Robert Jacob, Argonne computational climate scientist and Computation Institute senior fellow, plans to use the data to validate computer models of circulation and weather in the city. “We don’t currently have data at a fine enough resolution to do a good job of that,” he explains. He also believes the very existence of the data that Array of Things makes available will “generate more interest in urban weather and also urban planning in general in the academic community, but also among citizen scientists or just anyone interested in weather in the city.”

Kathleen Cagney, associate professor of sociology and health studies at University of Chicago, and the director of the Population Research Center, will use the data to study the density of street life, pedestrian and traffic patterns, and the intersection between the two. She’s trying to find out if the vibrancy of streets can depress crime rates or bolster emotional well-being. “Chicago is about small communities,” she says, “and the data we use often can’t get to that level of specificity. [Array of Things] will give us a much more fine-grained layer of our social and physical environment.”

The extent of design consideration that went into building Array of Things sensor nodes and their enclosures is astounding. They must withstand Chicago winters and also accommodate a lot of sensing technology, all of which need different placements — facing up or down, exposed to or hidden from air. To develop a container dynamic enough, the designers and scientists worked together closely.

But the most difficult design challenge, according to the team, has been the way the project is understood as a piece of community technology. Of course, with the increasing prevalence of sensors everywhere, there has been a corresponding public wariness about what may appear to be 1984-esque tracking. But Array of Things has gone to great lengths to specifically not be that.

“We started with the principle of transparency and openness,” explains Catlett, “and working backwards from that, we had to design devices that prevented the collection of information about individuals.” To achieve this, the team outfitted the sensor nodes with onboard microprocessors that allow them to use computer vision cameras to count people (or bicycles or trucks) and analyze data to send out without ever feeding or storing footage. Pancoast and his team even designed the installations to feel less creepy by making them large and mounting them at eye level, to be more visible and less mysterious.

But at the end of the day, understandably so, public sensing technology freaks people out. “People don’t understand this, so it’s required a lot of communication,” says Pancoast, “and that will be a permanent part of the project.”