U.S. Cities That Have the Most to Gain by Tackling Air Pollution – Next City

U.S. Cities That Have the Most to Gain by Tackling Air Pollution 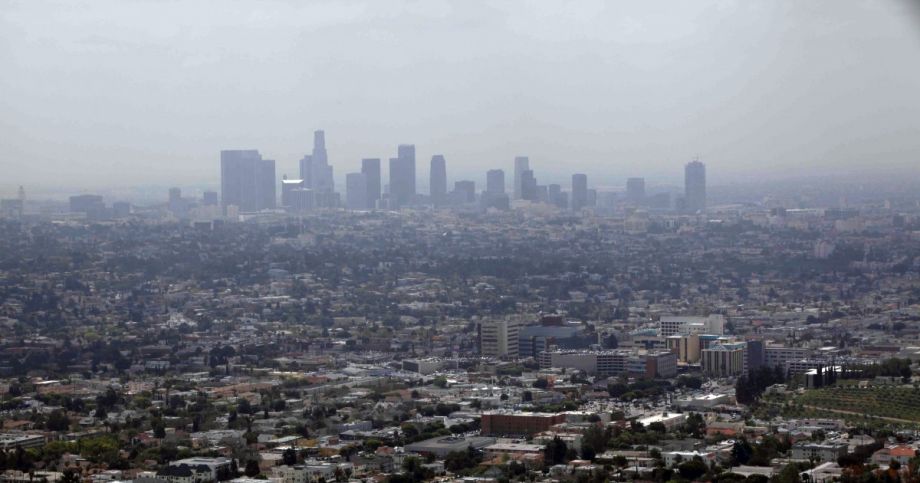 Smog covers Los Angeles, the U.S. city with the most to gain by reducing air pollution. (AP Photo/Nick Ut)

In the U.S., nearly as many people die every year as a result of air pollution as they do in alcohol-related car crashes: 9,320 compared to 10,076. According to a new study, those lives could be saved by tightening up air quality regulations just a little bit. Researchers at the American Thoracic Society (ATS) and Marron Institute of Urban Management at New York University found that reducing two types of air pollution — ozone and particulate matter — to levels below the Environmental Protection Agency’s current standards would not only keep people alive, but also avoid the risk of 21,400 serious health conditions.

The study breaks down the potential impacts city by city, to show where decreases in air pollution could result in the biggest gains in public health. A related searchable database shows whether cities are meeting the current EPA mandates and how many deaths and “adverse health events” could be avoided if those cities switched to the stricter standards that ATS recommends. Of the 483 counties with sufficient data on the topic, the study found that 14 percent did not meet the ATS’s recommended standard for particulate matter. Of the 715 counties with sufficient data on ozone levels, 91 percent did not meet ATS standards.

Los Angeles, Riverside (California), Pittsburgh, Phoenix and New York top the list for highest potential gains. Lead author Kevin Cromar told NBC News the cities that stand to gain the most are “those with the highest levels of pollution and the largest populations.” That is, heavily populated cities with moderate pollution would see more of an impact than small cities with higher pollution. 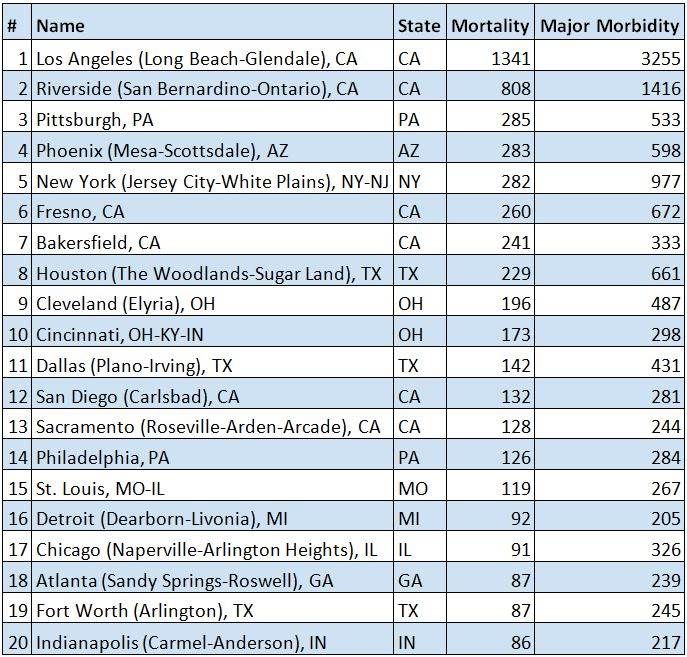 Another researcher said reductions will be most effective in places that have already made gains. Reducing air pollution by 5 micrograms in Los Angeles will go far, he said, since the city’s average hovers around 15. Beijing, where the average levels are four times higher, would see less of an impact from such a reduction. Other studies have estimated that as many as 4,000 people die of air pollution in China each day and as many as 3 million die worldwide every year.

Cromar also said that the best way to reduce pollution varies city to city. Philadelphia has looked to do so by investing in public and non-motorized transportation. Cromar cited New York City’s regulations limiting the amount of sulfur that could be in heating oil. Paris, Delhi and other international cities have instituted odd-even bans on vehicle use in city centers.

“The solutions need to be city specific,” he told NBC. “Even small improvements in air quality can have a profound impact on public health.”

Interestingly, the authors also told NBC News that in some cases rural areas experience worse ozone pollution than urban areas. Ozone levels tend to be higher east of L.A., for example, where “pollutants pile up against the mountains,” said one. A similar effect can be measured in Baltimore, where ozone is lower downtown than in the suburbs.