How California Can Kick Fossil Fuels by 2050 – Next City

How California Can Kick Fossil Fuels by 2050 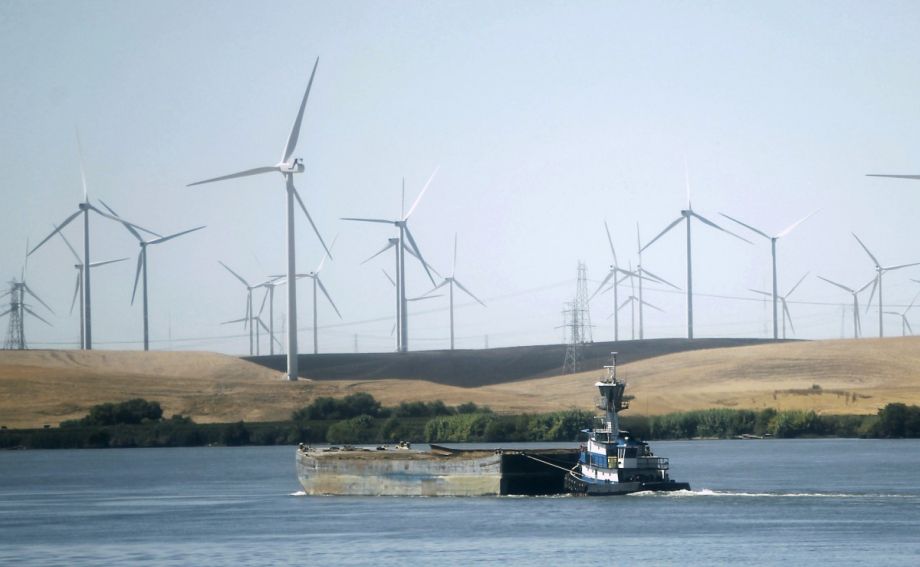 A switch to wind, water and sunlight could save California billions. (AP Photo/Rich Pedroncelli)

From Berkeley in the ‘60s to Silicon Valley today, California has long been known for its blissful utopians. Stanford professor Mark Jacobson’s recent study — outlining how the state can become completely renewable by 2050 — could easily be dismissed as just another California dream. After all, with car-centric infrastructure, a lobby-powered Sacramento and oceans of oil hidden deep in the Monterey Shale, the Golden State’s nickname often seems far too literal.

But Jacobson says his vision isn’t rose-tinted and that California can ditch fossil fuels — soon.

His confidence comes partly from the many benefits his team quantified. If California were to switch completely to a pastoral-sounding combination of wind, water and sunlight (WWS) by the established end date, the state would gain roughly 220,000 more 40-year jobs than it would lose, avoid about 12,500 air pollution-related deaths each year and save around $103 billion annually in health costs.

“It will stabilize the energy market and create jobs,” he says. “There’s very little downside.”

Jacobson has developed such plans for each state as part of The Solutions Project. For California, his paper outlines a detailed roadmap forward.

The state could be powered by a combination of solar fields, decentralized panels on rooftops, carports and garages, geothermal, and on- and offshore wind farms. Vehicles would be electrified and battery-powered, also sourcing from this renewable grid. In total, the structures to make this possible would take up about .9 percent of California’s landmass. To keep a stable supply, a combination of about 55 percent solar, 35 percent wind, and the rest from geothermal, hydroelectric and tidal sources is recommended.

A system-wide overhaul would of course be expensive — but keeping the grid and streets as they are would also rack up the bills. In fact, the paper notes that factoring in external costs like air-pollution illnesses and deaths, along with the worldwide toll of increasingly catastrophic climate change, “WWS technologies cost less than conventional technologies today.”

And that multiplies going forward. A WWS grid in 2050 would be significantly cheaper because natural generators — unlike fossil fuels — are free. And manufacturing and project deployment costs are expected to drop due to economies of scale.

Making a complete switch is “the only thing we can do, it has to be done and we really don’t have a choice,” Jacobson argues.

Mathematically he’s right. But between climate deniers, Congress and a slavish devotion to short-term GDP, U.S. politics still reflect a different reality — in which we do have a choice. We could also continue with business-as-usual energy policies, benefitting a few choice monopolies.

Which is why Jacobson chose to research each state’s individual potential.

“It’s more likely that something will actually happen in the states,” he says. The U.S. is just “too large a scale.”

But the old-guard policies of Washington also play out in California’s capitol. Two organizations fighting to make renewable energy a reality in 2014 testify to legislative roadblocks.

Susan Glick is a spokesperson for the Alliance for Solar Choice, a national advocate for rooftop solar.

“The main thing on our radar is preserving sustainable rooftop solar markets and net metering,” she says, adding that IOUs across the country lobby to undo policies geared toward such decentralization.

Take AB 327, supported by California’s Big Three “brotherhood,” PG&E, SDG&E and SCE, whose top-tier executives have a revolving door with regulators, assembly members, and the oil and gas industry. In its first incarnation, the bill sought to flatten rates, removing financial incentives to switch to alternatives like solar. (It was significantly amended in favor of solar advocates by the time it passed in 2013).

Bill Magavern, meanwhile, advocates for greener transportation with the Coalition for Clean Air. While subsidies are beginning to encourage plug-in and hybrid technology for personal cars, Magavern says the freight industry still has a long way to go. The coalition is currently supporting a bill to fund new transport technology (trucks, buses and off-road vehicles) from cap-and-trade revenues. And the hurdles are significant.

“In the capital we’re going up against the oil industry and other powerful polluters,” he says, as well as making friction with the trucking and distribution sectors and railroads, which, “aren’t as recalcitrant as the oil industry,” but still “play politics in a big way.”

“The people of California support continued progress,” Magavern says. “There are a lot of promising technologies, organizations and individuals trying to make a fossil-free future a reality.”