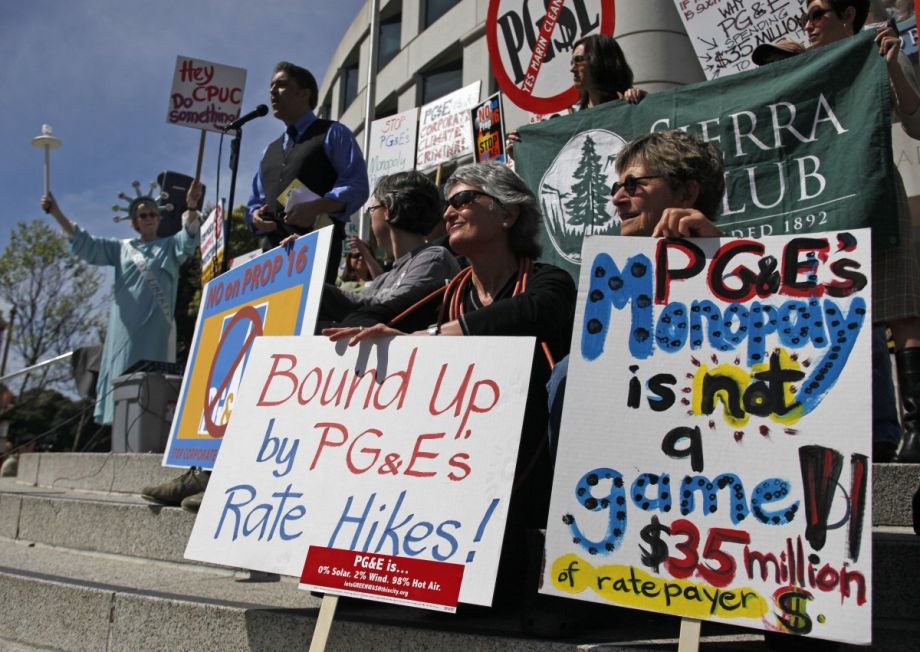 A proposed California law threatens clean energy start-ups, but you wouldn’t know that simply by reading it. Assembly Bill 2145 entered the state senate late last month on a platform of consumer protection. Its author, Assembly Member Steven Bradford (D-Gardena) writes in a press release that the goal is merely regulatory, and it’s full of mild, sensible-sounding language about transparency and rate forecasting. But a host of clean energy advocates, from the polite conservationists at the Sierra Club to the direct action die-hards at 350.org, say it’s not a consumer protection law — it’s a law to protect the state’s deep-pocketed utilities.

The start-ups discussed in the bill are called Community Choice Aggregators (CCAs), small public agencies with a burdensome name but an innovative premise. Basically these micro-utilities purchase electricity directly from suppliers instead of state-regulated monopolies (such as PG&E, SDG&E and Southern California Edison). California’s CCAs can still use the mega-utilities’ infrastructure — power lines, meters, etc. — but they have complete freedom to choose their suppliers and, more importantly, how their energy is produced.

Following cities in Illinois, Massachusetts and Ohio, municipalities across the Golden State are flocking to these unique entities as a way to meet clean air targets and switch to renewable energy. Marin Clean Energy, which includes cities in the Bay Area’s Marin County, Richmond and soon cities in Napa County as well, boasts a mix of at least 50 percent clean energy from solar, wind and geothermal sources compared to PG&E’s 22 percent. Sonoma Clean Power, which began operation in May, features 33 percent. Both boast cheaper rates than their big competitor. And groups in San Francisco, San Diego, Monterey, San Luis Obispo and a host of Silicon Valley towns are exploring the model as well.

The proposal that has sparked CCA outrage would change current law so that instead of opting out of enrollment (as is the case now), ratepayers in an agency’s jurisdiction must opt in. PG&E’s union, IBEW, writes on its website that under the existing model “customers could wake up one morning to find themselves getting power from a new supplier without having had any say in the matter.” It sounds like a necessary reform. On May 28th, the bill passed California’s largely Democratic Assembly with a wide majority: 51-15.

But the bill is not what it claims, says Jamie Tuckey, communications director of Marin Clean Energy. She takes issue with the union’s statement that MCE and other CCAs enroll people without their consent. Customers in a potential CCA’s jurisdiction are mailed two notices before an aggregator forms and two afterward, she says, and they can call Marin Clean Energy to opt out at any time.

But the larger issue, she says, is that a new CCA simply couldn’t form without an existing customer base. Assuming an entire city of busy adults — or even half of them — will take initiative and switch to a new clean energy provider just isn’t realistic, she says.

“We wouldn’t have launched,” she says, if the bill had been law when MCE formed in 2010.

She gives an example from California’s utility deregulation in 1998. Under a program called Direct Access, ratepayers were able to trade their power provider for whomever they chose. Only 2.5 percent of residential customers left their utilities. And factoring environmental zeal into the equation hasn’t helped. PG&E currently offers an opt-in program for renewable energy called Climate Smart. The percentage of people who have participated in that is much worse. According to the San Francisco Chronicle, membership peaked with 31,000 people in 2008, out of about 15 million, a percentage of .002.

Kate Kelly, public affairs director for Sonoma Clean Power, adds that the switch would have implications with both potential lenders and bidders.

“Without a credit rating or collateral (that is, customers to pay their bills) a CCA would not be able to purchase power,” she writes in an email.

“I think this bill is really anti-competitive,” Tuckey says. “I think it’s being spearheaded and pushed along by PG&E using labor unions to kill votes.”

Is she being paranoid? After all, the bill was authored by an independent assembly member, not a utility employee. True, Bradford did put in 12 years as a senior executive at PG&E’s brother company, Southern California Edison. True, he was the top Assembly recipient of campaign contributions from gas and electric utilities in 2012, according to MapLight. True, his top donors have consistently come from the state’s so-called “brotherhood” of utilities (along with general trade unions and oil and gas), according to the California Secretary of State website. True, the brotherhood’s revolving door between politicians and utility execs is so blatantly notorious that a senate committee convened to investigate it in May of 2013.

True, the private utilities have gotten itchy about CCAs before. In 2010, PG&E contributed $44.1 million toward the unsuccessful Prop 16, which would have required that any new funding for CCAs be approved by a two-thirds supermajority. True, while the exploding “No” campaign against AB 2145 includes dozens of organizations, few, other than PG&E’s union have so far come out in favor.

Maybe she’s being paranoid. A message left with the press coordinator at Bradford’s district office was not returned, so all we have is speculation. But this is California, and this is the energy market. As Richmond Mayor Gayle McLaughlin says, “This is about who has the power — literally.”