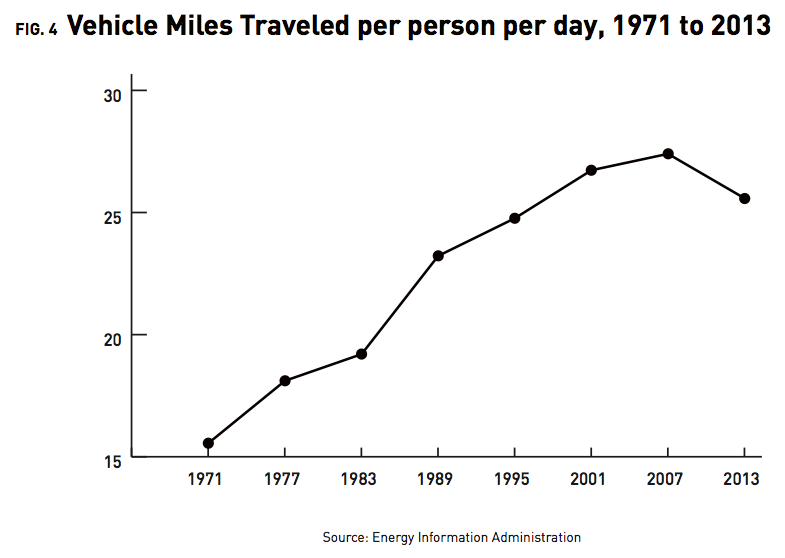 CEOs for Cities has released the third report in a series that seeks to put numbers to reforms the group favors for U.S. cities, from poverty reduction to boosting educational attainment. This latest report, titled The Green Dividend, focuses on the cost savings that come from driving less, which the study found could total $31 billion annually across the nation.

Specifically, it looked at the effect of commuters in the country’s 51 largest metropolitan areas driving just one mile less per day — in other words, a reduction of the all-important vehicle miles traveled (VMT) number by one point.

The authors explain their math:

The average cost of operating a typical vehicle — including fuel, maintenance, and depreciation — works out to about 50 cents per mile. (The actual figure varies depending on the size of the vehicle, its age, and fuel economy: larger and newer vehicles are more expensive to operate, and smaller more fuel-efficient vehicles can cost somewhat less). The total population of the nation’s 51 largest metropolitan areas is 168 million, a reduction of one mile per person per days is 168 million miles, and over the course of a year, this is 60 billion fewer miles. At a cost of 50 cents per mile, that reduction in driving works out to a savings of $31 billion annually.

This drop in VMT would have to be consistent across all of the metro areas, from the most compact (New York City and surrounding cities and suburbs, where per capital VMT is just 17 miles) to the most sprawling (Houston-Sugar Land-Baytown, Texas, with 37.7 miles per day).

In fact, based on the recent decline in VMT — something many thought was attributable to the recession, but which has persisted through the rebound — a reduction of 1 mile per person per day seems very likely in the near-term:

In each case except the Great Recession driving declines prior to the end of the recession, but as the economy rebounds, per capita driving increases. Driving increased rapidly following recessions in the 1970s and early 1980s, and also rebounded, though less sharply, following the 1991 and 2001 recessions. But follow the end of the Great Recession, per capital driving continues to decline. This is not a one-time event that can be explained by the recession — it is a decidedly new and different phenomenon.

CEOs for Cities runs down the ways to continue the trend — increasing mass transit options and walkability, beefing up cycling infrastructure — although it also points out that moving closer to jobs enables people to drive less without fundamental changes to land use and transportation patterns. (After all, despite the rising stock of many cities, the country’s fundamentally suburban nature has not changed in the years that VMT has fallen).

The full report is free for members of CEOs for Cities, or can be downloaded from its website for $15.