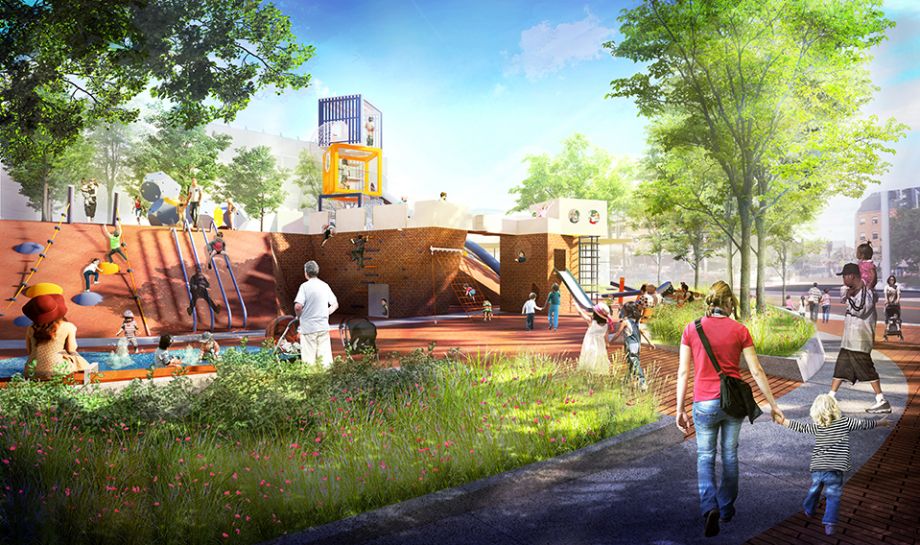 Boston’s City Hall Plaza, derided for decades as sprawling, barren, shadeless and singularly terrible and bleak, is at last heading toward a makeover. The design for the more welcoming “People’s Plaza” promises not only 21st-century accessibility, 100 added trees and improved infrastructure to better support large events, but a 12,000-square-foot “adventure playscape” that designers and city officials envision as a destination for residents from all over the city.

“A playscape helps attract and keep people of all ages near the heart of the city,” says Kate Tooke, a landscape architect with Sasaki, the design firm leading the plaza renovation.

“Cities everywhere have to redefine what city halls are about,” she says, noting that as more civic business is done online, fewer residents have occasion to come to City Hall on a regular basis. “The idea of programming a civic plaza with play is gaining traction.” San Francisco’s recently renovated Helen Diller Civic Center Playgrounds is an early example. In Boston, the playscape could make necessary slogs to City Hall more pleasant for parents with children in tow and could make the plaza an enjoyable respite for local and tourist families visiting historic sites in the city’s core..

Tooke’s team took note of Boston’s 2017 “Rethink City Hall” study’s recommendation of enabling “play for all ages” and ran with it. Far from a typical fenced-in playground with standard play structures designed more for safety than creative play, this will be “a destination playscape, where you can take risks and challenges. You can go straight up the steepest climbing wall,” Tooke says. The aim is to suit multiple ages and abilities, with features that will interest teens and engage and challenge people with disabilities.

In terms of design, the new playscape’s multi-level layout is designed to match the visual symbolism of City Hall and its plaza. Completed in 1969, the design of City Hall itself incorporated a vertical progression of materials mirroring Boston’s architectural history, from traditional brick to 19th-century granite to the upper floors’ 20th-century concrete. (City Hall itself has long been derided for its massive and drab “Brutalist” form, despite the fact that its design by Kallmann, McKinnell and Knowles was chosen from 256 competition entries and garnered critical acclaim and awards in its time. The building was once ranked by a travel site among the “top 10 world’s ugliest buildings.”)

The plaza’s design choices were meant to blend seamlessly into the building. “The original plaza was conceived as a ‘brick carpet,’ connecting Boston’s brick sidewalks to the brick floors inside City Hall,” Tooke says, “and the granite stair treads were to handle the steep grade.”

And when existing terrain presents a steep grade change, what does a playscape expert see? Climbing and sliding opportunities.

“Steps have been replaced by slopes and slides,” Tooke says. “We’ve taken the [brick and granite] pattern and reinterpreted it.”

Longtime mayor Thomas Menino in 2007 proposed demolishing or selling the property and relocating city services to the new Seaport District. Even current mayor Marty Walsh, now a strong force behind revitalizing the building and plaza, during his 2013 mayoral campaign floated the idea of selling off the 50-year-old building.

Ironically, Menino’s move to discard the building, while welcomed by some, sparked a surge of appreciation for the building’s embodiment of a 1960s vision and optimism for a “new Boston” and even for the concrete form itself. The threat of losing the building galvanized three local architects to compile a 336-page book defending City Hall and other 1960s-era concrete edifices and arguing for “Heroic” as a more apt term for them than Brutalist.

City Hall seems safe now from the wrecking ball, but the plaza remains problematic. Sasaki’s design presentation cites media quotes calling the plaza “bleak, expansive, and shapeless,” a “windswept desert” and a “howling concrete void.” It’s been an important gathering point for rallies, marches and victory celebrations for the city’s legendary sports teams, but the seven-acre plaza presents a vast, unwelcoming space pedestrians must cross to enter City Hall or to get from the Government Center subway station to key tourist attractions like Faneuil Hall.

As mayor, Walsh has pushed hard to enliven the plaza, crowdsourcing improvement ideas via a Twitter hashtag and ushering in a variety of popular uses, including public World Cup viewing parties, an annual Donna Summer Roller Disco Party, and a seasonal beer garden and food trucks. In 2016, the city hired hospitality company Delaware North to run a holiday market and ice skating rink.

Sporadic surface activation could only go so far, though. Beyond Delaware North’s difficulties with scant holiday vendor earnings and a dispute with a subcontractor, obstacles came from the plaza itself. A Ferris wheel idea had to be scrapped in part because the plaza rests atop a subway tunnel and can’t support the weight; the plaza lacks sufficient water and power access, lighting and drainage; steps make the plaza not fully accessible to people with disabilities.

The attempt to launch programming without renovations was a learning experience, says Patrick Brophy, the city’s chief of operations.

“We learned about how the plaza could be used, and how it had restrictions,” Brophy says. Without power access, event organizers need to use generators, requiring a fire detail, or run cable from inside the building, creating other safety hazards. For the skating rink, lack of water access was a problem.

“Every single time the Zamboni came out [to resurface the ice], it had to be filled from a Parks Department water truck,” Brophy says. “That’s a cost.”

The $65 million renovation will address many of these issues, Brophy says, with better water availability for everything from ice rinks to food festivals, multiple new “plug and play” areas providing power and internet access for concerts and events, and ADA-compliant ramps in place of currently tiered areas. A new civic pavilion next to the playscape will provide bathroom facilities. The shuttered north entrance will be reopened. The new playscape will add a permanent all-ages attraction to the plaza and the downtown area, joining another non-typical play area recently opened near the Children’s Museum in honor of 8-year-old Marathon bombing victim Martin Richard.

“The mayor’s vision is someplace where people will come, congregate, meet, and interact with the government — or not,” says Brophy. “We’ve had opportunities for art and concerts and the beer garden, and he thought, ‘What’s good for children? What brings parents here? We should think of a playground.’”

And when will children set foot on the new playscape slopes? The project is still in the design development phase, and while testing and infrastructure work are underway in the near-term, Brophy estimates the major visible new features won’t be complete until at least late 2021.

“I wish I had a magic wand to make it happen,” he says, “because I think it’s going to be really transformative.”