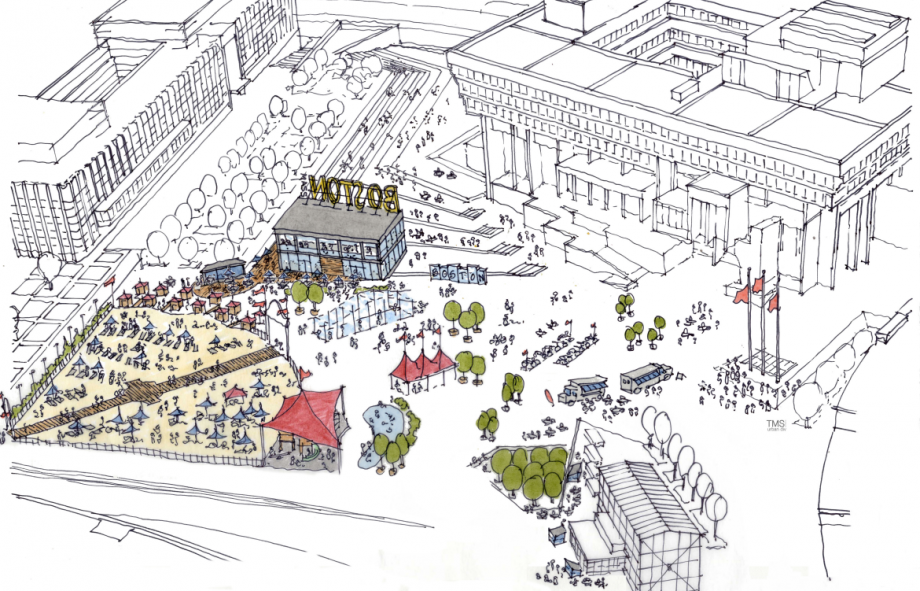 Boston’s City Hall Plaza, long lamented as a barren Brutalist blunder, will undergo a redesign by hospitality management company Delaware North, whose early recommendations for a more human-centric square include a two-story restaurant, multiple beer gardens, a 200-foot-tall Ferris wheel, and “the ultimate new selfie station”: a giant sign spelling, what else, “#BOSTON.”

The city has struggled to turn the massive, unadorned, shadeless plaza into something friendlier. Mayor Marty Walsh has made its transformation a priority, launching the initiative Rethink City Hall, which included installing an artificial front lawn last summer and inviting residents to tweet their ideas for an enlivened plaza.

Now, with Walsh announcing last week that the city has signed a three-year contract for the redesign with Delaware North — which owns the nearby TD Garden arena and runs the Rockefeller Center ice rink — Bostonians can see transformation in their future.

According to the Boston Globe, the conceptual plans include interactive art installations, a summertime urban beach, and a winter garden in the chillier months, complete with an ice skating track and hot cocoa. All of the proposals still require public input and city approval.

It’s also not entirely clear who will pay for the facelift. Boston has said no public money will be used on the project. According to the Globe, Delaware North said in its bid it would be willing to invest “upwards of $15 million” in enhancements, which it expects to recoup through a revenue-sharing deal with the city. Some of the proposed attractions would be free, and others available for a fee, resulting, the company estimates, in “significant annual cash flow.”

The company has also said it will seek corporate partnerships to fund the project. But it also cautioned that some aspects of the proposal would only be financially viable if the city commits to a contract longer than three years.

The company, which won the redesign bid over Anthem North and Biederman Redevelopment Ventures, tentatively plans to begin programming this summer, with construction on the winter garden and temporary restaurant structure slated to begin in October. If the Ferris wheel — sorry, the “iconic” observation wheel — is approved and funded, it won’t start turning until next spring.