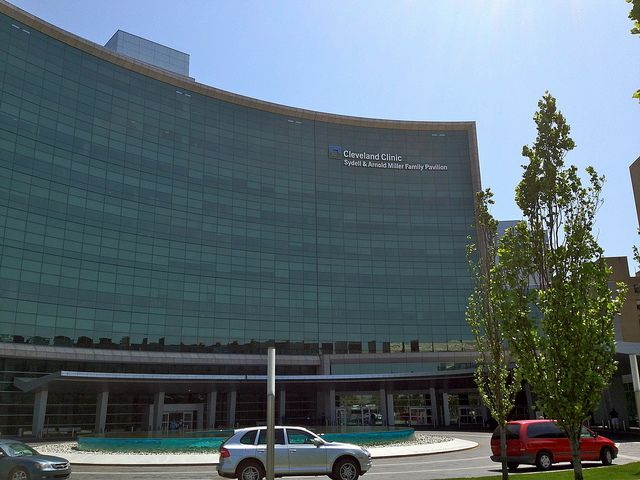 The Cleveland Clinic — think of all the purchasing power. Credit: Marc Buehler on Flickr

Hospitals and universities hold a lot of sway in communities.They spend more than $1 trillion a year and employ 8 percent of the country’s labor force. But sometimes the success of so-called “eds and meds” can have an undesired effect: Gentrification and subsequent displacement.

The Anchor Dashboard — a new 40-page paper and not, sadly, an interactive dashboard with fun renderings — is trying to change that. Courtesy of the Democracy Collaborative at the University of Maryland, the paper identifies 12 areas where anchor institutions can be more effective at the neighborhood level, from business incubation to local hiring.

“If you don’t do this work right, it can lead to the kind of gentrification that can blow a community apart,” said Ted Howard, executive director of the Democracy Collaborative.

Procurement is the most important and arguably easiest piece to shift through simple policy changes. And a more balanced and local procurement brings more jobs and dollars to a neighborhood.

I wrote yesterday about an executive order issued by Maryland Gov. Martin O’Malley that calls for state agencies to consider contractors that participate in accredited apprenticeship programs or hire in high-unemployment areas. The Anchor Dashboard puts an emphasis on allocating a percentage of procurement dollars to local minority- and woman-owned business.

Whether it’s a massive hospital or a university cafeteria, anchor institutions can make a better effort to, when possible, award contracts to local businesses. Hospitals and universities will often talk about the “regional” impact of their institutions without looking just outside their walls. If they make a concerted effort to engage with local businesses or hire local, they’ll see a direct return in the streets that surround them.

Cleveland’s Evergreen Cooperatives is a sterling example of how to tap into the purchasing and procurement power of local anchor institutions. Worker-owned businesses like the Evergreen Cooperative Laundry provide linens for Cleveland hospitals, hotels, restaurants and nursing homes. The Green City Growers Cooperative, an urban farm, sells its produce to local grocers and food-service providers.

I asked Howard about Anchor Dashboard’s goal. Does the Democracy Collaborative want it on the desk of every hospital CFO and university president? Will it eventually become a template for anchor institutions in cities?

“It hasn’t been done before, and we’re not saying these are the perfect measures,” he said. “It’s an attempt to set some standards by which these institutions can conduct their economic development efforts and in a way that we can ensure that it really is benefitting the community.”

The Anchor Dashboard is by no means a LEED certification for anchor institutions. There are no stringent rules. But it does offer up some smart guidelines that could help both the anchor institutions and the neighborhoods in which they reside.