A Few Points About the Mayors Challenge Winners – Next City

A Few Points About the Mayors Challenge Winners 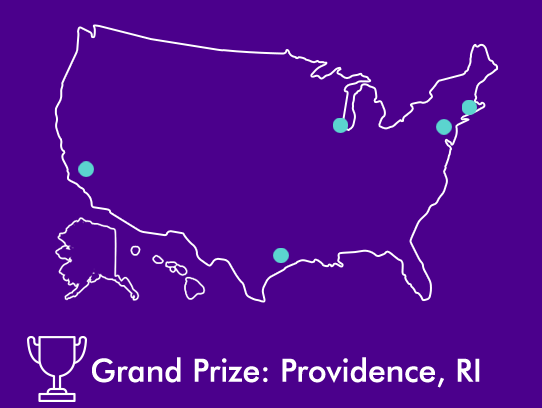 By now you might have seen that Providence, R.I. today won the Mayors Challenge, a national competition in which city governments vied for grant money from Bloomberg Philanthropies to put toward problem-solving projects.

Having kicked off last June, the Mayors Challenge — one of the most Bloomberg-like of all Michael Bloomberg’s pet endeavors — received proposals from more than 300 cities in 45 states before the field narrowed to 20 finalists in November.

The Providence proposal, which landed the $5 million prize, seeks to close what Mayor Angel Taveras calls the “word gap,” or the fact that children from low-income backgrounds are exposed to up to 30 million fewer words growing up than their counterparts from high-income backgrounds. By tracking the amount of words and phrases kids hear in their homes (the recording technology can phase out TVs, Taveras said, to zero in specifically on real-life conversations) Providence can use the findings to coach parents to expand their everyday vocabulary, thus improving that of their children.

The four runners-up — Chicago, Philadelphia, Houston and Santa Monica, Calif. — will each receive $1 million to put toward their own initiatives. More on these below.

One significant end goal of the Mayors Challenge was to find ideas that not only work in the city where they came from, but can be replicated elsewhere — a notion that prompted Bloomberg to call cities “America’s new laboratories of democracy” in a teleconference this morning.

To that end, here are three peculiar things Next City noticed about the contest’s outcome:

Three of the five winners (Chicago, Houston, Philly) are among the nation’s five largest cities. Santa Monica and Providence are situated very close to the other two.

New York City, mind you, was not allowed to participate. This isn’t to say that all the winning cities don’t have worthy ideas or couldn’t use the money. But the list of finalists included many smaller cities that normally don’t get the sort of attention offered by the competition: Such underdogs as Knoxville, Tenn., High Point, N.C. and Springfield, Ore., all far away from the Northeast Corridor and with populations well below 200,000. Their proposals respectively addressed improving the local food system, reducing domestic violence and revamping EMS via mobile primary care units.

A grant to the tune of $5 million or $1 million — paltry sums, as far as civic projects go — would have made a much bigger splash in cities like these than the actual winners. The Mayors Challenge may have sought solutions to perennial urban problems all around the country, but it ended up spotlighting the usual suspects. This likely has to do with larger, better-resourced cities attracting the bulk of talent to begin with. But it would have been nice to throw a few underdogs a bone.

The two popular poll winners have more concrete goals than the actual winners.

In addition to earning the runner-up grant, Houston’s idea — which seeks to let residents consolidate waste in one bin, and then extract recyclables from there — was voted fan favorite in a public poll. Milwaukee came in second in the popular poll, for a vacant property-to-urban agriculture concept. These are concrete strategies with clear goals: Houston Mayor Annise Parker said that the city hopes to raise recycling rates from about 30 percent to as high as 75 percent.

In contrast, the Providence proposal concerns itself more with research and education, while the other three runners up deal with data and process. Philadelphia hopes to create a system that streamlines procurement of goods and services and opens the process up to a wider field of entrepreneurs. Chicago hopes to build a comprehensive system for city data, while Santa Monica Mayor Pam O’Connor said her city will strive to create a first-of-its-kind metric that can measure well being among residents.

Maybe the open-endedness of the winning proposals was intentional, as it gives a city leeway to experiment and allows for varying definitions of success. And local leaders obviously crave as much information about their city as possible, hence the stress on data. But the public, as always, continues to look for hard-and-fast outcomes.

As a result of winning the public poll, Houston will receive an extra $50,000 grant from IBM and media coverage in the form of a front-page Huffington Post column every month for a year.

The winning proposal has a focus on equity.

In other words, it’s a refreshing departure from the sort of app-focused mindset that usually permeates urban-focused competitions. The runners-up deal more with topics that Bloomberg is generally known for: Philadelphia’s appeal to private entrepreneurs, specifically, as well as the Huston and Santa Monica initiatives focused on convenience and quality of life. Not that convenience and quality of life aren’t important, but for once the least immediately lucrative suggestion gets the most money, even if it isn’t very much.