Since the middle of the last decade, people have been traveling far less by car than they used to. NJPIRG/Frontier Group

Amid significant growth in transit commuting in New Jersey, rising CTTransit ridership in Connecticut, Metro-North’s recent gains and a 1.1 percent increase in ridership on the MTA’s subways and buses in 2011, transit boosters have another reason to cheer: A recently released report from the New Jersey Public Interest Research Group (NJPIRG) and Frontier Group has found that, since the middle of the last decade, Americans have been driving less and traveling by foot, bike or transit more. The trend, they found, is led by young people, age 16 to 34.

The report’s key findings are encouraging for transportation and sustainable development advocates:

NJPIRG and Frontier Group also suggested that the trend away from car dependency among young people would endure, even as the economy rebounds. Young people, they said, would likely continue taking transit, cycling and walking for a variety of reasons, including:

• Legal and financial barriers to car ownership • The high price of fuel • Improved technology, which eases the use of public transit (real-time bus tracking, for example) • Environmental and health concerns

The report also found that a majority of Americans, regardless of age, prefer to live in areas of “smart growth” (defined as places with a mix of single family houses, apartments and condos, with stores, restaurants, libraries, schools and access to public transportation). 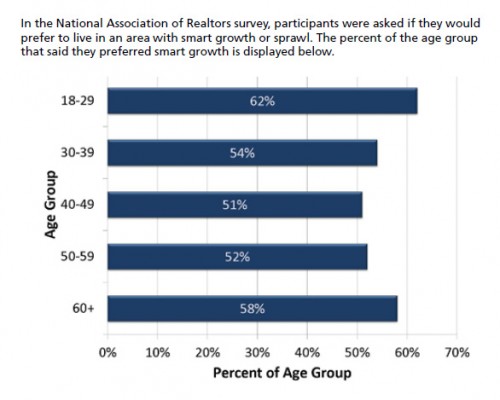 Clearly, Americans are demanding walkable, compact communities that offer a variety of transportation options, and reports from the New York metropolitan area bear this out. According to a recent poll, two-thirds of New Jerseyans believe that their state needs more walkable, sustainable communities; nearly three in four New Jerseyans said that they would definitely or probably like to live in such a community. In Connecticut, communities requested more than $13 million in transit-oriented development grants in 2011, although the state could only fund $5 million of them. In New York, the Lower Hudson Valley is crying out for public transit on the Tappan Zee Bridge. Now, more than ever, the region’s investment in transit, cycling and walking projects must keep pace with rising demand.