An expatriate Rotterdammer looks at regional identity and how a sense of local civic responsibility has taken hold of a generation of Europeans—even as the world grows increasingly globalized by the day.

David van deer Leer is a blogger for the BMW Guggenheim Lab. This story originally ran on the lab’s blog.
With research by Stephanie Kwai.

Citizenship can no longer be defined exclusively as rights and responsibilities related to the modern nation-state. Today, some refer to it as legal or economic status, whereas others refer to it as group, ethnic or cultural identity. For instance, I live in New York, but rarely see myself as a Dutch citizen, even though I technically am. For years, I convinced myself to identify as a European, which was frequently reinforced by my American colleagues, who often enthusiastically gave me their “Oh that is so European of you” response.

A little over ten years ago, with the expansion of the European Union and the introduction of the Euro, Euro-identifying was the zeitgeist among well-educated young Europeans. It allowed us to position ourselves as forward-looking international thinkers without identifying ourselves as global citizens, which was quite inconsistent with our social-welfare-state upbringing. En masse, we moved to Berlin, London and Paris. Not to be in Germany, England or France, but to be in; to have a life in these specific cities.

At present, I think that few of us would dispute our European-ness to the extent we did several years ago. It’s possibly a result of the current turmoil in the European Union, but I wonder if there’s a deeper reason. After almost six years in New York City and several years of intense international travel, I found that my fondness for European-ness had started to fade (well before last year’s Euro crisis). Our European zest was rooted in a time marked by writings about “global cities” (Saskia Sassen’s term), “non-places” (or “non-lieux,” coined by Marc Augé to describe transit hubs and other transitional places designed to be moved through or consumed, without leaving a trace of our engagement with them), and “flexible citizenship” (Aihwa Ong’s term for the ways modern technocrats and professionals navigate nations to select the best options for investments, work and family).

We lived with books by architects and sociologists celebrating the number of hours they spent in flight and the blankness of transportation hubs. I believe our inclination toward European-ness was strongly related to, and possibly masked by, these grand concepts that welcomed the loosening of national ties, while something arguably different was happening in the nodes that these global networks were connecting. 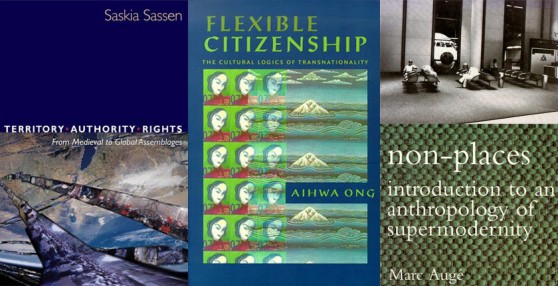 While the concept of citizenship shifted from nation to international region (something described as the denationalization of citizenship) during the 1990s and early 2000s, our daily experiences often moved in the opposite direction. We traveled to see cities; we moved to live in cities; we wanted to make these cities our own; and most important, we started to feel responsible for these cities. Our lives gravitated toward the metropolis, but blinded by the complex contemporary concepts, we didn’t recognize how this urban rearrangement was changing our understanding of citizenship. The people I grew up with hid (inadvertently or not) behind the veneer of their European-ness, while individuals from other corners used cosmopolitanism similarly. Both, however, never came with the same rights or responsibilities as we have come to know them today under the normative concepts of citizenship of nation and region.

Luckily, we have become increasingly self-conscious as urban dwellers and have started identifying as such more often. Looking back at my last years in Holland, I should probably admit that I secretly felt more Rotterdammer than I had ever proclaimed to have felt European, or Dutch for that matter. Without hesitation, I would put effort into making Rotterdam a better place through my work. On the contrary, I would be hard pressed to say the same about fighting for my country if asked.

These days I am at the point of daring to identify myself as a New Yorker. I love the freedom and opportunities the city provides and feel a genuine sense of responsibility to it as my own. I want to actively work to improve what I can through my projects, making me wonder if we should reposition the rights and responsibilities of citizenship more subtly (not to be mistaken as a revival of the Greek polis or Medieval city-states).

For many metropolitan areas today, city-state citizenship is a naïve goal—although I can’t help toying with the idea: New York as an independent nation? What is noteworthy are the types of rights and responsibilities that citizenship afforded in the old urban settlements, which may grant incredible insight for us today. Sassen alluded to this possibility in her book Territory, Authority, Rights, and it has been illustrated by the past year’s cultural uproar, echoed in metropolitan regions around the world. The benefits and eligibility of citizenship are becoming increasingly and effectively analyzed, questioned and altered by minority groups that find one another in the urban context and organize themselves, unafraid to speak up. I feel the 20th-century commitment to our countries of citizenship diminishing, but in its place, there’s an increasing responsibility to act within our direct communities to make our cities better.

John F. Kennedy’s historic 1963 speech in West Berlin comes to mind, where he mistakenly referred to a pastry while attempting to celebrate the freedom of the urban dweller embodied by the Berliner. In Kennedy’s use of the city, its inhabitants became the ultimate assertion of liberty with the intrinsic sense of associated responsibility, which seems to reassert its relevance today. I would not argue: “Ich bin (ein) Berliner,” but should perhaps make the leap and comfortably argue that I am a New Yorker.

▪ Is my intuition right and are we indeed becoming urban citizens again? Or better said, are we reinterpreting models of urban citizenship?

▪ Having grown up in Europe and now living in the U.S., I realize my point of view is probably rather Western. I wonder if similar shifts in the experience of citizenship were taking place during the 1990s and early 2000s in other parts of the world and to what extend the interpretation of citizenship is shifting there now?