Op-ed: The elements of Baltimore's model – inclusive outreach and partnerships, dedicated space for production and retail, and technical assistance for micro-enterprises to grow – are all key ingredients to building more economic opportunity for more people. 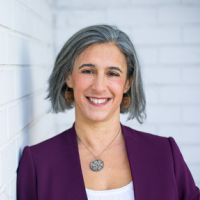 Nichole Sullivan, owner of Keppel & Kismet and a participant in Made In Baltimore's Home-Run Accelerator, sets up her product display at the program orientation weekend in May 2021 (Photo courtesy Made in Baltimore)

Entrepreneurship has been a key element of building personal wealth since the founding of our nation, yet access to entrepreneurial opportunities remains highly inequitable – with Black Americans having far fewer opportunities than white Americans. But Baltimore, a city whose population is 62.3% Black, offers a model for the nation for diversifying economic opportunity. It’s a model that should be recognized and scaled nationwide.

According to the Kauffman Foundation, new Black-owned businesses start with almost three times less overall capital than new white-owned businesses, and Black entrepreneurs’ loan requests are three times less likely to be approved than those of white entrepreneurs. And on top of that, according to Goldman Sachs research, the median Black household owns 90 percent less wealth than their white counterparts (and it’s even wider for Black women), meaning that Black entrepreneurs both have fewer resources in-house and through friends and family to launch and grow their ventures.

To address that web of entrepreneurial inequity, Baltimore has created a home-grown approach from which cities across the nation can learn. Its focus is on building economic opportunity by advancing small-scale manufacturing, making custom journals, jewelry and candles. That approach is vital, as small-scale manufacturers, unlike many older storefront businesses, sell their products online as well as in stores, giving them two sources of revenue, limiting their dependence on foot traffic, and helping to pandemic-proof the business, to a degree.

Six years ago, the City of Baltimore launched the “Made in Baltimore” program to grow the market for locally produced goods and support the people who make them. The City reached out to existing entrepreneurial organizations and individuals to build a network of local businesses that represents the city’s demographic diversity.

Now housed in the Baltimore Development Corporation, the City’s economic development arm, the organization launched in 2015 a popup storefront to showcase and sell local products and to provide opportunities for home-based businesses that could not yet sustain a storefront presence. Home-based businesses exist in cities and towns of all sizes nationwide, but the transition from home-based to storefront is largely ignored by economic development officials. Baltimore wisely made it central. The popup concept was then expanded for the holidays and remained in place for six months at a time, for a number of years, providing much-needed revenue to Baltimore producers, bringing in over $110,000 in sales in 2019 for businesses without their own storefronts.

At the same time, the City created partnerships with Open Works and Innovation Works. Open Works was founded in 2016 to rebuild Baltimore’s manufacturing economy from the grassroots up – one maker at a time. It is now one of America’s largest nonprofit makerspaces and supports 118 jobs. Innovation Works focuses on reducing Baltimore’s neighborhood and racial wealth divide by teaching and accompanying members of disinvested communities to build and own successful social enterprises that create sustainable neighborhood economies.

Baltimore also pursued private-sector investment, making newly renovated flexible manufacturing space available downtown. The 416,000-square-foot building – within a HUBZone, an Opportunity Zone, and an Enterprise Zone – offers entrepreneurs flexible space and support to scale their businesses. It is home to the Baltimore Innovation Center, an ecosystem of early-stage startups and growing businesses, and to Harbor Designs and Manufacturing, which works with startups, private companies, universities, and independent inventors to turn product ideas into production-ready blueprints and then put the products together right there.

Most recently, Made in Baltimore launched its Home Run Accelerator earlier this year, which provides technical assistance for home-based businesses to get ready to move into a storefront. It then provides matchmaking support with property owners who have space suitable for these businesses to move into retail settings – the right size at an affordable rate in a good condition.

Two Black-owned businesses that recently made the transition from home-based to storefront with support from Made in Baltimore are Cajou Creamery, a plant-based frozen dessert business, and Drama Mama Bookshop, which makes custom laser-cut notebooks, notepads, and journals. Both businesses moved in three stages from being home-based to selling products at farmers’ markets to moving to retail storefronts.

Andy Cook, executive director of Made in Baltimore, spearheaded this work and sees himself as facilitating a network of businesses, led by their needs rather than a formula imposed on them. That’s the key to the extraordinary success of Made in Baltimore and the reason that it’s such an important national model. It started with aggressive outreach to ensure inclusiveness, listened to the needs of locally owned businesses and startups, worked on creating the range of services that they need – especially flexible real estate options – and produced a strong and trusting environment of civic commitment to entrepreneurship.

The elements of this model – inclusive outreach and partnerships, dedicated space for production and retail, and technical assistance for micro-enterprises to grow – are all key ingredients to building more economic opportunity for more people in Baltimore. It is a model we can replicate in every city and town.

Baltimore is pointing the way for the nation. The United States is long overdue in addressing disparities of wealth nationwide. With Baltimore’s model, we have a vibrant pathway before us.

Ilana Preuss is Founder and CEO of Recast City and author of Recast Your City: How to Save Your Downtown with Small-Scale Manufacturing (Island Press, 2021).

Join 789 other sustainers such as: