Wisconsin Is Coming for Your City’s Millennials – Next City

Wisconsin Is Coming for Your City’s Millennials 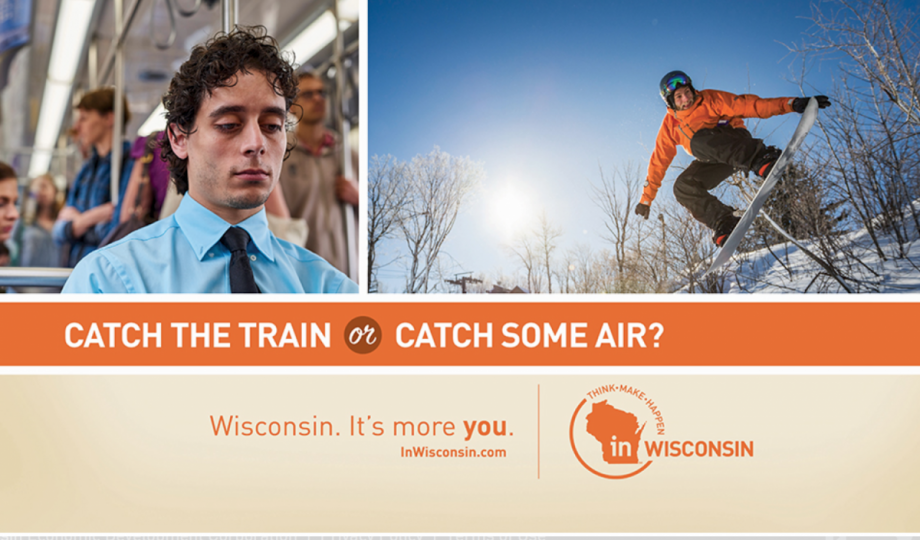 If you are a 21- to 35-year-old in Chicago, you shouldn’t be suffering through a long “L” Train commute — you should be paddle boarding on one of Wisconsin’s 15,000 lakes. That, at least, is the message of a new $1 million ad campaign from the Wisconsin Economic Development Corp. (WEDC) targeting Chicago millennials through exterior train wraps, posters in health clubs and Pandora audio spots. The ads contrast bored commuters with happy people playing volleyball and waterskiing and remind them that the average commute time in the state known currently for its farms and cheese is only 22 minutes, so if they move there, they’ll have plenty of time for other pursuits.

“We know from research that millennials in the Chicago market have told us their pain points are commute times and cost of living. … I think they will find a difference in those two aspects of quality of life,” Tricia Braun, chief operating officer of the WEDC recently told the Chicago Tribune. The ads are meant to be part of the state’s “comprehensive efforts to attract and retain talented workers in Wisconsin to meet the workforce demands of today and tomorrow,” according to the WEDC website.

The campaign is scheduled to run through June, but the Tribune reports that Wisconsin Governor Scott Walker is a big fan — likely due, in part, to the $10 billion Foxconn plant scheduled to go up in eastern Racine County. Walker has proposed another $6.8 million investment to expand the ads beyond Chicago to other midwestern cities, including Minneapolis and Detroit. According to the Wisconsin State Journal, the Assembly Committee on Jobs and the Economy is holding a public hearing on his proposal this week.

The state’s worker shortage predates the Foxconn deal, which Next City covered last year. In 2017, Wisconsin’s unemployment had neared a record low and with ever more baby boomers retiring, state lawmakers were getting nervous about what some have dubbed an impending crisis. They aren’t alone. As evidenced by Iowa’s state license plate tweak last August, states known for their rural economies are increasingly changing their images to appeal to young workers and their urban preferences.

But the Foxconn deal, which President Trump called a “great day for America,” will likely put an even greater strain on the state’s workforce, if it can’t import talent. That’s somewhat problematic, because the state offered the controversial company $3 billion in tax incentives over 20 years if it hires at least 13,000 workers. As Good Jobs First, a nonprofit that tracks government subsidies, pointed out when the deal was announced, Wisconsin taxpayers would be subsidizing Foxconn in exchange for the promise of jobs, but those jobs might not go to Wisconsin workers. With Walker’s proposal of an extended ad blitz, it appears that the state does, if fact, plan to bring in a workforce from outside its boundaries. And likely it needs to. But the taxpayers whose money is being used to entice Foxconn should probably be made aware of that.

At any rate, the Tribune points out that the Chicago-facing ads predate the Foxconn win.