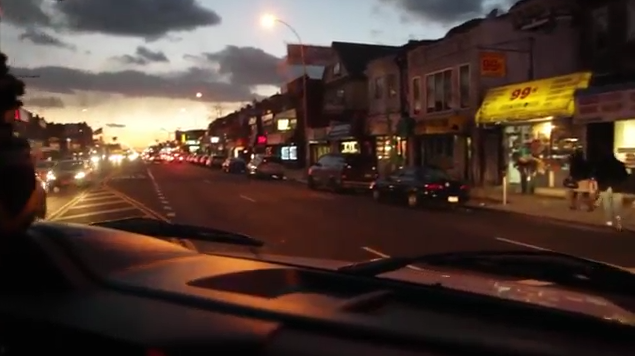 Hector Ricketts may be the original ride sharer. Ricketts owns Community Transportation Systems, a New York City fleet of more than 40 commuter vans. For the last 15 years, he has been fighting the city for the right to operate his vans freely, providing service in largely immigrant communities in his borough of Queens. But he is in the spotlight today as, to some, a hero in the battle to open up opportunities in public transportation to small-time entrepreneurs.

“I don’t think that anyone should go through the hurdles I went through,” Ricketts says in his Jamaican lilt when reached by phone this week. “Government should be embarrassed.”

Indeed, that’s the idea behind “No Vans Land,” a new 20-minute documentary-style advocacy piece that is making the rounds online.

“No Vans Land” is a the first in a series of videos said to be coming from Honest Enterprise, a filmmaking project on free enterprise under the auspices of the Charles Koch Institute, named for that high-profile libertarian billionaire. “This,” says the voiceover in the film, “is the story of a man with the vision to bring these people a better way to travel, and the courage to fight the powerful special interests who want to keep him out.” Subtlety isn’t what they’re going for.

Instead what they’re after is making the case that seemingly esoteric urban transportation regulations have human costs. So-called “dollar vans,” we’re told, offer cheap, safe, personalized slightly-less-than-mass transit. These are neighbors giving rides to neighbors, with varying degrees of formality. Some drivers are licensed. Others aren’t. (Ricketts’ are.) In New York City, 48 companies are authorized to operate commuter vans. They tend to work in “subway poor” areas and run down major corridors. The vehicles are often white, and range from nine seats to 20. If you’ve spent time in Queens or Brooklyn, you’ll know dollar vans by their honking.

Ricketts came to the United States in 1979 from the Caribbean, where jitneys are a way of life. He worked in public health and picked up his first van along the way: a blue 14-seater Ford. After he was laid off, he turned to vans full time. But the city, he says, fought him and others like him every step of the way. The city council would reject license after license — beholden, said critics, to the Transit Workers Union. In 1997, Ricketts and three other van company owners sued the city.

In 1999, the New York State Supreme Court ruled against the city council’s ability to restrict the entry of dollars vans into the market. But the court kept in place operational restrictions, such as on where passengers can be picked up and dropped off. That portion of the decision was appealed, but it was reaffirmed by the New York State Appellate Division. In 2002, the New York State Court of Appeals declined to hear the case. Robert McNamara is an attorney with the Institute for Justice, the Washington, D.C., libertarian law firm that brought the Ricketts case. “It had the unfortunate effect,” he says on a call, “of leaving these businesses in a legal limbo.”

And yet, Ricketts explains proudly in the video, “we see passengers and we move.” Advocates for dollar vans point out that the shuttles will, unlike a city bus, drop riders at their doorsteps, especially at night, and especially if they’re women. They’re sympathetic, fast, and, unlike MTA buses, aren’t stuck to a fixed schedule. And they’re cheap. At the time of the lawsuit, a ride on a city bus cost $1.50, and in the vans a dollar, earning them a name that has stuck even as prices have climbed.

But it’s their very flexibility that get dollar vans in trouble. Ricketts and other drivers complain that they’re always at risk of getting a ticket for driving on a street where buses run, picking up or dropping off passengers along the route, or not carrying a manifest of the passengers on board.

Because commuter vans are less regulated, critics worry about safety, pollution, access, and reliability. Union officials have called them “a cowards [sic] way out” of the city’s transportation woes. Allan Fromberg, a spokesperson for the New York City Taxi and Limousine Commission, said in a call that most of Ricketts’ complaints are either Department of Transportation issues or rules and requirements that the TLC inherited when New York State handed the city authority over commuter vans in the early 1990s.

“Schizophrenic” is how McNamara, the attorney, describes that sort of attitude towards dollars vans. Last year alone some 526 unlicensed commuter vans were seized. But the city has also relied on the vans in times of trouble, like during the post-9/11 Operation Free Transportation. (Then-Mayor Rudy Giuliani was a vocal fan of the dollar van.) Owners like Ricketts want New York City official to not just tolerate them when it’s convenient to, but treat dollar vans as a legitimate part of how New Yorkers get where they’re going each day. “What we’re dealing with is outdated regulations to protect established businesses from competition,” says McNamara, “and they’re having the intended effect.” Adds Ricketts, “if the marketplace wasn’t there, the vans wouldn’t be there.”

On the national political level, it’s worth briefly noting, the fight over the humble New York City is part of something much bigger: a bid to overturn the Supreme Court decision in what’s known as the Slaughter-House Cases of 1873. For the purposes of health and safety, it said, the state of Louisiana passed a law restricting butchery to a certain section of New Orleans. Critics called it a government-imposed monopoly, but the Supreme Court upheld it. The dissent was given voice by Justice Stephen Johnson Field. “In all these cases,” he wrote, “there is a recognition of the equality of right among citizens in the pursuit of the ordinary avocations of life, and a declaration that all grants of exclusive privileges, in contravention of this equality, are against common right, and void.” Ricketts v. the City of New York is just one of the latest fights to prove Field right.

“Hector’s story has been a good story for the last ten years,” says McNamara, the attorney, “and it continues to be a good story.”

What’s at stake is whether cities will let go of some control over public transportation, a part of city living that has, by tradition, been closed to outsiders. “It’s easy to look at transportation regulation in 2013 and think it’s terrible,” says McNamara, “but the only thing worse is what transportation regulation was like in the ’90s.” Indeed, the Ricketts case takes on new light in the context of current debates over ride sharing. Over on the conservative news and commentary site Hot Air, Mary Katherine Ham writes that “before there was Uber, there was Hector Ricketts’ Community Transportation Systems, Inc.”

With that in mind, I ask Ricketts if he has seen in Queens any competition from the rise of new app-based car sharing services.

“Uber?,” he says, “Is that the outer borough taxi service?”