Who Has the Right to Build Wealth in a Gentrifying Neighborhood? – Next City

Who Has the Right to Build Wealth in a Gentrifying Neighborhood? 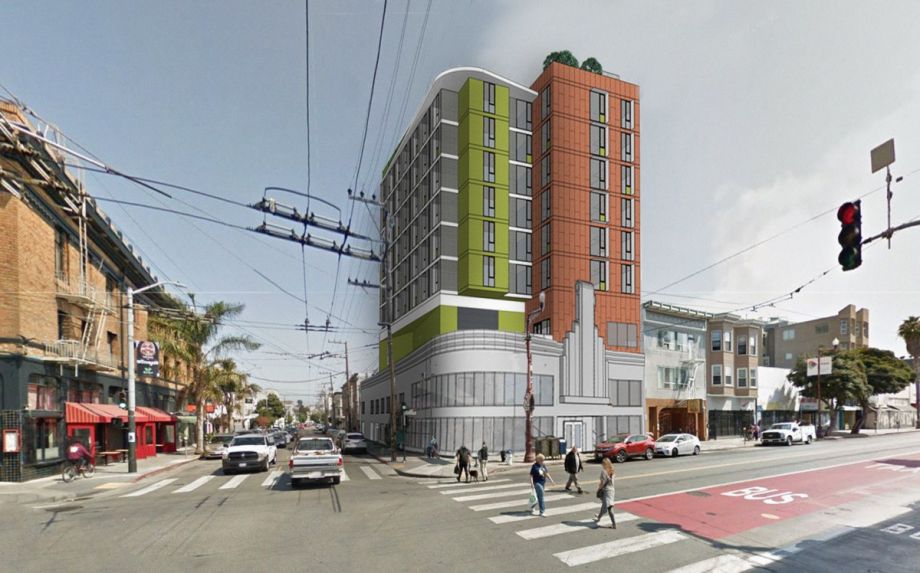 The 62 new condos at 18th & Mission will be the first affordable homes that Mission Economic Development Agency will sell to residents. (Since this rendering was developed, the project has added four stories to the portrayed nine.) (Rendering courtesy MEDA)

Karoleen Feng is going to build and sell 62 condos in San Francisco’s red-hot Mission District. But these aren’t just any condos.

They’ll be right at 18th & Mission, along the neighborhood’s historic Mission Street commercial corridor. According to the city’s most recent study of the corridor, the stretch of Mission Street from 16th to 20th Streets accounted for $64 million in retail sales in 2016, and grew 56 percent from 2007 to 2016.

As brand new condos in a planned 13-story building along a strong commercial corridor in one of the hottest neighborhoods in one of the hottest real estate markets in the country, these are opportunities to generate wealth out of thin air. But the question becomes, to whom does that wealth belong?

Certainly some of it would belong to the families who qualify to purchase those condos. But what about the rest of the community whose art and culture and food made the neighborhood the attractive corridor that it is? What about the rest of the city and the state and even the whole rest of the country? All their tax dollars helped finance the construction of San Francisco’s BART mass transit system, with stops at 16th & Mission and 24th & Mission — further contributing to the neighborhood’s status and monetary value.

Feng is no typical developer. She’s the director of community real estate at the Mission Economic Development Agency, founded in 1973 to support the neighborhood’s predominantly Latino and Latina working-class population. Since she came into her position in 2013, the organization went from zero to 1,212 units of affordable housing produced or preserved so far, with another 439 under construction.

Up until now, that’s all been rental units. The 62 new condos at 18th & Mission will be the first affordable homes that Mission Economic Development Agency will sell to residents. And they’re planning to use a shared-equity model, selling the homes at prices that are affordable not only to the initial homebuyers but to every homebuyer thereafter, as long as the building exists. There’s a lot still that needs figuring out, but the idea is for some of the wealth generated to accrue to the homeowners, while leaving the rest behind with the community for the next generation of homeowners. And if it works once, Feng hopes the organization will get to do it again and again throughout the neighborhood.

“If we can figure out this one,” Feng says, “other ones will make more sense.”

To help figure out how to make it work, Mission Economic Development Agency just joined the Community Land Trust (CLT) Accelerator Fund, a program of Grounded Solutions, a national network that supports models of inclusive housing across the country. Funding for the CLT Accelerator Fund came from Citi Community Development (which also provides funding for Next City).

Grounded Solutions has had two application rounds for its CLT Accelerator Fund so far, receiving 33 applications, four of which have been accepted into the program. Mission Economic Development Agency’s project stood out for being mixed-use, with residential above two community services spaces on the ground floor.

Meanwhile, there are an estimated 225 CLTs across the country, representing an estimated 20,000 rental units and 15,000 homeownership units. Communities typically turn to CLTs as a mechanism for permanently preserving affordable housing. Under a typical CLT, the entity acquires the deeds for each property, then leases or sells the buildings on those properties to developers or residents, with strict lease requirements to keep rents affordable or a mandatory resale formula that ensures each unit is affordable to the next homeowner. Each CLT is typically governed by a combination of CLT residents, other members of the surrounding community and at least one or two professionals in real estate or finance.

Mission Economic Development Agency isn’t currently planning to use a full-on CLT model, but some kind of shared-equity condominium model with deed-restricted resale formulas that protect affordability for families who come through the organization’s long-established first-time homebuyer counseling programs.

There are five or six basic models for resale formulas, Grounded Solutions’ Pickett says. A simple appraisal-based formula looks at the value of the home at purchase compared to the current market value.he family would have the right to sell at a price that includes only a certain percentage of the increase in value. Other formulas use area median income as a basis — looking at how much area median income has increased in the surrounding neighborhood, the homeowner gets back their original purchase price plus some percentage of the increase.

Which formula to use, and what percentages to use as part of those formulas, can depend on a great number of variables, Pickett says, including overall market conditions as well as the primary goal of the organization or affordable housing program.

Nearly all of that wealth was accruing to families at the lower end of the economic ladder, and a growing share of it is accruing to families of color. Ninety-five percent of homes studied in the working paper were priced affordably for families earning 80 percent or less of area median income. The majority of purchasers were first time homebuyers, low-income (51–80 percent area median income), in a female-headed household, in their late 30s, and employed in office, retail or service industries. The share of households of color purchasing shared-equity housing steadily increased from 13 percent pre-2001 to 43 percent from 2013-2018.

All that said, building wealth is not necessarily a primary driver for those who purchase a CLT home. A PhD candidate in environmental psychology at the CUNY Graduate Center in New York City, Claire Cahen was one of the working paper co-authors. On another multi-year project, funded by the National Science Foundation, Cahen has been working under the leadership of her dissertation advisor Susan Saegert on the first multi-city, multi-site academic study comparing the lives of CLT residents to the lives of demographically similar residents who live in conventional housing.

Cahen says becoming wealthy through property ownership was not a major priority for the CLT homeowners she’s helped survey in that study.

“Among CLT homeowners, [building wealth] was barely mentioned,” Cahen says. “People talked about building their lives, people talked about going back to school. People didn’t write so much about their next home or wealth building as comparing themselves to their friends who were tenants who had to move every year because landlords were selling their homes to whatever private market developer.”

Cahen says CLT homeowners saw the neighborhood as an asset, and one that should be accessible to everyone regardless of their income or net worth.

“[Living on a CLT] translated into people being able to reorient their lives into the things that make life meaningful,” Cahen says. “Spending time with family and friends. Having a garden. Having a job they enjoy, starting a business, or getting to travel a little bit, participating in their communities, feeling like their child was in a school that they were going to stay in for the rest of their education rather than moving every year.”

The CLT homeowners told the research team that if or when they leave those homes, it’s important for them that the home will be affordable for the next generation, and that they believe their neighborhood is not going to be torn to shreds by rapid development.

“A lot of the people grounded themselves explicitly in the idea that they were paying it forward,” Cahen says.

Feng is also planning for Mission Economic Development Agency to sell the ground-floor spaces to the early childhood education center and the dance and performing arts groups who are planning to occupy those spaces. Those will also be shared-equity arrangements, so that the organizations can accrue some equity in case they ever need to expand or borrow against the value, but won’t be tempted to sell their spaces to a corporate fitness center chain or high-end restaurant.

“There are a number of our member organizations who are looking at commercial applications of the CLT model,” Pickett says. But aside from some CLTs including primarily commercial properties along with residential properties in their portfolios, Pickett hasn’t seen examples of “high-density” mixed-use projects with residential units above community-serving owner-occupants on the ground floor.

Besides the commercial owner-occupants at 18th & Mission, another relatively new dimension for shared equity in that project is its capital stack. Feng is planning for Mission Economic Development Agency to use New Markets Tax Credits to finance the $60 million-plus total development costs.

Others have used New Markets Tax Credits to finance for-sale housing before, but Pickett is not aware of any shared-equity projects using the program.

“But I would say the cost of feasibility analysis and closing a New Markets deal is substantially more than just using some other more traditional subsidy resources,” Pickett says. “So you probably want to do that only with a larger project that justifies that cost.”

The 18th & Mission project’s capital stack has another relatively novel layer for shared-equity properties. To finance the acquisition and some of the predevelopment costs for the project, Mission Economic Development Agency combined a loan from the Low-Income Investment Fund with a small slice of capital raised from private investors in their community and broader network of supporters. They’ve gone to that network a few times over the past few years, and plan to formalize the structure this year and keep tapping that network as needed for future projects, including shared-equity properties.

“We know that this is something we want to do beyond this one building, and we want to get it right the first time as a model,” Feng says.