Oakland Community Hub Rallies to Save Itself From Gentrification – Next City

Oakland Community Hub Rallies to Save Itself From Gentrification 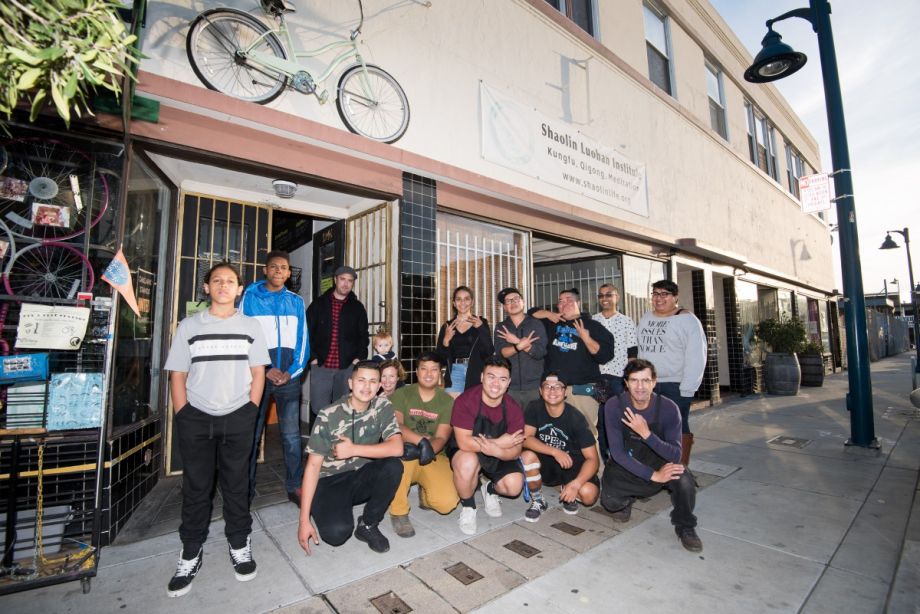 Tenants and members of community groups in front of the 23rd Avenue building in east Oakland acquired by its tenants in partnership with Oakland Community Land Trust. (Credit: Luba Yusim)

For seven years, Phoenix Mangrum had nowhere to call home. Living as a squatter, he moved from place to place, often sharing a room with others. Just last year, Mangrum, who works as a cyclist educator for Oakland-based bicycle organization Cycles of Change, finally signed a month-to-month lease for an apartment at 1232-48 23rd Avenue, in the same building as his workplace. The dream came perilously close to ending in less than a year. But it didn’t.

Mangrum is one of a handful of low-income residential tenants who, along with the social justice organizations located in the building, rallied to save their beloved home from the throes of Oakland’s gentrifying property market, sparing all of them from near-certain displacement.

“I don’t have any plans to move,” Mangrum says. “Sometimes I feel like I’m the luckiest man in the world!”

The two-story building in east Oakland is home to Peacock Rebellion — an activist group that runs performance workshops by and for Oakland’s queer and trans people of color — along with three other local grassroots organizations and eight residential units. Erected in the early 20th century, the building has housed community organizations for at least 15 years, according to Peacock Rebellion’s artistic and executive director, Devi Peacock. An adjacent lot consists of a community garden maintained by Sustaining Ourselves Locally, a social justice and food justice organization that also operates out of the building.

“A lot of community organizing in the neighborhood and across the City of Oakland happens there,” says Peacock, who founded Peacock Rebellion in 2012. “The building has been in community for years, but it has not been owned by any of the groups [that use it].”

Over the years, Oakland’s Rent Adjustment Program protected the building’s low-income residents from market-rate rents, though the program does allow landlords to increase residential rents by a certain amount each year. Meanwhile, like practically all commercial tenants, the four low-budget community organizations were not guarded by rent control. The building’s landlord, Ming Cheung, who owns the property and the adjacent lot, kept the rents stable, so that tenants could afford to stay.

So when, in January 2017, the tenants received an email from Cheung stating her intent to sell the building, they got very anxious about rent hikes. Fortunately, Cheung offered the tenants first dibs on purchasing the building. She promised to keep her valuable real estate off the market until as late as May 1, 2017.

Heartened by the news, Peacock met with his fellow organization leaders, along with the building’s residential tenants, to strategize about how they could keep the building and the properties out of the hands of a developer who would rather earn the highest possible rent without regard for the social and cultural significance of the building’s existing tenants.

“Our landlord … really wanted them to stay in community,” says Peacock. “So the conversation moved very quickly to, ‘We have to figure out a way to buy this building.’”

In search of a potential acquisition partner, the tenants contacted affordable housing organizations and banks, to no avail. Then they reached out to the Oakland Community Land Trust, a local nonprofit that currently owns about 20 other properties in the area. Only then did they realize that a community land trust model, built on the idea of preserving and stewarding properties for community benefit in perpetuity, was the best approach.

“It ended up being a good fit and mission alignment with what their vision was,” says the land trust’s executive director, Steve King, who worked with the tenants to acquire the real estate from Cheung.

Oakland Community Land Trust and the building’s tenants tapped multiple funding sources to secure the necessary money for the purchase.

Through a two-month online crowdfunding campaign, the tenants raised approximately $90,000 from more than 600 individual donors. With the land trust’s assistance, they also secured a $300,000 loan from the City of Oakland, a mortgage from the Northern California Community Loan Fund, and a grant from the Community Arts Stabilization Trust. Oakland Community Land Trust contributed approximately $350,000 in equity toward the real estate venture.

All told, they offered Cheung $1.5 million — $250,000 shy of her asking price, but close enough for her to accept (and still higher than the current assessed value of the property). The money raised also helped pay for mandatory building inspections, appraisals, and legal fees associated with the real estate transaction.

While community land trusts’ purchase of commercial-residential developments is not all too uncommon, the tenants’ solidarity and level of involvement in this venture was unique, King notes.

“The city and Northern California Community Loan Fund saw the urgency and the value the building had for the neighborhood and the occupants, and that was a huge boon to the overall project,” King says. “It was pretty magical, how it came together.”

The deal closed the week after Thanksgiving. Commercial tenants signed five-year,rent-stabilized leases with the option to renew twice.

As part of the deal, the tenants also came one step closer to realizing their dream of collectively owning the building. The tenants’ goal, Peacock said, is to purchase the building outright from Oakland Community Land Trust within 15 years, before their third and final five-year lease is up. In the meantime, the land trust staff will work to train the commercial and residential tenants in building management best practices.

As is customary with community land trusts, even after selling the buildings to the tenants, the trust will retain ownership of the land beneath the buildings, to ensure that the properties are preserved for community-centered uses.

“It is such an incredible feeling to know that this isn’t just preserving a queer, trans, people of color-centered space for the next 5, 10, or 15 years — we’re thinking about this for the next 100 years,” says Peacock. “When [these marginalized groups] are rapidly being displaced [elsewhere], to feel that we’re staying is a powerful political act.”

Last November 28th, the day the deal closed, one of the building’s kitchen sinks broke. The tenants’ reaction? “We cheered,” Peacock says, “because we were like, ‘Wow, this is our thing to fix now.’”