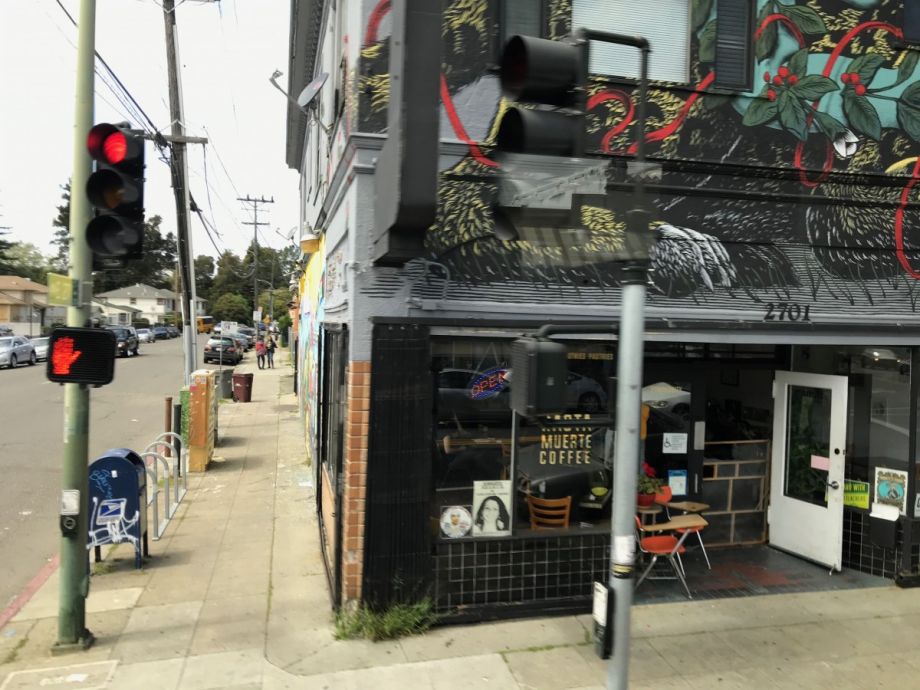 Matt Geraghty was listening to a broker sell him on the gentrification of Fruitvale, the largely Latinx neighborhood where he lives in East Oakland. He was shopping for a location to open a worker-owned cooperative coffee shop along with a handful of other Bay Area community organizers.

“The agent who showing us this space was just going on and on about how this was an up-and-coming area,” says Geraghty, who identifies as Latinx and East Indian. “They didn’t ask me if I lived here, they just kept saying ‘you have a restaurant, this is an up-and-coming zone, you’re guaranteed success because you have a lot of new young professionals moving here, it’s going to be the new Mission District,’” — referring to the San Francisco neighborhood known by some as ground zero for gentrification in the Bay Area.

Geraghty didn’t end up taking that space. But just a few months after Hasta Muerte Coffee opened its doors in a different location in Fruitvale, he and the other owners caught word through the internet that their landlord had put the building on the market. They had spent a year renovating the space on their own dime and making rent payments, and their landlord was about to sell the building. Their fate was once again uncertain.

“I cried a lot,” Geraghty says. “I kept going back and forth from being like, ‘we should just quit, this isn’t worth it, we’re obviously not going to get this, we don’t have the money so why even try?’ That was the hard end of it. The nice end of it was … our larger community really answered the call.”

Through a raft of clever tactics, the worker-owners of Hasta Muerte were able to acquire the building in partnership with the Oakland Community Land Trust, one of over 200 specialized nonprofit entities around the country created to protect community control over land. While the community land trust concept has roots in agricultural land, most today focus on residential properties. With Hasta Muerte, Oakland Community Land Trust stumbled upon a community-based financing model it now plans to use for acquiring other commercial as well as cultural spaces on behalf of community groups and cooperatives in Oakland.

“It’s changing the narrative on what it means to preserve communities and hold spaces, drawing upon communities themselves,” says Steve King, executive director of Oakland Community Land Trust.

Like most community land trusts created over the past few decades, Oakland Community Land Trust was established in 2010 to focus on residential properties. In Oakland, the idea was for the land trust to take ownership of foreclosed homes and sell them as permanently affordable homes for low- and moderate-income households. There were so many foreclosed or distressed properties in the aftermath of the financial crisis, the land trust’s founders thought banks would be falling over themselves to donate properties and get them off their books.

“That turned out not to be the case,” King says. “But at the time it seemed feasible and everyone thought it would happen.” Instead, private equity funds managing trillions of dollars on behalf of pension funds, foundations, university endowments and the uber-wealthy ended up buying most of those distressed properties and turning them into rentals for profit.

For the first five years or so, the land trust muddled through, aided by federal dollars through the federal Neighborhood Stabilization Program, which provided grants to community-based or community-oriented nonprofits to acquire foreclosed properties, rehabilitate them and put them back into service. The land trust was able to rehab 20 single-family homes and a few multi-family properties, a small bulwark against displacement of families.

Around 2015 or so, displacement started to seem like an issue for businesses, too. Tech companies, led by Oakland-based Pandora, started growing, or migrating to the East Bay seeking lower rents. But the venture capital-fueled tech companies and the businesses their employees preferred to patronize were willing to pay more in rents than established Oakland businesses.

“About three years ago all of a sudden there was this impending wave of nonprofits being displaced from Downtown Oakland,” King says.

On the commercial side of real estate, there wasn’t a Neighborhood Stabilization Program offering similar subsidies to save or preserve commercial properties.

Oakland Community Land Trust finally jumped into the commercial end of the pool last year, with the acquisition of a mixed-use building on 23rd Avenue in partnership with its tenants, which included commercial as well as upstairs residential tenants (see Next City’s previous coverage of that deal).

Although there are two residential units on the second floor of Hasta Muerte’s hundred-year old building, there wasn’t time to bring the tenants into the deal. Nor was there time to work through the city’s red tape to access subsidies for preserving affordable housing. The building was already on the market and the landlord (an overseas owner, according to King) had received an offer for around a million dollars.

The only reason Hasta Muerte and the land trust had stood a chance was because the worker-owners had negotiated a right-of-first-refusal clause with their landlord. Geraghty had first heard of such a clause through the housing co-op world.

“I just knew we were going to be putting a lot into the building, and we were negotiating a ten-year lease, so anything can happen in ten years and these folks don’t seem to want to spend a dime on anything that’s needed for this building,” Geraghty says. “I was surprised how quickly the landlord’s broker came back and approved that. I think it was maybe because the landlord just thought there was just no chance in hell we could really match any offer they would get anyway.”

Once the landlord did get an offer, the coffee shop worker-owners had three days to put down a $30,000 non-refundable deposit, then just 45 days to cobble together the rest of the money they needed to match the offer.

It was intense, with weekly meetings and the land trust constantly re-drafting financial feasibility spreadsheets. They raised $50,000 in donations through a crowdfunding campaign. The land trust threw in around $250,000 in cash equity — dollars that came originally from a $2 million grant by an anonymous donor through the San Francisco Foundation. Early on they were thinking a bank loan could cover part of the deal, but the approval process would take too long.

The last $600,000 or so would need to come from the last possible source they thought they could tap in time for the 45-day deadline — a private offering to community shareholders. There are online platforms for public offerings to invest in real estate, like Fundrise or Small Change, that allow developers to raise capital from investors who may need to be of a certain level of wealth to qualify. Would-be fundraisers can also go it alone, like the recently opened Community Foods Market in West Oakland. The private offering route is the easiest and the quickest, requiring the least amount of documentation and financial disclosures.

Hasta Muerte took the lead on finding and courting investors. “The strategy was more personal at first, reaching out to personal networks through email and phone calls,” Geraghty says.

The donors to their crowdfunding campaign were their first contacts. Not everybody has sufficient cash or a willingness to take a chance on such an investment, but everyone in someone’s network is a part of some other network, and word travels fast. Someone at a local nonprofit told a business owner, who told more business owners they knew, and soon Geraghty found himself sitting across a Hasta Muerte table from a local couple he’d never met before.

“I sat down with them for 20 minutes, they had some specific questions about finance and stuff, and I was able to answer,” he says. “They committed the next day to a $200,000 investment.”

Notoriety — or solidarity, depending on who you ask — also helps. A few months prior, word had gotten out to international media that Hasta Muerte refuses to serve uniformed police officers as a policy because an officer’s presence could compromise the physical and emotional safety of its customers, many of whom are people of color.

“I think there’s definitely a general sentiment of support for projects that are trying to hold space in a time of gentrification for communities,” Geraghty says.

In the end, some 22 investors chipped in. The investors got the option to set their own interest rate, between zero and four percent annually over the five-year term of their investment. A majority of the investors choose zero percent, according to King, with the rest ending up somewhere between two and four percent — blending into about one percent in interest paid for the whole $600,000. Those are much more favorable terms than they’d get from any bank, and since the sale went through last summer, Hasta Muerte is now paying less in interest to investors than they had been paying in rent.

As with most community land trust properties, Oakland Community Land Trust will retain the title to the property while providing a long-term, affordable ground lease to the coffee shop and perhaps the tenants above as cooperative owners of the building. For now, the land trust and coffee shop jointly own the property, but they have time now to figure out what cooperative ownership with both residential and commercial tenants could look like.

“I don’t take for granted being able to partner with another group who had a clear overlap in values with us,” Geraghty says of working with the land trust.

Meanwhile, Oakland Community Land Trust is already in talks to acquire properties in partnership with food co-ops, an arts organization, and a group of black-led organizations looking to co-locate. King says they anticipate using a private or maybe public offering to pool community capital into one centralized fund that can work across all these and more projects at once, instead of raising capital on a project-by-project basis.

“It’s so much work to do,” King says. “Every project we’d have to re-invent the wheel each time. We need a sustainable ecosystem where we can do this work and have some predictability on financing.”