What Should Replace San Francisco’s Interstate 280? – Next City

What Should Replace San Francisco’s Interstate 280? 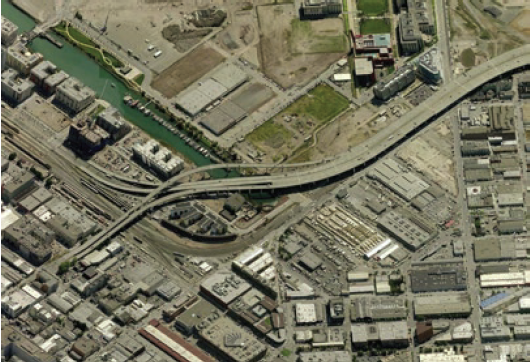 The stub end of I-280 in San Francisco. Credit: SPUR

Back in January, San Francisco Mayor Ed Lee floated the idea of removing the stub end of a highway that juts into the eastern side of his city, clearing the way for both a whole new neighborhood and high-speed rail service. Now, the Center for Architecture and Design wants ideas for what to do with the parcels of land that would open up should the removal eventually take place.

Interstate 280, a 57-mile road that wraps around the southern end of the Bay Area, terminates in San Francisco, where its eight elevated lanes split the neighborhoods of Mission Bay and Potrero Hill. It’s an industrial part of town, with a 19-acre rail yard for the Caltrain commuter system lying beneath the interstate’s entrance and exit ramps.

Yet as this San Francisco Chronicle editorial makes clear, many have described this area of the city using every developer’s favorite qualifier: “up and coming.” Which means there’s likely a higher and better use for the land than asphalt and sleeping trains.

Lee and his chief transit planner, Gillian Gillett, envision a slimmed-down highway stub that ends on 16th Street instead of about 2,000 feet north, where it currently feeds into King Street and 6th Street. Taking down this final stretch of I-280, coupled with moving the Caltrain yard, would mean an opportunity to develop a whole lot of housing based around transit, preferably a new high-speed rail line.

SPUR, a San Francisco-based urban advocacy group and Next City content partner, came out with a long analysis of the potential teardown in the June issue of its publication, The Urbanist. The three ideal outcomes, according to the team of authors that includes Gillett, SPUR staff and five people from AECOM, would be:

Naturally, the yet-to-be-fleshed-out concept leaves many questions up in the air. And as Providence, R.I. learned after it rerouted a highway out of its own downtown, there isn’t always agreement on how to best use the land that frees up for construction after such an operation is complete.

That’s why the Center for Architecture and Design in San Francisco is holding a design competition on ways to use the space beneath I-280 that Lee has targeted for removal.

Competition participants are invited to submit concepts for public art, buildings, landscape treatments, public amenities and infrastructure, or other urban design interventions that are made possible through the replacement of the elevated Highway 280 north of 16th Street with a surface boulevard. Suggested areas of focus are the parcels of land freed up by this transformation, especially along the western edge of Mission Bay, as well as the open space/landscape opportunities at the west end of Mission Creek to unify both sides of the creek.

(Disclosure: Next City is a media partner for the competition. SPUR is a co-sponsor.)

Highway removal in San Francisco is not without precedent. Following a 1989 earthquake that damaged the elevated Embarcadero Freeway, city officials opted to tear the structure down instead of repairing it. The result: An inviting six-lane boulevard along the city’s eastern waterfront flanked by bike lanes and 25-foot-wide sidewalks. A February 2012 report from the Institute for Transportation and Development Policy has a good rundown of the history and aftereffects of the Embarcadero removal.

Halfway across town is another boulevard where yet another highway damaged in the ’89 quake once stood. Octavia Boulevard replaced what was known as the Hayes Valley portion of the Central Freeway, a spur off of I-80. Then-mayor Jerry Brown closed this unsafe part of the Central Freeway in 1992. A decade later, it reopened as a landscaped boulevard that accommodates pedestrians and cyclists as much as it does cars.

Is San Francisco ready for a third highway-to-boulevard conversion? One factor that distinguishes the I-280 scheme from these previous local highway removals is that the instigating factor isn’t structural damage, but the desire of a mayor’s office to reconnect neighborhoods long isolated from one another due to an outdated piece of infrastructure — or, depending on whom you ask, to make the city a lot of money from massive new development opportunities.

Maybe both reasons are valid. Either way, the deadline for entries to the design competition is July 31.