Waterfront Streetcar in Brooklyn and Queens Is a Big Idea, But Is It the Right One? – Next City

Waterfront Streetcar in Brooklyn and Queens Is a Big Idea, But Is It the Right One? 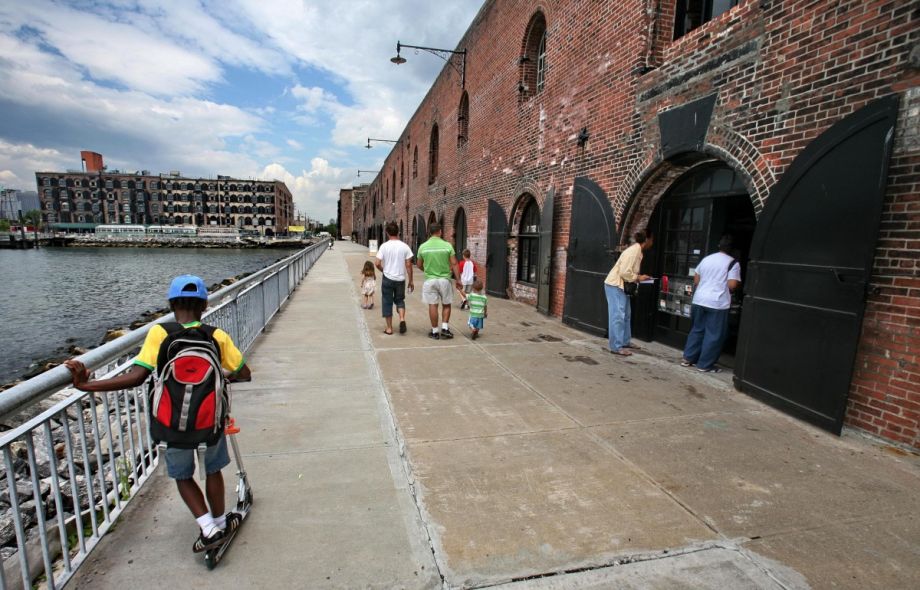 A proposed streetcar line would connect waterfront destinations like these refurbished warehouses at the foot of Van Brunt Street in Red Hook. (AP Photo/Bebeto Matthews)

New York Times architecture-turned-urbanism critic Michael Kimmelman has a new transit idea for the city: Build a mixed-traffic streetcar along the Brooklyn and Queens waterfront, connecting waterfront neighborhoods from Red Hook in Brooklyn to Astoria in Queens.

The proposal is a take on an older idea, put forward by urban planner Alex Garvin, for a light rail line connecting the same neighborhoods. There is an easily-graspable logic to the idea – the subways don’t reach the waterfront, where there is a lot of new construction and some existing housing and jobs. Kimmelman speaks of the “desire line” for travel between the neighborhoods, and proposes the streetcar as a solution:

A few Brooklyn and Queens residents may like their inaccessibility, but transit is about more than getting around. It maps a city’s priorities, creating a spine and a future for neighborhoods. It’s about economic as well as social mobility. So while Mayor Bill de Blasio continues to refine his agenda, including that promise of 200,000 units of affordable housing, he might consider a streetcar connecting Red Hook to Astoria.

Kimmelman is right that transit maps a city’s priorities. Given that, it’s fair to ask if Mayor Bill de Blasio’s priority should be new infrastructure that caters disproportionately to the gentrifying crowd on the post-industrial waterfront.

Yes, there are families of all economic stripes making homes in Red Hook, Williamsburg, Astoria and all the areas in between. But are they looking for a way to travel to other parts of the waterfront, or would they prefer a quicker alternative to the existing bus routes, like the B61 and B57 in Red Hook, which connect them to the inland parts of the boroughs and the city more generally through the subways, with the lion’s share of jobs and destinations? Meanwhile, there are countless parts of the city far from the waterfront that are more genuinely in need – the same parts of the city that accused the Bloomberg administration of neglect with projects like the 7 train to Hudson Yards or high-rises on the waterfront, and which served as de Blasio’s base of support.

On a logistical level, the waterfront line falls flat for one fundamental geographical reason: You cannot effectively connect waterfront neighborhoods in Brooklyn and Queens to both each other and the subway. Brooklyn’s subways are not on the waterfront, so a line that runs strictly along the East River will be essentially useless to the vast majority of travelers, as is the Brooklyn segment of the route that Kimmelman outlines in his column (which someone mapped onto a Google Map). Subways are manna for ridership on intersecting buses, and a lack of transfer opportunities is a fatal flaw in any route. An inland route, on the other hand, would connect people to subways, but wouldn’t serve the transit-starved waterfront areas that it’s intended to help. Zig-zag back and forth between the water and the subways, however, and you violate an essential rule of transit planning, which is that straighter is better – the resulting route would be too slow and unreliable to serve anyone well.

The Queens segment of the route outlined would perform a bit better than the Brooklyn leg, running through more populated parts of Astoria half a mile inland. But even here, bus ridership – the best proxy for future rail traffic – is weak compared to other less trendy parts of the boroughs. What is the logic in investing a billion or more in upgrading a moderately-trafficked bus route in Astoria before far more heavily-traveled routes in neighborhoods like Flushing and Elmhurst? It’s hard to discern any motivation beyond the fact that existing high-ridership routes like the Q44 or Q58 simply don’t pass through gentrifying areas.

Indeed, for all the hype about the Brooklyn and Queens waterfronts, their job and housing densities pale next to those in other more densely-built neighborhoods, and there’s vastly more demand for access to the rest of New York from these neighborhoods than to the few other areas on the waterfront, as existing bus travel patterns indicate. The western edge of Brooklyn and Queens could use better transit, but the only practical way is with short, shuttle-like bus routes to the closest subway stop, with trips smoothed by bus lanes in places like Red Hook and Astoria where the ridership might merit it.

Kimmelman’s twist on Alex Garvin’s original plan also manages to make the idea an even trickier sell on the ridership side. In a nod to concerns about removing traffic lanes used by cars, he proposes a streetcar that runs in traffic with other cars and trucks, instead of as a light rail line with its own separated right-of-way. He says that putting transit in its own lane would “create an obstacle” to the waterfront, and sacrifices a speedy route in the face of motorist opposition that is, at this early stage, more imagined than real.

Then there’s the issue of cost. Kimmelman called up a company without any experience building modern lines in the U.S. and got a quote of $241 million for the full 11.4-mile line, which even he doesn’t believe. It’s hard to say how much surface rail in New York City might cost since we haven’t built any in a century, but given the out-of-control costs of subway and main line rail lines, it’s hard to imagine a waterfront line coming in at anything under $1 billion.

While a waterfront light rail line (much less a streetcar) doesn’t make sense from a transit perspective, it is very popular in certain real estate circles. Dan Doctoroff, Bloomberg’s development czar and mastermind of the ailing redevelopment of Hudson Yards, has been touting Alex Garvin’s light rail plan recently. And Doctoroff’s counterpart in the de Blasio administration, Alicia Glen, also seems to like it, tweeting “Love big ideas,” with a link to Kimmelman’s streetcar proposal.

But even as a tool to spark development – Kimmelman calls his proposed streetcar “development-oriented transit” – the line is questionable. Developers are already desperate to build on the waterfront, submitting applications for projects that vastly exceed current zoning limits in neighborhoods like Williamsburg and Astoria. A streetcar hardly seems necessary to get developers to build in what is already such a hot area.

While enthusiasm for this sort of idea is to be expected of someone like Dan Doctoroff, it’s a bit more troubling to hear it from Glen, who serves in a progressive administration, or Kimmelman, touted as the people’s critic when he assumed his position at the Times. The waterfront streetcar line is the transit equivalent of the starchitecture that Kimmelman was supposed to deemphasize, and the luxury development that Glen is trying to move the city away from. It would, yes, serve some public housing projects, as well as some job sites in Red Hook and at the Brooklyn Navy Yard. But Kimmelman’s promise for an investment of this magnitude of reaching “thousands” of struggling New Yorkers just doesn’t cut it in a city with nearly 100 bus routes that carry 10,000 riders or more each day. The project is clearly oriented towards some of Brooklyn and Queens’s wealthiest gentrifiers, not the New Yorkers who need it most.

New York’s outer neighborhoods are in desperate need for new transit, and even rail, and there are many good candidates for places to invest – crowded buses on Manhattan’s East Side and in Brooklyn are crying out for subway upgrades, and heavy freight and passenger lines in the outer boroughs are ripe for conversion to rapid transit operation as well. East Flatbush, South Jamaica and the outer reaches of Astoria may not be as trendy as the waterfront, but they’re where the riders and need are.

A Brooklyn and Queens waterfront streetcar is perfectly tuned to the urbanist zeitgeist. And it is, as Glen puts it, a big idea, with a 10-digit price tag. But just because it’s a big idea doesn’t mean it’s a good one.