New York’s Next Mayor Should Build Transit for the Boroughs, Not Globetrotting Elites – Next City

New York’s Next Mayor Should Build Transit for the Boroughs, Not Globetrotting Elites 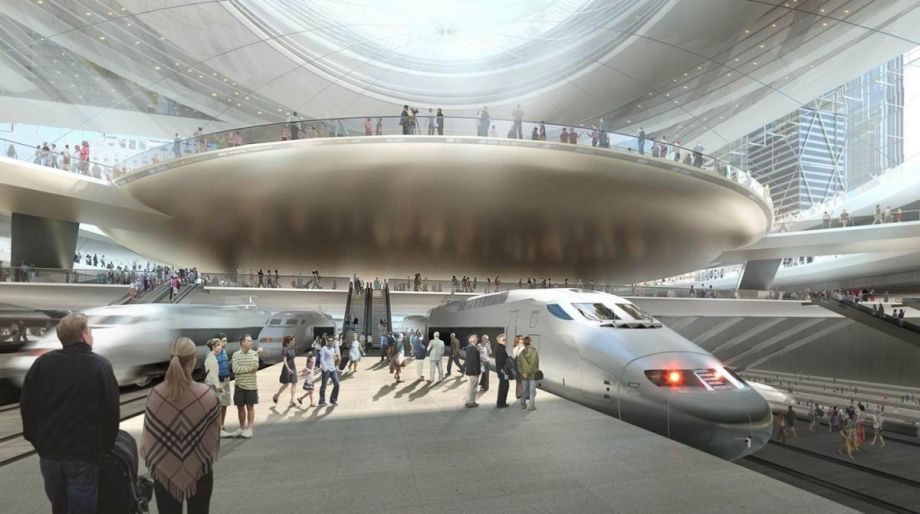 In yesterday’s paper, New York Times architecture critic Michael Kimmelman penned a to-do list for the next New York City mayor, who will in all likelihood be Democratic nominee Bill de Blasio.

“We’ve had a technocrat as mayor who speaks fluent Wall Street,” Kimmelman writes of Michael Bloomberg. “We could use a bard… Yes, the city benefits from attracting more rich people, but economic diversity is not just a campaign slogan.” He talks about “longtime African-American residents are quitting historic areas from Harlem to Fort Greene,” hitting all the right notes about inequality.

But when it comes to transit suggestions, Kimmelman ends up sounding more like a Hudson Yards office developer than the Times architecture critic whose most famous rave review went to a low-income housing complex in the Bronx.

He wants “a direct train to and from LaGuardia and John F. Kennedy airports,” a “one-seat” train ride as opposed to the current long and circuitous two (if you’re lucky). These multibillion-dollar projects are something that class A office developers salivate over, and they often get funded at levels disproportionate to the numbers that they serve. (The region hasn’t built many new transit projects in the past half-century, but billions have already been spent on the AirTrains at Newark and JFK.)

But the median household income for a New York City family is about $52,000. How often are they going to the airport?

Kimmelman also wants a new Penn Station — an emotionally charged subject for architecture lovers, but a project whose case is much harder to make on its transportation and engineering merits. A new headhouse would be a beautiful place for relatively wealthy suburbanites and Amtrak riders to arrive (a ticked to Philadelphia for next Thursday after costs $53, compared to $10 on BoltBus). But like one-seat rides to the airports, it’s not a project that would do anything to cure New York’s “tale of two cities” that de Blasio constantly evoked on the campaign trail.

Fortunately for a future Mayor de Blasio, the city has a wealth of transit needs in the outer boroughs and Manhattan above 96th Street to which he can direct scare city resources. These projects might not make a difference in the lives of newspaper columnists and business executives, but they would be lifelines for those who have been gentrified out of New York’s booming neighborhoods and mostly left out of its renaissance.

The most obvious project for the next mayor to tackle is the second phase of the Second Avenue subway. While the Upper East Side, with its enormous density, was a natural fit for the first segment, the second installment will run to 125th Street in East Harlem. It will serve 100,000 riders with very low incomes, and has been needed since an elevated line on the same street was closed in 1940.

As central Brooklyn neighborhoods like Bed-Stuy and Crown Heights have gentrified, they’ve become too expensive for many African American and West Indians, who have moved further south to neighborhoods like East Flatbush and Flatlands that are not well served by transit. Residents crowd onto bus routes on streets like Utica Avenue (which hosts the busiest bus route in Brooklyn, the B46) and Nostrand Avenue (whose B44 is the third busiest in the borough).

Subways were first planned for Utica and Nostrand south of the current 2/5 terminus at “the Junction,” as it’s known locally, more than a century ago. But as the city’s financial situation and the neighborhoods themselves deteriorated, these plans fell by the wayside. Nostrand is getting supposedly enhanced bus service later this year, but even that’s been bungled — some stretches go on for over a mile without seeing a stop, and local and express service will be split onto different streets in some places, cutting into effective frequency — and the 20 percent decrease in travel times seems highly unlikely for most riders.

If New York under Bloomberg could afford to spend $2.4 billion on the 7 train extension to a gleaming future neighborhood of subsidized class A office towers — siphoned off from the budget through a tax-increment financing scheme, but money that the city could have easily collected from office developers elsewhere — it could have afforded to fund a substantial chunk of the Utica and Nostrand lines instead, whose per-mile costs would be lower due to the easier terrain and lower density. Similarly, if a future administration can find money for a new Penn Station and trains to the airports, it can find money for new subways in this part of Brooklyn.

If these subway tunneling projects prove to be too much for the city budget to bear, there are still a number of existing railways that can be repurposed for rapid transit at relatively little cost. The most obvious is the so-called Triboro RX line, which would run through the Bronx, Queens and Brooklyn along freight lines. It’s never been formally studied by the MTA, but its backers estimate that it would serve at least 76,000 riders each day.

The federal regulatory hurdles to running light subway trains on heavy freight rail tracks are starting to melt away. For $1 billion or so, the city could have a second circumferential line that goes through three boroughs, making it possible to travel between far-flung neighborhoods by rail without detouring through Manhattan.

Another project that would make travel between boroughs easier, as well as help those who have been gentrified out to the far reaches of Brooklyn and Queens, would be a new subway line between downtown Brooklyn and Jamaica. Once the Long Island Rail Road’s East Side Access project is completed and the railroad starts running trains into Grand Central Terminal in 2019, it will no longer need to run suburban trains into Brooklyn to its Atlantic Terminal.

The Long Island Rail Road already plans on turning the line into a sort of shuttle service that takes riders from Jamaica to downtown Brooklyn via East New York and Bed-Stuy, but the next mayor should insist that the MTA hand over the line to the subway division. That way, it can be run as an integral part of that system, with frequency and fares just like any other line. (The LIRR hasn’t been totally open about its plans, but it seems to want to keep the shuttle as a relatively expensive and infrequent service without fare integration with the subway.)

No mayor will be able to turn the clock back on gentrification, but the next tenant of Gracie Mansion can make it easier for those priced out to East New York and South Jamaica to access jobs, family, friends, churches and transit hubs in their old neighborhoods.

Globetrotting elites might salivate over the possibility of stepping off of an airplane and into a train that will take them directly to a starchitect-designed Penn Station in midtown, but if the next mayor wants to make a meaningful difference in the lives of ordinary New Yorkers, he should listen to the outer-borough residents who make up the majority of New Yorkers. Not landlords, business travelers and architecture critics in Manhattan and brownstone Brooklyn.